One of the analysts at Stansberry Research called Brian Tycangco released a presentation about a new investment opportunity in Augmented Reality (AR) that he calls The iPhone Killer.

Brian focused on a new AR device that he expects Apple to reveal soon. He describes it as follows in the header of the presentation:

“Apple’s next highly-anticipated device could be revealed soon. A transformative gadget that will ‘change everything’ about the way you interact with the world. And if you make your move NOW… before its release, you stand to make massive gains as this projected $7 trillion industry takes off.”

Let’s take a closer look at Brian’s presentation to learn more about what he is recommending as well as his thought process.

Introduction to The iPhone Killer

The iPhone Killer is a presentation by Brian Tycangco where he talks about a breakthrough in augmented reality that he thinks we should care about.

He says that new, transformative technologies like AR headsets always sound unbelievable and unlikely to catch on until they do and it’s too late to invest. 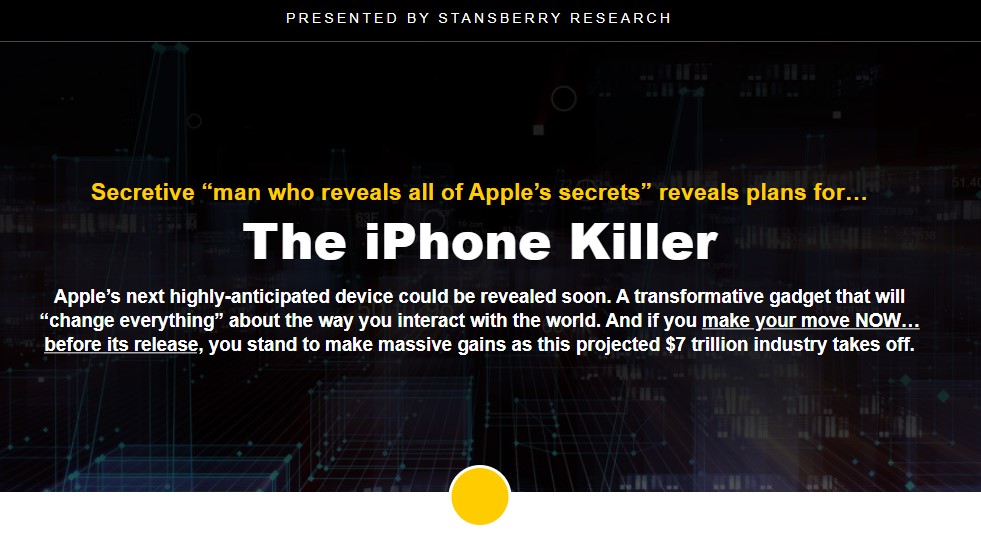 He says that the natural progression of technology is for computers to get smaller and more powerful and we are getting to a point when microchips are so powerful yet so small that the computer itself may disappear almost entirely.

Brian Tycangco believes that in a few years, you will be having immersive, interactive digital experiences using AR and it will be as seamlessly integrated into our everyday experience as the “1st & 10 line”

The 1st & Ten is a computer system that augments televised coverage of American football by inserting graphical elements on the field of play as if they physically existed. It helps the referees make more accurate decisions.

Brian Tycangco says that many companies have already started working on their versions of AR technologies and applications but none of those will impact the public psyche like Apple’s version. He says:

This is in keeping with the perception that Apple is a trendsetter because it has been the definitive player with regards to things like smartphones, smartwatches, and online music platforms.

Going back to the presentation, Brian Tycangco says that a tech analyst called Ming-Chi Kuo, who’s correctly predicted many other Apple projects and is regarded as “the most accurate Apple analyst in the world” expects Apple’s new AR device to be released in 2022.

According to Kuo, Apple’s forthcoming Augmented Reality headset will weigh between 3-10 ounces… be priced around $1,000… and provide a “video see-through AR experience.”

Essentially allowing you to use all those Augmented Reality functions your iPhone is already capable of… but instead of having to view them through your phone, you’ll be able to view it through lenses that still let you look out at the real world.

In the coming years, as Augmented Reality technology improves, and more consumers adopt it… you’ll eventually get to the point where you won’t even use a headset.

In fact, Kuo expects that in the next decade, Apple’s Augmented Reality headset will be replaced by contact lenses.”

He expects the technology to advance so fast, we’ll be using contact lenses for AR applications. Brian expects it to be bigger than the iPhone.

So, how does he want us to invest in the trend?

How to Invest in the AR Trend

Brian Tycangco says that Apple is not the right investment to make in this new tech trend although it will be the undisputed leader driving mainstream adoption of Augmented Reality.

Why is he not recommending Apple?

Because he feels that the biggest gains in Apple have already occurred.

Therefore, he wants you to invest in an Apple supplier that will help the company bring its AR tech to market.

This approach is not too dissimilar to how other investment gurus have recommended people to invest particularly when it involves a big company driving a major trend. I’ve seen it in presentations like Bill Spencer’s “Profits From The Apple Car,” “Apple’s Greatest Breakthrough Yet” by Ray Blanco, and “What Is Digitarium” by Ian King.

Brian Tycangco has identified a small company supplying Apple as it manufactures its AR headset. Here is how he describes it:

“It’s a small manufacturer less than 1/200th the size of Apple.

And it makes the tiny device components that I’m confident will power an Augmented Reality headset.

But even though it’s small and under-the-radar… this isn’t some risky penny-stock speculation.

In fact, this company is ALREADY one of Apple’s suppliers.

Its micro-speakers and mini camera lenses are already part of the iPhone. (And almost every other smartphone you can buy, for that matter.)

Which is why sales have shot up as much as 411% in the past decade.

And yet, because this company flies so far under the radar… almost nobody knows how critical its components are to the smartphone technologies we take for granted (and the Augmented Reality headsets that are about to hit the market.) Which explains why its stock has only doubled in the past 10 years.”

He expects this company to develop a user interface for AR headsets that will allow users to control them:

You see, the biggest problem when it comes to using Augmented Reality headsets is ‘clicking.’

On a computer, you use a mouse to point and click.

On your phone, you have a touch screen.

But neither of those really work when you’re talking about glasses.

And that’s what makes this company’s new breakthrough so exciting (and why I expect it to be a critical part of Apple’s Augmented Reality device).

For instance, imagine you’re watching a YouTube video and want to pause the video…

On your phone or laptop, you’d tap the pause button. Simple.

Well, when the new Apple Augmented Reality device comes out… with this company’s technology, you will likely just extend your hand, and press the pause button you see on your lap, or the table in front of you.

All you need to do is stretch out your hand, and this ultrasound speaker can pick up the movement of your arm and see where and when you’re pressing down.”

He says that if you invest before the official Apple announcement, you could see triple-digit gains. For that, he has put together a special report called The #1 Augmented Reality Component Maker: An Under-the-Radar Stock to Potentially Make Triple-Digit Gains as Apple’s New Augmented Reality Device Takes Off. 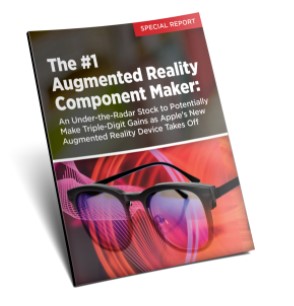 Inside, he names the company for those who want to invest in it. To get this special report for free, you have to subscribe to his newsletter: Visionary Investor.

Brian Tycangco is the investment analyst behind this presentation. He joined Stansberry Research in 2019 and has since been working alongside Steve Sjuggerud as an analyst for True Wealth Opportunities: China.

Brian Tycangco is based in Asia where he has lived his entire life. He has a Bachelor’s degree in Economics and has been working in the capital markets since 1995. He started his career in finance as a trader before later becoming a financial analyst with a firm called BNP Paribas.

Before he joined Stansberry Research, he was the editor of the Asian Growth Stocks advisory service for 17 years. He has close to 25 years of experience, with a focus on Asian stock markets, including China.

A closer look at the Visionary Investor Newsletter

The Visionary Investor is an investment advisory service run by Brian Tycangco where he reveals the investment opportunities he deems to be big. 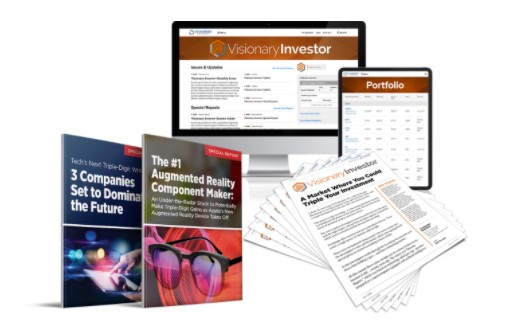 When you subscribe to the newsletter, you get monthly issues of the newsletter with new recommendations you should consider investing in.

In addition to the main report about the Apple supplier, you also get another report that has three tech companies with immense potential.

Tech’s Next Triple-Digit Winners: 3 Companies Set to Dominate the Future

The first one is a microchip manufacturer that could play a pivotal role in augmented reality. 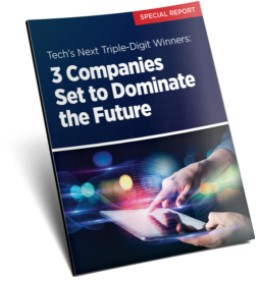 “This is one of the most essential companies that supply the inner workings of the $1 trillion consumer electronics industry.

It owns more than 3,000 patents, and is a critical supplier to all of the world’s biggest consumer electronic brands. Including Samsung, LG, Google, Apple supplier Foxconn, Hewlett Packard, and Microsoft.

Its components are used in everything from LCD displays and touchscreens on tablets to cameras on smartphones. And are ALREADY used in some of the earliest Augmented Reality devices hitting the market right now.”

The second company could become “the Microsoft of Augmented Reality”

“I’ve found another under-the-radar company that develops the software that makes it possible for you to have an iPhone without a home button. And makes a video game controller vibrate when your kid or grandkid plays their Xbox.

This company has more than 3,000 patents issued or pending and licenses its technology to all the big players in the tech sector — Apple, Google, Sony, Nintendo, and many others.

Its stock has as much as doubled in the past five years… but I think even bigger gains are in store — and could ultimately become a 10-bagger in the next five years.”

“I’ve found a company already working with 8 of the 10 biggest car manufacturers — and is a hidden way to cash in on the future of automotive technology. If you get in now, I think you could see 250%-plus gains in the coming years.”

You get that for free when you sign up for Visionary Investor.

How much is Visionary Investor?

In your first year of membership, you can pay either $49 (standard subscription) or $79 (premium subscription).

The advisory service renews every year after that at $199 per year. 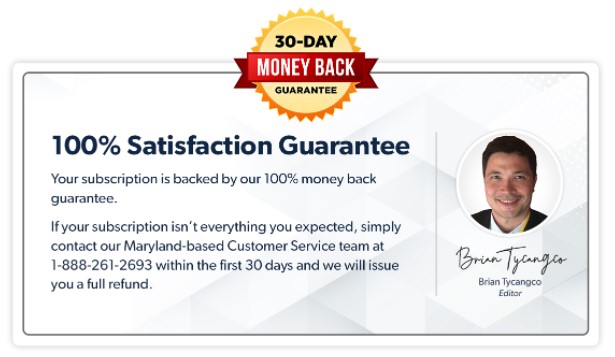 The Visionary Investor newsletter comes with a 30-day money-back guarantee.

Closing Remarks on The iPhone Killer

The iPhone Killer presentation centers on Apple’s launch of a new AR device that could define the market. Of greater concern to Brian is the investment potential that this launch presents because he thinks that making an early investment before everyone rushes in to buy the devices is the right thing to do.

He acknowledges that with such an explosive new technology, there are more companies than just Apple getting in on the trend. All told, he thinks that this new technology could grow into a $7 trillion industry in the next six years.

Therefore, he thinks it could be one of the biggest opportunities to make money.

But if you decide to follow Brian’s advice, ensure that you don’t invest more money than you are willing to lose because there are no guarantees in the market and his predictions could be inaccurate.