Ian King’s “The Next Million” is a webinar he’s been promoting where he intends to share his latest research concerning the crypto market.

He says that even as the market takes a beating, you still have the chance to get in on 100X gains as the crypto market surges from less than $2 trillion to $200 trillion.

In this piece, we look at what Ian King could be promoting as we learn more about his trading strategy.

What is Ian King’s The Next Million Crypto Event?

Ian King’s “The Next Million” is an event he has been preparing for and it is about investing in the cryptocurrency market. 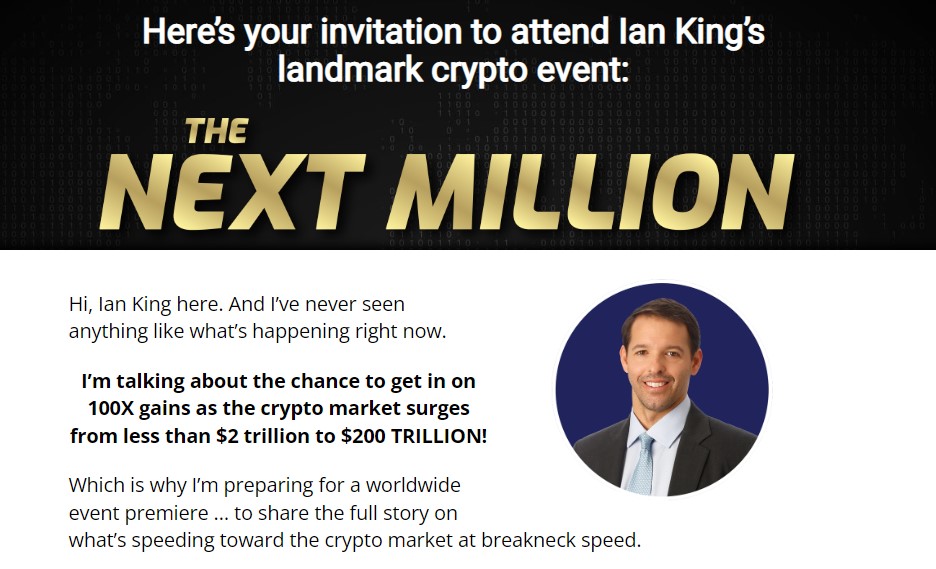 He says that there’s something that’s speeding toward the crypto market at breakneck speed; powerful forces converging to explode the crypto sector to $200 trillion.

At his crypto event, he intends to reveal what those forces are and share the exact trading strategy he says he’s been refining since he bought his first bitcoin in 2013.

On top of that, he will also reveal seven new crypto trades that he claims could kick off a million-dollar fortune for investors.

This is not the first time Ian King is hosting an event to talk about crypto. We’ve had run-ins with webinars from him like Crypto’s Third Wave and Profit Framing.

He says that his strategy is effective enough that during the 2020 crypto rally, had you invested $5,000 in each of his top seven picks, they would have handed you $1.3 million in pure profits in just 18 months.

In another instance, in December 2020, he recommended Solana when it was trading for under $2 and just five months later, he recommended selling half the position for over $34 – a gain of 1,900%.

Ian is careful enough to warn you that he can’t always replicate gains like that on every recommendation he makes but that he believes that we have entered a period where gains like Binance and Solana, like his new top seven trades may happen again.

He claims that the market is ripe and ready for those kinds of wins again and he doesn’t want you to miss out on any of that.

Ian King is an investment analyst who works for Banyan Hill Publishing as an editor of newsletters. He is a former hedge fund manager with over two decades of experience trading and analyzing the financial markets.

He started his career at 21 in the mortgage bond trading department at Salomon Brothers. He then went on to hone his skills in trading at Citigroup before spending a decade at New York-based hedge fund Peahi Capital.

His market insights have been featured on Fox Business News, Investopedia, and Seeking Alpha.

He joined Banyan Hill Publishing in 2017 to help readers get ahead of the markets. He heads up four advisory services, namely Strategic Fortunes, New Era Fortunes, Next Wave Crypto Fortunes, and Profit Point Alert.

Closing Remarks on Ian King’s The Next Million Crypto Event

Ian King’s “The Next Million” Crypto Event comes at a time when the cryptocurrency market is in turmoil. Since mid-2020, cryptocurrencies and other digital assets related to it have been bullish. Cryptocurrencies in general have skyrocketed in price to unprecedented heights.

Taking the example of Bitcoin, after starting 2020 at about $8,000 a unit, and slumping to just over $5,000 in March, the crypto was on a roll, and in December, it reached $20,632, an all-time high. After that, it kept growing and it all came to a head in November 2021. Since then, Bitcoin and other cryptocurrencies have been in a slump, shedding a lot of the value that they built up during the bull run.

Analysts have been asking whether we are in for a repeat of 2017 where we witness a more giant bubble, barrelling towards a louder pop.

Predicting the cryptocurrency market is always hard, but some believe that the current situation is different from 2017. Back then, the crypto boom was characterized by a novel, little-understood technology, unrealistic promises of endless revenues, and scores of small-time investors burning their savings.

This time, there is institutional money involved and investors have been less skittish. Then there are guys like Ian King who believe that the best is yet to come and his event is emblematic of that.