I recently stumbled across a teaser by Ian King with the heading “The Big Rip.”

The header, which reads “Millions of Investors Will Soon Be Devastated By ‘THE BIG RIP’ That’s why you must abandon — right now — the one investment everyone believes is 100% safe…” suggests that we are about to witness a big event that will shift the dynamics of the market.

It also implies that there is one investment we should stay away from.

After sitting through the whole thing, I decided to write this article to highlight the main issues that Ian was talking about in the presentation to help you better understand what he requires of you.

Ian King claims that there is going to be a big transfer of wealth that will create an investment opportunity for savvy investors.

Here is how he describes it:

“Something extraordinary is about to happen in America.

An extraordinary amount of money — all told, over $34.4 trillion — is on the move…

From one industry to another…

From one community to another…

And from the hands of many into the accounts of a few well-positioned Americans.

It’s a monumental transfer of wealth.”

And he believes that it will create a massive investment opportunity:

“And to show you, that if you make this simple adjustment now, you could walk away with three times your money in the next two years, at a time when many Americans will lose everything they’ve worked so hard for.”

First, he has a bone to pick with the “mainstream news media” which he says has abandoned objectivity for provocative headlines that appeal to certain beliefs. He acknowledges that they have been pressured into publishing sensational stories to keep people interested because they have been losing clients and ad revenue.

However, he blames them for sharing misleading advice. He presents an example:

“And this is why whenever our country hits a speed bump, many prefer to sit tight in cash — a so-called ‘safe haven’ asset — waiting until what’s happening with markets, the economy and our country becomes clear.”

And he believes mainstream media has all to do with that:

“They want to scare you into inaction … so you’ll just keep on reading and watching … and waiting for them to tell you what to do next.”

That being said, he believes hoarding cash is “a huge mistake” that will result in investors missing out on a great investment opportunity as it has happened in the past.

Nevertheless, he believes their greatest undoing has been how they cover the technology sector. To quote him:

“Perhaps nothing is as inaccurate … as puzzling … or as damaging to the average American as their false coverage of emerging technological trends.”

He gives examples of how they got it wrong with their projections of Apple’s (AAPL) performance as it was releasing the first iPhone and how they have been wrong about Elon Musk’s Tesla (TSLA).

And now he believes that they are misrepresenting the facts about the wealth-creation opportunities in the technology sector.

Why you should invest in the technology industry

Ian goes on a tirade explaining why tech has emerged as the leading industry in terms of wealth-creation and investment opportunities.

He even says that the biggest gains are yet to be made and points at “one core innovation leading the way.” He reassures you that you have not missed the boat if you haven’t invested in the myriads of opportunities that it has offered so far.

Why is he so optimistic about tech stocks?

Fry’s belief is based on the discovery of a research group:

That, according to Ian King, is what led to the discovery of something called the “idea multiplier.”

The gist of it is that those researchers have found a way to analyze data to determine how impactful any field of technology will be in the future.

He says that they have looked at 14 areas and found that ten of them show an increase in the idea multiplier.

This means that technological innovation and productivity is about to go up:

“In short, all the technological innovation, and productivity growth we’ve seen over the last three decades, is about to grow threefold from 0.4% per year to 1.2% over the next five years.”

And he gives examples:

Therefore, he believes that we are about to witness “a golden age of technological advancement” that will create massive wealth, and he wants his followers to take advantage of it.

“The $34.4 Trillion Rebirth” (A disruptive innovation to invest in)

Ian King has set his sights on one innovation amid all the optimism:

“Because there’s one emerging innovation that is more disruptive and more lucrative than just about anything I’ve seen, in or out of tech.

It’s set to create $34.4 trillion of economic disruption in the years to come…

And could be the largest change to finance in 500 years.”

He claims that it will make banks obsolete and create a currency that can replace money as we know it.

He expects Bitcoin to go higher despite the negative coverage it has been getting from the press (this is why he began by talking about an untrustworthy mainstream media).

How to invest during “The Big Rip”

King has identified three steps you can take now to take advantage of the growing importance of blockchain:

Step 1: Invest in the “Bitcoin Enabler”

King wants you to invest in a “trailblazer company bringing bitcoin and blockchain to the masses.”

Any clues that can help us figure out the fintech company’s identity?

He offers a couple:

But last year, just seven years later, it recorded revenues of over $4.7 billion.

That’s an extraordinary growth story on its own…

But consider the simple tweak the business made during November, 2017.

At the time, its development team released a quiet update that allowed users to buy and sell bitcoin.

And since then, the business has grown exponentially.

“For one thing, it’s giving its user base, largely younger millennials and more than 64 million businesses, a chance to do one thing they want most: live and do business without banks.

In fact, users of its service no longer even need cash, but can make payments, transfer money, take out loans and yes, trade bitcoin with invisible, wireless payments.

And just last year, it released an update to its service that made business bank accounts unnecessary for 21 million small businesses across America.”

It also filed a patent, U.S. Patent No. 10,540,639 that will allow its clients to transact different assets at the same time. This means that you can pay someone in US dollars and they receive it in bitcoin.

The fintech company he is talking about is Square Inc. (SQ).

He has written a report about it titled Your Tech Advantage: How to Make up to 200% on a Trailblazing Fintech Stock. This dossier has all the details you need to learn about the company as well as how you can invest.

The second step has to do with investing in bitcoin in the long term.

He has prepared a report called Making $1 Million: How to Buy Your First Bitcoin that shows you how to trade bitcoin.

The final step is subscribing to his newsletter, Automatic Fortunes.

Ian King is an investment analyst and professional trader who works for Banyan Hill Publishing as a newsletter editor.

He began his career as an intern at Merrill Lynch in the nineties. He then worked for Salomon Brothers and later, Peahi Capital (a hedge fund based in New York).

King has been active in the financial service industry for the past twenty years and his job has been looking for overlooked assets that investors can profit off.

For example, he was at Peahi Capital during the 2008 Global Financial Crisis and while most investors lost money, his team recorded an annualized gain of 261%, which was remarkable during a crisis.

This shows that his specialty is finding ways to profit in any market, boom, or bust.

One way he does this is by discovering emerging technologies before they go mainstream similar to strategies in Fry’s Investment Report.

The whole point of the presentation was to promote the newsletter, Automatic Fortunes. 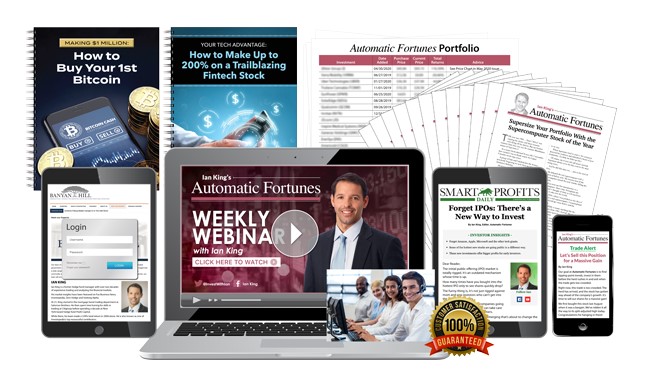 Ian King says that he uses a four-step system to uncover lucrative technological trends that his subscribers can take advantage of for huge returns.

If you sign up for Automatic Fortunes, you can expect to receive:

What does it cost to join Automatic Fortunes?

The annual subscription fee is $47 although Ian says that it is usually $199.

You can ask for a full refund at any time during your one-year subscription. In simple terms, it has a 12-month money-back guarantee.

Closing Remarks on “The Big Rip”

Although Ian King released the presentation to present Blockchain as a game-changer for investors, he gets into a long-winded discussion about the merits of getting in on technology (as a viable opportunity to generate wealth). He also decries the role that the mainstream media has played in scaring investors into pulling out of the market (and hoarding cash) and therefore missing out on big investment opportunities.

He expects the blockchain to inject up to $34.4 trillion into the economy and sees cryptocurrencies and fintech companies as good avenues for investment. He has earmarked one fintech that has been making bitcoin more accessible to the market through innovation.

The caveat to all that is that you have to sign up for his newsletter, Automatic Fortunes. The newsletter mainly doles out investment advice centered on major technological shifts. It costs $47 per year and it has a 12-month money-back guarantee.