Special Purpose Acquisition Companies have been getting a lot of attention lately.

Many analysts and gurus have written and spoken about them extensively. Now it’s Ian King’s turn to give his take on the trend.

He will be sharing his insights at a special extended webinar called Ian King’s Private SPAC Portfolio. In this article, I will be previewing the event and revealing what I think Ian is likely to discuss at the event.

The Banyan Hill has been promoting Ian King’s Private SPAC Portfolio webinar as a “can’t miss” event so when I got an invitation to it, I decided to take a closer look to find out what Ian was expected to talk about.

As it turns out, Ian intends to reveal his new strategy for navigating the SPAC market.

What is a SPAC?

A Special Purpose Acquisition Company (SPAC) is a shell corporation that is created without any predefined commercial operations. It is created to raise capital through an IPO to acquire or merge with an existing company, typically a private company.

A SPAC is also referred to as a “blank check company.”

SPACs have been around for decades but they never got anywhere near the attention they have been getting for the past two or so years. For example, in 2010, only two SPACs were brought to market. 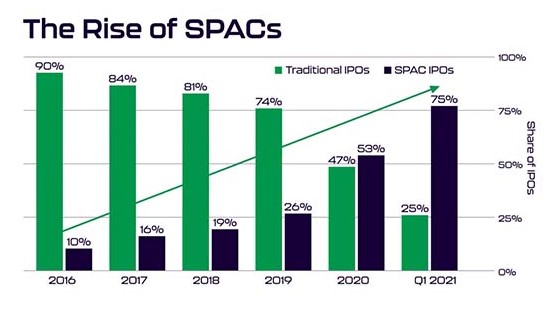 Ian King points out that the fastest-moving private companies in the world have been sidestepping traditional IPOs, choosing to go public through a SPAC deal. This has led to a decrease in the number of traditional IPOs since 2016.

Therefore, to say that the SPAC market is doing well is an understatement. It has blown up.

It is no surprise that newsletter publishing houses have released advisory services like Blank Check Speculator and Empire SPAC Investor.

But why are SPACs all of a sudden so popular?

Besides being favored by private companies as a vehicle for going public (rather than through an IPO), SPACs have gotten popular because there have been continuous improvements in investor protections.

What will be discussed at Ian King’s Private SPAC Portfolio?

At his SPAC Portfolio webinar, Ian King will reveal:

Ian will also allow you to sign up for one of his services for a discounted fee.

Ian King’s career in finance began at the age of 21 when he joined the mortgage bond trading department at Salomon Brothers. He also worked for Citigroup as well as for a New York-based hedge fund called Peahi Capital.

His market insights have been featured on Investopedia, Seeking Alpha, and Fox Business News.

Ian King’s Private SPAC Portfolio is a highly anticipated event during which Ian will give his take on SPACs. He is expected to reveal his investment strategy concerning SPACs.

SPAC deals have received a lot of attention, particularly in the last few years. Although SPACs were around for decades, they caught on in 2020 and show no sign of slowing down.

But even with all the money that can be made in SPAC investments, investors who dive in without a strategy could be putting their money in danger. Many deals are not great and you have to determine that before you invest.

Ian King will reveal how he approaches these investments. He will even share details on three of his favorite SPACs. I think the event is worthwhile for anybody interested in SPAC investments. Whether or not you fancy Ian’s work you’ll want to see what he is up to because you may learn a thing or two from his approach.