You’ve probably received an email from Banyan Hill concerning a presentation by Ian King about something called “MaaS.”

In the header of the pitch, it says that “’MaaS’ will be the biggest tech trend of 2021” and so in this presentation, we will find out what MaaS is and why Ian King is hyping it up this much.

What is Ian King MaaS? (The Pitch)

Ian King recently did a pitch about “MaaS.” He mentioned that it is a $70 billion technology that may grow into a $1.8 trillion behemoth allowing early investors to make a lot of money.

So, what is MaaS?

It is an acronym for “Mobility-as-a-Service.” 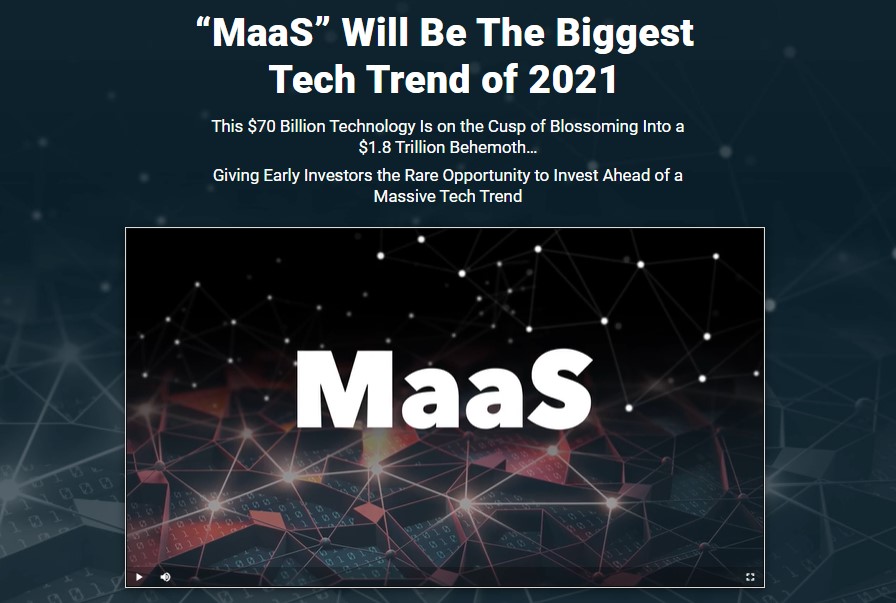 He is saying that we will have self-driven electric cars moving around that will make transportation seamless and safer. It is a concept that has been proposed by Jeff Brown in a presentation about Elon Musk’s SAV and Whitney Tilson in a pitch called TaaS.

He says that electric cars are coming of age and getting cheaper, self-driving tech is making major strides, and efficient semiconductor technology will bring it all together to make Mobility-as-a-Service a reality.

He mentions that many investors and other players are starting to take this seriously with companies like Google, Amazon, and GM taking an interest in autonomous cars, for example.

Now that he has identified MaaS as a major trend, what companies does he want us to invest in?

Well, he says that companies like Google, Microsoft, and Amazon, which are involved in some way would be the safer picks. However, the biggest gainers will be companies that will not feature in news headlines.

He has identified one that he thinks will do well. It builds the LiDAR technology used to create a 3D representation of the car and its surroundings. Here’s more from Ian about this:

“These sensors essentially tell a car when to use the brakes, accelerate, or turn the steering wheel.

This tech is called “LiDAR,” and it’s a critical component for self-driving.

And my No. 1 stock for the mobility revolution is the biggest player in this space.

And it already has contracts in place to supply this technology to major car companies like Uber, Volkswagen and Toyota, just to name a few.

And GM relies on it for the self-driving Cruise model.”

It has some significant clients in the Electrical Vehicle space and patents for its tech. Then he continues:

“It already has $800 million in contracts booked through 2024 … but the company has a market cap of just $3.8 billion dollars, which is tiny compared to other tech behemoths.

In fact, its revenue is expected to surge over six times between now and 2024.

Bottom line, the time to invest in this stock is NOW.

Its stock trades for under $30 a share, but I do not expect it to stay there for long.”

He has written a report about it titled Mobility as a Service: A $1.8 Trillion Revolution and he wants to send out free copies of it to people who join his newsletter, Automatic Fortunes.

So, what company could he be referring to here? There are a few candidates because the LiDAR market is quite saturated with companies like Argo AI (a private company) standing out. However, the company that matches the description best is Velodyne Lidar (VLDR).

It is based in Silicon Valley, has worked with more than 300 customers, and sells sensors meant for autonomous vehicles. Its technology is used for mapping, robotics, infrastructure, and smart city applications. It is a pretty old company and it spun off Velodyne Acoustics.

Ian King must have shot the video a while back because Waymo has started developing their LiDAR tech (although Velodyne supplied them before). On top of that, the last time it traded at $30 per share was in September (I am writing this in early March). It has since dropped in value due to wider-than-expected quarterly losses.

Ian used to work on Wall Street before he got into newsletter editing. For example, during the Global Financial Crisis, he was the head trader at a hedge fund that thrived while others were losing money.

He claims that he left his cushy job to help Main Street Americans achieve the same results as the Wall Street fat cats.

Over the years, he has appeared as a talking head on Fox News and has shared his views via Yahoo Finance and Forbes.

Automatic Fortunes is one of the financial newsletters published by Banyan Hill. It is headed up by Ian King.

It gives you access to all of Ian’s research and the investment opportunities that he uncovers each month. He claims that he provides hedge-fund-level insights and applies the stock-picking strategies he used for his wealthy clients.

He claims that all his stock picks have to meet four criteria:

He says that his MaaS pick meets the four conditions.

In addition to that one stock, here is what you get when you sign up for Automatic Fortunes:

You also receive free copies of other special reports Ian has sent to his subscribers in the past.

How much do you pay to join Automatic Fortunes?

You get to pay $47 for a one-year subscription if you join via the presentation.

It has a 12-month money-back guarantee.

Mobility-as-a-Service is a new tech trend that newsletter editors have started picking up on. Ian King, like his peers, sees a future where driverless cars will revolutionize transportation and he appears to be in a rush to call it (to tell us a few years down the line that he was among the first people to notice this trend).

To be fair to him, fully driverless cars are inevitable at this point. The problem is that right now it is hard to tell when they may become a reality. Some experts think we may see something resembling MaaS in ten years, others see it taking longer.

However, since he has decided to focus on LiDAR technology, some companies are making money off of it right now. But the industry is saturated and it is hard to tell which companies will do well and which ones won’t.

If you are sold on Ian King’s recommendation, do not invest more than you are willing to lose because investing is inherently risky.