I recently stumbled across an invitation to a presentation promoting Adam O’Dell’s Home Run Profits.

When you join his advisory service, he states that you stand to benefit from his advice, which has in the past earned him massive gains in a matter of days.

After researching how his investment advisory service works and what you get when you sign up for it, here is what I was able to uncover.

What is Home Run Profits?

Home Run Profits is an investment research service that is edited by Adam O’Dell. His firm recently released a presentation in which Adam was interviewed by in-house Money and Markets contributor, Charles Sizemore during which they discussed Adam’s investment philosophy.

The presentation was meant to promote the advisory service by giving Adam the chance to explain the methodology behind it. 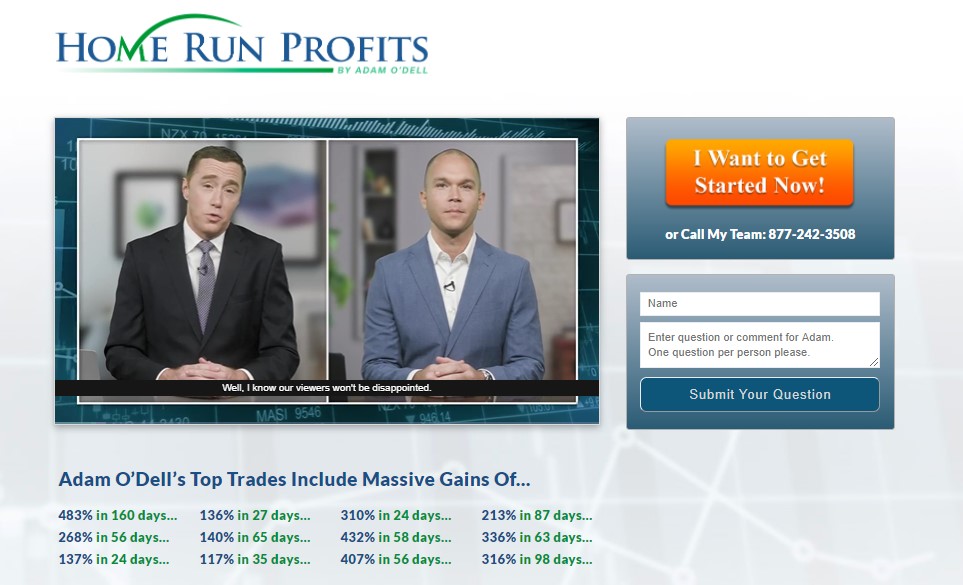 The presentation starts with Charles pointing out that the market has been bullish since 2012. He notes that investors who played the long game and invested in an index fund back then have earned gains consistently.

But impressive as that has been, he states that another group of investors that have been working with short-term trades has done significantly better.

The discussion then segues into Adam O’Dell breaking down his proprietary investment strategy. He starts by telling us how he formulated the Home Run Profits strategy:

“That’s right. I originally designed my Home Run Profits strategy back in 2012. A Harvard economist recruited me for that exact purpose actually.

His community had a core portfolio of solid investments that would do well in economic booms and busts.

But he wanted to help his community take a sliver of their portfolio and make home run profits. He wanted to give them the chance to also make these massive gains, fast … but, without all the risk.”

He openly admits that the strategy is not designed to dominate your portfolio. Instead, you should only allocate a tiny portion of your portfolio to these speculative trades and leave the majority of your money in safe, long-term investments.

He has a way of striking that balance and it is relatively simple: when he invests in a stock, he takes some money out of it after it has earned a profit and maintains a partial stake to earn more gains down the line.

How does Home Run Profits Work?

As for managing risk, here he is explaining how he does it:

“That’s right. Now, everyone knows that all investing carries risk. But, I also knew with the right steps, like selling half positions early, using options, and integrating various technical indicators, I could reduce that risk.”

When Charles asked him about the key features of the strategy Adam says that his system utilizes long-term and short-term momentum to determine when stocks are about to start soaring. Here is how he explains it:

“So let me break that down.

The second thing I look for is short-term momentum: This is when there is a strong surge in new buyers that catapult the stock higher.

And when these two metrics … longer-term momentum and short-term momentum … converge … when they cross each other, a stock usually explodes higher.”

He even has a diagram illustrating this: 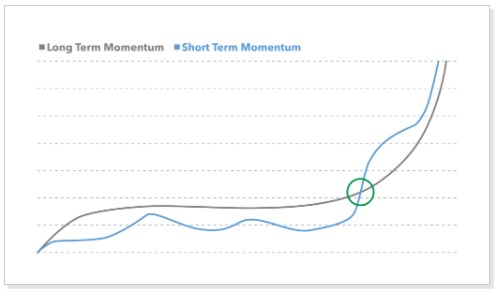 Although I am not quite sure about this, I think he may be using long-term and short-term moving averages; referring to them as momentum. And he is not the only investment guru to use it as we saw it used by Michael Carr in his Strike Zone presentation to predict short-term price movements.

Although he first developed the system in 2012 for the Harvard economist, he has since upgraded it:

“So, I added a new step to my system.

The company must score a 75 or better on my Green Zone Rating system.”

And that begs the question: what is the rating system based on?

Adam says that he bases it on 50 different financial metrics. This includes things like fundamentals, volatility, whether a company is overvalued or undervalued, and other factors that he refuses to reveal.

Once he has found a stock that fulfills his metrics, Adam doesn’t buy it directly. He trades options on it. Options allow him to make more money on his trades and he can earn a profit whether the market goes up or down.

Speaking of his options strategy, he says that he strives to get two things right: the direction (of the stock) and the timing (how long it takes for the stock to move in the desired direction).

He admits that he doesn’t get it right all the time but since he has been trading options for a long time, he has “got it down to a science.”

Who is Adam O’Dell?

Adam O’Dell is the chief investment strategist at a boutique investment research firm called Money and Markets. It is based in Florida and as per its mission statement, it was established to help Main Street investors achieve the same kind of returns as the Wall Street investors.

Adam is a Chartered Market Technician (CMT), a professional designation given to a small group of technical analysts who meet certain requirements and pass the relevant exams.

His specialty as an analyst is to design trading systems that enable him to analyze the market and spot trends that can potentially earn him profits.

The last time I reviewed his work, he was urging investors to consider investing in “A9 Gold Stocks.”

He speaks at global investment conferences and sometimes appears at major media networks as a commentator where he discusses emerging trends.

What you get when you join Home Run Profits 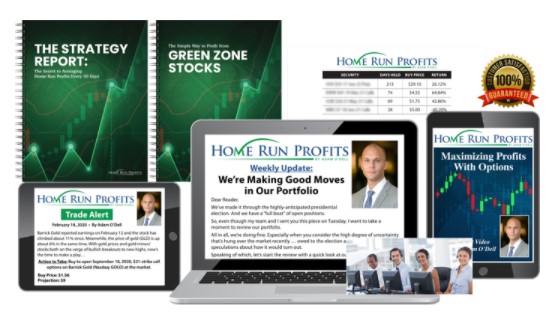 When you sign up for the advisory service, you get:

How much do you pay to join Home Run Profits?

No, there are no refunds.

What they have is a guarantee that if Adam doesn’t average a 100% win every month for the duration of your membership, you get the next year for free.

Home Run Profits is an investment advisory service run by Adam O’Dell and published by an independent firm called Money and Markets.

The firm released a presentation to promote the newsletter by explaining to us how Adam operates. We learned from it that he times the market and trades options.

To time the market, he uses “long-term momentum” and “short-term momentum” – which probably refers to long-term and short-term moving averages (I could be wrong). He incorporates another layer to his analysis; a stock-rating system. We find out that this enables him to add fundamental analysis to his philosophy.

We learn that he trades options rather than stock and tells us that one good thing about his options approach is that it enables you to make money when stocks stay flat, go up, or go down if you anticipate the right moment to make your move.

Disappointingly, this is no different from virtually every other options strategy that we have covered from other options trading gurus.

Before you sign up for the newsletter, do more research into it to learn how it works and what other people are saying because the $1,495 you pay for your membership is non-refundable.