The “Halo Fi” presentation by Ray Blanco introduces us to a new form of the internet (Halo Fi internet) that will be faster and cheaper than cable internet.

In this article, we will delve into the presentation to tease out what Ray Blanco means when he says that a new “Rooftop pod” will deal a death blow to “The big 3 cable companies.”

We will also establish what this has to do with you from an investment perspective and what the presentation is advertising.

What is Halo Fi?

Ray Blanco’s “Halo Fi” presentation is riddled with promises of making the most of a new internet phenomenon that can make you rich:

“Turn a single paycheck into $110,661 when America’s most hated monopoly finally goes six feet under?” 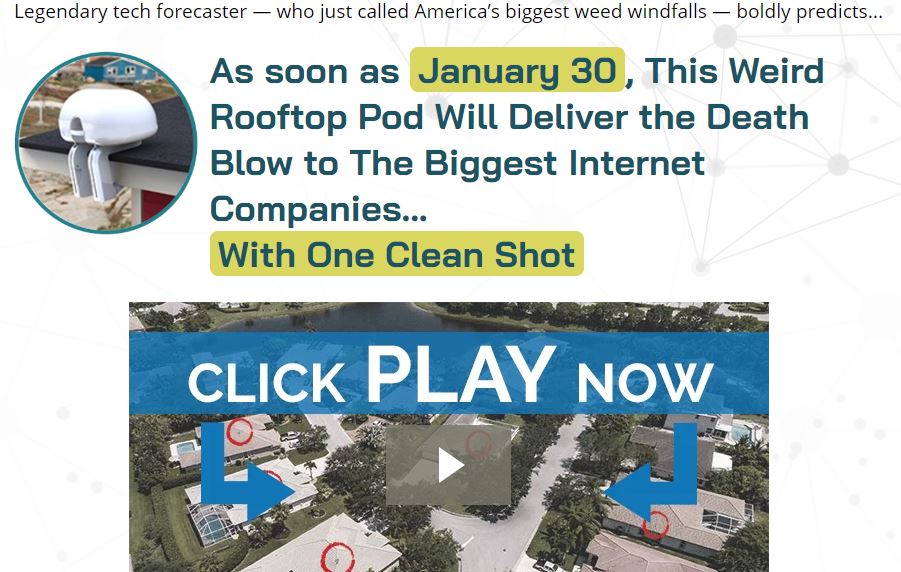 It will also provide you with a reliable connection even when you are in a remote location like the mountains or out at sea where you’d typically not expect to have fast internet.

The secret to this is Low Earth Orbiting (LEO) satellites, which Ray refers to as “micro-routers.” These are specially designed satellites that deliver fast internet to areas where fiber optic cables cannot access.

“A stunning breakthrough in something called ‘L.E.O. transmission’ is about to snap up most – if not all – of that hugely profitable market and make technological history.”

They orbit far closer to the planet than the usual satellites. Their advantage over other forms of internet infrastructure is that they make low latency internet affordable:

“It Takes Just Three Halo-Fi “Micro-Routers” to Cover an Area the Size of India …“As this company is about to prove, it could take as few as 648 micro-routers.”

Speaking of LEO satellite internet, other companies have shown interest in it. Some noteworthy names to join the club are SpaceX, Amazon, and Facebook.

A Tiny Private Company to Watch Out For

If you would like to make money off of the $251 billion internet market, Ray Blanco says that you need to invest in a small private company that has been making the right moves in the satellite internet market:

“And at the center of it all sits a tiny, privately-held company that holds the exclusive legal rights to use their technology to connect every human on the planet – with the virtual flip of the switch.”

This statement means that it has the rights to the spectrum needed for satellite internet connections. According to first come first serve ITU rules, not even regulators can force it to share the spectrum with competitors.

It already has noteworthy investors as Ray highlights:

“* Virgin Group * Airbus * Qualcomm * And even Coca-Cola… have poured nearly two billion into launching the specific technology I’m going to tell you about today.”

Furthermore, it is ahead of its competitors in terms of launching LEO satellites and it has a high-volume assembly plant to churn out the satellites it needs for the project.

Ray believes that if you invest in it, it could bring you gains of 5,349% even if it only ends up controlling 10% of the global market.

Who Is Ray Blanco

Ray has a background in technology because he spent ten years working as a network technician and systems analyst. He graduated from Hodges University with a bachelor’s degree in information technology.

He joined Agora Financial in 2009 after demonstrating an ability to marry his tech background with financial expertise.

He spends a huge chunk of his time looking for the next big thing in technology. He aims to help his followers, who are mostly retail traders, to stay ahead of the curve.

He also dabbles in the cannabis industry.

What Is Technology Profits Confidential?

Although Ray spends the bulk of the video talking about the new internet technology, his end goal is to get you to subscribe to his investment advisory service, Technology Profits Confidential.

He sets it up so that you have to sign up for the newsletter if you would like to learn more about investing in Halo-Fi; he is giving new members of his service a free digital copy of Halo-Fi’s One-Two Profit Punch”: A Double Play Strategy for Capturing a 5,349% Windfall.

The report delineates the strategy you should adopt to make money off of Halo-Fi before and after the company behind it goes public:

“Because I’ve developed a ‘one-two’ profit punch” strategy to capitalize on this world-changing technology before AND after it makes its way onto the public markets.”

In addition to that report, you will receive a few other benefits when you subscribe to the Technology Profits Confidential. These include:

The annual membership fee is $49 and it comes with a six-month, money-back guarantee.

The premise of the presentation, other than get you to subscribe to Technology Profit Confidential, is to introduce you to the concept of “Halo-Fi internet.” That’s just a fancy word for satellite internet.

Ray Blanco expects satellite internet to be faster and cheaper than the conventional cable internet. This, as he puts it, could run major cable companies out of business.

He teases a secret company (whose details are in the special report given to subscribers for free) as the proponent of “Halo-Fi” internet.

Since it is (was) set to go public, the goal is to show you how to buy a stake in it before it goes public and its shares when it does an IPO.