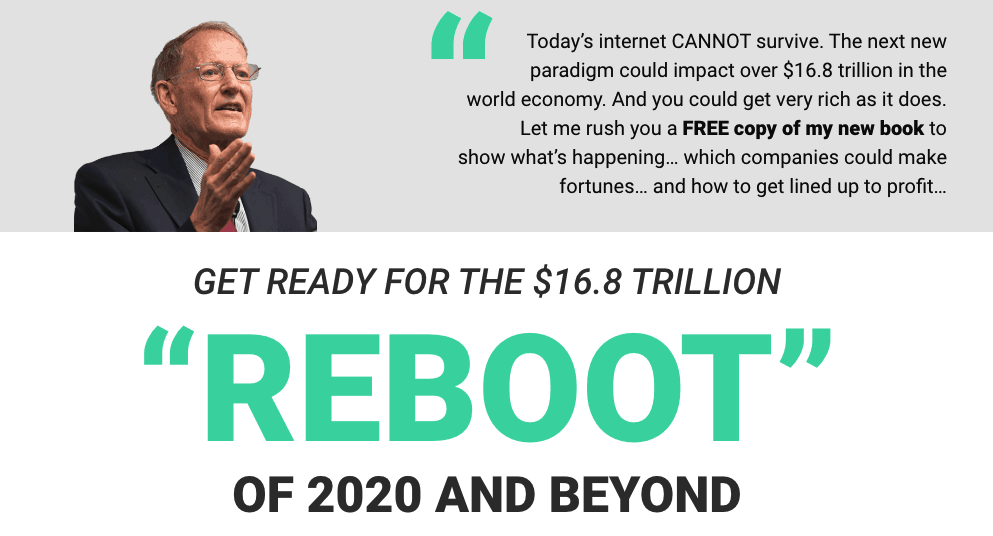 What is George Gilder prediction 2020?

As the title of the article indicates, today I will be taking a closer look at Gilder’s Internet Prediction.

I am referring to the presentation with the heading:

In this article, I will walk you through the presentation, highlighting the main points George Gilder raises about the future of the internet.

This will enable you to decide whether or not you believe in him enough to subscribe to his newsletter.

But irrespective of the title you assign it, George shares his thoughts on how he thinks the internet will shape up.

He also uses it to advertise both his book, Life After Google and his investment advisory service, The George Gilder Report.

He points out that the most successful tech companies in the world are built on a flawed system because it is based on big data. Companies like Facebook, Google, and Amazon are susceptible:

“Every one of our biggest companies today — Apple, Facebook, Microsoft, Amazon and, of course, Google — is a tech titan that’s built their empire on what most of us know as “Big Data.”

“That is, they feed off of the information we give them. They give away their services in exchange for advertising dollars.”

He believes that however infallible they seem, the data-obsessed foundations of these companies will give in.

He quotes his seminal book, Life After Google, liberally throughout the presentation on this subject. In one of the excerpts, he notes that Google’s model is flawed. The following quote is taken directly from his book:

Therefore, the biggest threat to the modern internet is its poor security features. It wasn’t designed to be “a gigantic encyclopedia,” which explains numerous incidences of data breaches:

As it stands, literally billions of items of personal data is hacked every year. The Google model cannot last. It’s destined to crumble.

The Cryptocosm: A New Breed of Companies to Take Over

As he writes in his book, he believes that this breed of companies will die off and be replaced by a new generation of companies built on what he calls The Cryptocosm.

The Cryptocosm is a term that George coined to refer to a network of individuals, institutions, and companies that is powered by blockchain technology, whereby decentralization and security are the core considerations.

“The cryptocosm is what I call this new ‘system of the world.’ As you can guess, it gets its roots in the cryptographic revolution that gave us Bitcoin.”

He posits that it will render entire markets obsolete and create new ones in a “global reboot.” It will power AI, IoT, and autonomous cars.

New companies that have been working on more secure systems than what we have now will emerge and replace the current crop of dominant companies.

Who Is George Gilder?

George Gilder is an economist, author, and tech analyst. He has been active in the finance industry for more than four decades. He had initially retired in 2007 only to reverse that decision and get back to speculating and sharing his insights.

He is revered in the tech industry and has the ear of some of the world’s leading innovators.

George garnered a reputation for making bold predictions about the biggest trends in the technology sector.

Some of them have been spot on. For example, he predicted the advent of the smartphone in 1994 in his book, Life After Television.

He has published 19 books, including Life After Television, Knowledge and Power, Wealth and Poverty, Life After Google, and The Scandal of Money.

He met President Reagan in 1982 and showed him one of the earliest microcomputer chips. Reagan also read his book, Wealth and Poverty, and was so impressed, he handed each of his cabinet members a copy.

What is The George Gilder Report?

As I mentioned at the beginning, the end game (of the presentation) was to get you to subscribe to the George Gilder Report.

During the presentation, George references Life After Google multiple times. He promises to send you a hardback copy to you for free if you agree to subscribe to the George Gilder Report (He covers all expenses including shipping).

He also intends to send you “Life After Google: The Missing Chapter,” which is a bonus chapter that is not on the book. In this chapter, he provides you with a few more investment opportunities that are cryptocosm-based.

The George Gilder Report gives you access to new issues of newsletters every month and a few other benefits, including:

George Gilder is known for predicting the future of the tech industry. His book Life After Google is the centerpiece of the presentation.

In it, he talks of how the internet is set to witness a paradigm shift that will alter the way things work while creating a new set of companies to replace the obsolete ones.

He sums it up this way:

“Today’s internet CANNOT survive. The next new paradigm could impact over $16.8 trillion in the world economy.”

He spends a good chunk of the presentation touting his book. Ultimately, he promises to send you a free copy if you subscribe to his premium newsletter.

To be fair, the book was well-received. The Financial Times named it the book of the month and it was No. 2 in China.

It was also the No. 1 bestselling book on Amazon in the crypto section when he initially published it and, as I write this, it is the No. 1 best seller in Big Data Businesses (Amazon).