Have you encountered the George Gilder 15G Stocks presentation?

“Don’t invest in 5G stocks or even buy yourself a 5G smartphone… until you’ve heard about this chance to triple your gains on the same tech revolution.”

In the pitch, he reveals his 5G picks although he refers to them as 15G stock picks (I explain why he does this and what it means).

Additionally, I will walk you through the presentation and highlight how he described each of those stock picks. I also share the details of his new financial newsletter.

What are George Gilder’s 15G Stocks?

From that title, it is quite clear that the presentation concerns 5G, albeit indirectly. 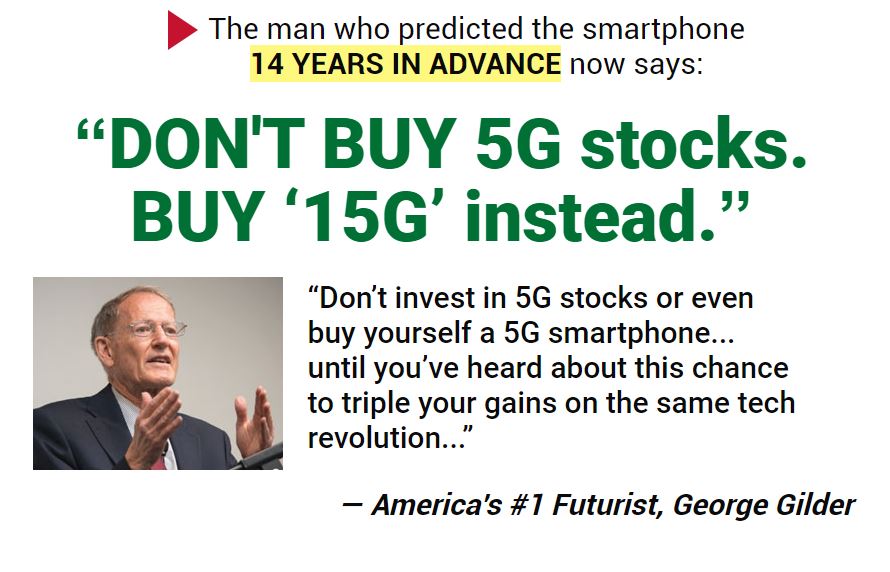 Speaking of which, Gilder is not alone in recommending that we pay attention to 5G, other newsletter editors have had their say about the stocks we should invest in. I have reviewed a couple of presentations on the same, including Fluorescent Sand by Ian King and The 5G Tollbooth Stock by Briton Lyle.

Before we go any further, I should clarify that 15G does not mean that there is a 15th generation of wireless network infrastructure.

George Gilder refers to his recommendations as “15G” because he believes that they will gain thrice the returns that the typical 5G stocks will earn.

By typical, he means the names you see pop up when you type “5G stocks to invest in” on your search engine. This includes companies like Qualcomm, Samsung, Cisco, Ericsson, Apple, Verizon, AT&T, and the other brands you’d associate with 5G.

He wants you to stay away from those stocks because they are relatively big and, therefore, haven’t got much growing to do. They will certainly increase in value due to 5G, but it will be slow and arduous. He says:

“… if you’re only looking at household-name 5G stocks, you’ll miss out. That’s why I’m urging anybody who will listen to look at what I call ’15G’ stocks instead. They come with a little more risk, granted.”

What he has in mind is the smaller companies that will not be directly involved in the buildout but that will benefit from 5G in one way or another. Since they are small, they will grow exponentially when the new network standard is adopted by the masses.

These stocks are off-the-radar and few people know about them.

What are his 15G stock picks?

During the presentation, he doesn’t provide the names of the stocks he wants you to consider, but he offers clues.

They share some common characteristics. For example, their share prices are considerably low, which means that you will be buying them with the hope that they rise in value.

Additionally, they are relevant to the 5G discussion because they solve problems that 5G has been grappling with during its buildout.

The first one is a network company that manufactures small mobile devices that will act as nodes in the network bringing 5G closer to users:

“So we’ll need a lot more nodes and other devices that can extend those signals. And this first company I’ve uncovered does exactly that. Going all the way back to 1996, they’ve been making the internet more mobile and accessible with their proprietary tech, ever since the first “G” cellular network….”

The second one makes sensors that will be integrated with the AI used in self-driving cars (Autonomous car development will be buoyed by the arrival of 5G hence the connection):

“This is a company that makes, among other things, the ‘brains’ for self-driving cars…

… Advanced Driver Assistance… (ADAS) tech is what they call the sensors that can watch blind spots and give collision warnings for both bumpers….

This second “15G” company I want to tell you about — and they’re also completely off-radar for American investors — secretly dominates this AI-powered field.”

The third pick provides AI-enabled cybersecurity solutions. Since 5G will encourage more data transfer over a greater bandwidth, hackers may step up their operations necessitating new security protocols, which the company will provide:

“They’re making incredible strides by merging artificial intelligence and network security. This could erase a huge concern a lot of telecom customers have with 5G…

… They innovate network security. That’s not the new part — lots of companies focus on cybersecurity. What’s new is that this firm’s proprietary security technology uses an AI engine to get smarter as it protects your system.”

The fourth one will provide security for cloud services. Gilder expects us to be more reliant on cloud computing than we already are when 5G comes of age:

“A ’15G’ Company That’s Built a Fortress for the Cloud — Faster networks will mean an explosion in cloud storage — and cloud security… You can now get this one for less than $20. Even though it’s got better profit margins than all five FAANG stocks and the best cloud protection platform online.”

The fifth one is an antenna company that has developed an important RF that can capture the entire spectrum of 5G signals:

“The ’15G’ Firm With the World’s Best Antennas — You’ve heard of Skyworks, Texas Instruments and Qualcomm. But this tiny firm has what they don’t — the world’s first RF antenna for capturing the entire bandwidth of 5G signals. And it does it with half the power draw.”

The final one will help secure IoT networks. IoT, like autonomous vehicles, will also take off when 5G goes mainstream.

“The ’15G’ Company That Safeguards the IoT — Your home could soon have hundreds of devices connected to the insecure internet. This company has the technology to comb those mini-networks nonstop, looking for “glitches” and threats. This is very small player that’s growing extremely fast. And they’ve got piles of cash — up to 40% of their market cap is matched by funds in the bank.”

He wrote a report detailing them. It is called 15G Unleashed and it contains the names and ticker symbols of each of those companies.

Who is George Gilder?

George Gilder is an economist, an author, and an entrepreneur who also edits newsletters. He had taken a break from the industry for a while and is now making a comeback.

He is the chairman of George Gilder Fund Management, LLC. He got into the financial services industry four decades ago.

His approach is to leverage his extensive Rolodex to find investment opportunities that few other people know exist.

He is a published author with his 1981 book Wealth and Poverty the standout title in his library. In it, he explored supply-side economics and made a case for capitalism (a touchy subject during that period due to the Cold War).

It was so well received, President Reagan quoted it from time to time and even gave each member of the cabinet a copy to read. He also gave Mr. Gilder a White House Award for Entrepreneurial Excellence.

He has published 18 other books about the markets and technology.

What is Gilder’s Moonshots?

To get a copy of 15G Unleashed, you have to subscribe to George’s new investment advisory service, Gilder’s Moonshots.

The subscription fee for one year of Gilder’s Moonshots is $2,500 but you can try it for three months for $650.

There is no refund policy. What they have instead is a satisfaction guarantee whereby you will be entitled to an extra year of Gilder’s Moonshots for free if you don’t earn 1,000% in positive returns in your first year after following his recommendations.

When George Gilder talks about 15G, he is not referring to the 15th generation of wireless networks. It is just a marketing tactic to get more people interested in his presentation.

What he is referring to are small, relatively unheard-of companies that will benefit from 5G and yield three times as high returns as typical 5G stocks (3 x 5G). Although they don’t get much publicity, they work in the background creating solutions to the problems that larger, household name companies face as they implement 5G.

Since they are not well known, Gilder thinks that they are undervalued. They are unlike the bigger companies whose 5G developments are priced in almost immediately.

He believes that you will profit more from investing in them because they have room for aggressive growth due to the 5G revolution.

That being said, you should proceed with caution because smaller companies are riskier. They expose you to greater volatility.