Casey Research and its corporate affiliates have been promoting Dave Forest’s EV Superboom Summit for a while now.

It is an event during which Dave will talk about the EV industry and reveal the stocks he thinks will emerge victorious within that industry.

Let’s take a look at what he will be focusing on during the EV Superboom Summit.

What is EV Superboom Summit?

The EV Superboom Summit is an event during which Dave Forest will talk about the Electric Vehicle (EV) industry and the investment opportunities within it.

The subject of Electric Vehicles has dominated the financial newsletter circles for a while now. Guys like Jeff Brown and Ian King have been talking about investing in battery makers, EV part suppliers, and even self-driving stocks. 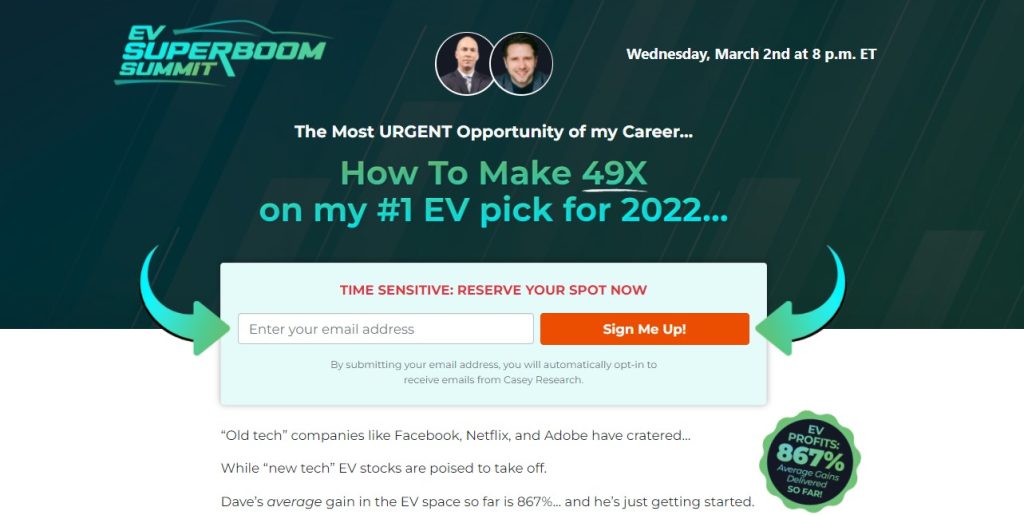 In releasing this event, Dave Forest wants to weigh in on this and he appears to have a few ideas he wants to put across.

First, he acknowledges that “Old tech” companies like Facebook, Netflix, and Adobe have hit a bit of a snag of late.

As this happens, Dave Forest claims that “new tech” EV stocks will be where investors would rather invest because they are likely to take off.

Dave expects the Electric Vehicle market to thrive, a continuation of what has been happening so far because he has seen his EV investments grow 867%.

As he has been promoting the event, he has been writing articles touting the impact Electric Vehicles will have on how we live our lives. He calls it the EV Revolution.

He claims that some of the most notable investors have been going long on EV stocks. He says that these smart investors are refusing to book profits despite early profits and he takes this as a sign that the industry will only get more profitable. 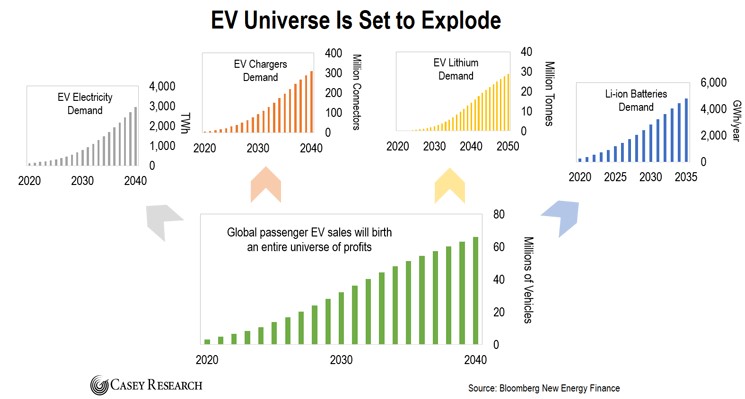 Dave says that the world’s richest individuals are even buying more EV stock and they are not just going for obvious picks like Tesla (TSLA).

All in all, he says that it is a universe of profits and trillions of dollars are flowing into EVs, everywhere in the world.

What will be discussed at the EV Superboom Summit?

Dave is expected to focus on how people can invest in the EV “Superboom.”

He states that the number of electric vehicles on the roads will increase from 10 million to 145 million in the next ten years and this will only create more opportunities to cash in. There will be new subsectors that will thrive from this and you should consider going for them.

Dave Forest will talk about:

Investment gurus have been speculating about project TITAN and we’ve even gone through presentations like Bill Spencer’s Profits From The Apple Car Pitch.

Dave Forest will also talk about a small EV supplier that he thinks you should consider going for. It is a small company that trades at $3 and he says that it will likely go from $30 million to $500 million in sales and hand investors 49X gains.

Dave Forest is an investment newsletter editor who’s been writing about the stock market for years.

He has been part of the editorial team at Casey Research since 2004 when he joined and started editing Casey Energy Speculator. That investment advisory service focused on finding high-potential investment opportunities in oil, natural gas, uranium, and renewables.

Dave Forest was comfortable writing about those topics because he is a geologist by profession and he had worked in the mining and petroleum industry for over 20 years.

During his time working in the mining and petroleum industry, he founded a mineral exploration and development company and raised over $80 million from some of the most well-known resource investors in the country.

Dave also helped develop a 10-million-ounce gold deposit in Colombia and became the first person to be granted a modern exploration license in Myanmar.

Even before he announced that he would be hosting the EV Superboom Summit, Dave Forest was always talking about the Electric Vehicle industry in terms of how big of an impact it will have on our lives.

He expects the EV sector to spurn several sub-sectors just like the automobile did when cars first became popular in the twentieth century. He claims that back then, industries around Tires, repair shops, roadside motels, diners, and hard assets like steel and oil grew into multi-billion dollar juggernauts and the same could happen if Electric Vehicles reach mass adoption.

If you are like most people, the name you associate most with EVs is Tesla, and for good reason. It is the most valuable car manufacturer even surpassing traditional powerhouses like Toyota and Volkswagen although it doesn’t sell anywhere near the number of cars they do.

Dave wants you to look past Tesla and pay attention to other companies that will contribute to the mass adoption of electric cars, pick and shovel stocks if you will. Even his number one recommendation is not a bonafide EV carmaker but it will be instrumental to their production.

That is what we expect from the EV Superboom Summit.