Are you looking for a review of Eric Fry’s most recent presentation about what he refers to as The Secret Behind the Coming 50X Gold Bull Market?

Gold appears to have gotten many analysts excited as it has been on a bull run that has seen it break its previous record price.

And since it also shows signs of keeping that momentum going, when I received an invitation to check out Eric’s presentation, I was keen to see how he was going to justify his prediction of an even bigger surge.

Therefore, in this article, I will walk you through the main points he raised during the pitch.

What is 50X Gold Bull Market? (The Pitch)

Although 2020 has been a year of volatility and unpredictability, it seems like some things won’t be changing as gold, a historically proven store of value has had a very good year (as of writing this). 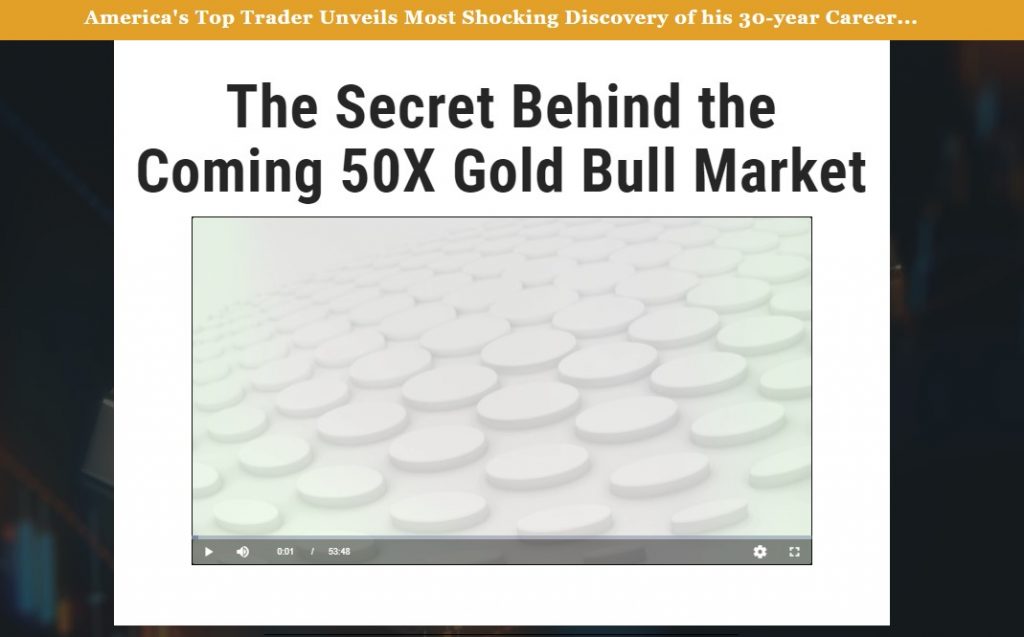 Eric Fry goes as far as saying that you can make a fortune by investing in the precious metal and says that we are likely to witness the biggest gold bull market ever.

Eric is not alone in this as we have recently seen a number of gurus come out with similar messages about gold. Off the top of my head, I can think of presentations I have reviewed here recently like Gold Placements by EB Tucker and The Great Depression of 2020 by Jim Rickards.

Going back to the presentation, this excerpt sums up Eric’s outlook:

“The conditions today remind me of when I forecast a bull market in gold in the early 2000s, before it went on a 400% run…

But as you’re about to see, this new gold bull market will be unlike any other we’ve seen before.

Realistically, I think we could hit $10,000 per ounce in the short term.

After that, I think the numbers could be really off the charts.”

Eric notes that the world’s gold supplies have been dwindling because rich people have been hoarding the precious metal.

And while this has been happening, the government has been spending beyond its means using a debased dollar that keeps losing value relative to gold. He says that since 1971, the dollar has lost up to 95% of its value against gold.

He believes that the racking up of public debt, as has been happening for the past few years, is a concern because it could further erode the value of the dollar. And a weak dollar is good for gold.

The trigger behind the gold bull market

Eric Fry says that the coronavirus pandemic is going to trigger a gold bull market:

“In response to COVID-19, governments around the world are rolling out the largest, most aggressive stimulus and bailout programs in modern history.

TRILLIONS of dollars of government money—much of it printed out of thin air—will be distributed to individuals and businesses during and after the crisis.

The U.S. government just passed the largest economic stimulus package in history, BIGGER than the one in 2008!”

He explains that although that stimulus money is needed, it will cause inflation and the price of gold will go higher.

To prove his point, he says that throughout history, whenever a country prints money to cushion the blow of an economic crisis, the price of gold always goes up. He expects that to happen to the US soon.

In addition to that, he also says that negative interest rates (a realistic prospect during an economic crisis) will also play a part in instigating a gold rush.

“If gold is to make a move to new all-time highs, negative interest rates will likely provide most of the fuel to propel the gold price to $2,000 and beyond.

Today, more than one quarter of the world’s bonds are ‘paying’ a negative yield.

That’s $15 TRILLION worth of negative yields…”

He says that whenever the interest rates fall below 1.5%, the price of gold rises, and when they go above that, the opposite happens.

“And no, it has nothing to do with bullion, coins, ETFs, mining stocks, or any other type of investment you’ve likely heard about before.”

He says that he has one recommendation that could net 1,000% in positive returns. He says that it is arguably the safest yet most profitable investment.

So, what investment is he talking about?

He is referring to Royalty Rights on gold mines and he says that you can buy and sell them on public stock exchanges, just like stocks.

He insists that they do better than other avenues during gold bull markets while providing you with a level of security that you just don’t find with the other forms of investment. The important thing is to buy them while they are still small and unknown.

Eric has found one royalty investment that he thinks will do well. It belongs to a small company that is currently trading for just $5 but that he says could make you 50 times your money if the gold bull market materializes.

Unfortunately, he doesn’t divulge more details about it, or at least enough for us to identify it. Therefore, I won’t be revealing its name as I have done in the past with other teasers.

Eric has written a report called Three Ways to Play the 50X Gold Bull that has the name of that company as well as two other opportunities that he says you should take advantage of.

Who is Eric Fry?

Eric Fry is an investment newsletter editor at InvestorPlace.

He has been in the financial services industry for the past 25 years. During that time, he has been showing investors how to profit from the biggest economic shifts. For example, he claims to have urged his subscribers to get in on gold before its bull run in the early 2000s.

He also says that he predicted the financial crisis of 2008, telling his followers to short big banks and mortgage companies that eventually went bust.

These examples demonstrate that he is good at identifying big trends and opportunities in places where most analysts overlook.

What is Fry’s Investment Report? (The Newsletter)

To receive a free copy of Three Ways to Play the 50X Gold Bull, you have to subscribe to Fry’s Investment Report.

I did a comprehensive review of Fry’s Investment Report that you can read to understand how he picks his trades. However, I will provide you with a brief description here for the sake of this review.

Here is how Eric describes it in the presentation:

“This is my monthly research advisory in which I take you behind the scenes to show you where the world’s next big investing trends will be.

Like I said before, the REALLY BIG money is made by catching just one or two big trends…and riding them to what are often million-dollar gains.

I call these opportunities Power Trends.”

Therefore, if you subscribe to this newsletter, you will be receiving recommendations on how to take advantage of big market trends.

In a nutshell, here is what you get when you sign up for the newsletter:

How much will you pay to join Fry’s Investment Report?

Eric will let you pay $49 for an annual subscription (basic membership) although the usual price is $199.

Are there refunds when you cancel your subscription?

If you cancel your subscription within the first 90 days of joining, you are entitled to a full refund of the subscription fee.

“The Secret Behind the Coming 50X Gold Bull Market” is the heading of a teaser by Eric Fry where he talks of there being an upcoming gold bull market. He believes that it will be triggered by a falling US dollar – which will witness downward pressure caused by inflation (soaring public debt due to the stimulus packages) and negative interest rates.

He expects investors to turn to gold to hedge their portfolios against the weakened dollar thus leading to an increase in the price of gold.

He says that the best way for investors to take advantage of the bull run will be to invest in gold royalties because they have the potential to generate returns with minimal risk. He has identified at least three ways to profit from the market but the only way you can learn what these are is by subscribing to his $49/yr (90-day money-back guarantee) newsletter, Fry’s Investment Report.

The crux of the newsletter is to identify major market trends and ride them to massive profits. To learn more about it, you should read my full review.