Although Eric Fry and Louis Navellier are not known to co-host live events, they will be coming together to bring us the Technochasm Summit.

Hot on the heels of the success of his “technochasm” video, Eric brought in Mr. Navellier to discuss ways in which people can make money in the technology industry by profiting from the phenomenon.

In this brief article, I will outline what you should expect from the event as well as provide details of how you can attend.

What is the Technochasm Summit?

The Technochasm Summit is an event that will be hosted by Eric Fry and Louis Navellier on November 19 at 7 PM.

It will be free to attend for anyone who registers for it in time – you don’t even have to be a member of a newsletter offered by InvestorPlace. 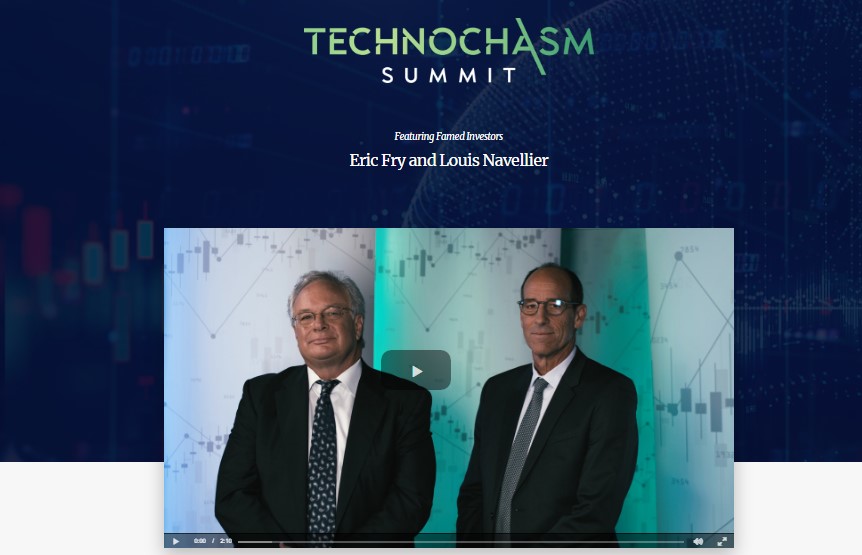 This webinar is a follow-up to a viral video titled “Technochasm” that Eric Fry published in February 2020 that got more than 11 million hits.

In that video, he introduced the concept to refer to the division between the wealthy and the poor on personal, business, and investment levels. He highlighted the approaches that the poor can take to bridge it.

When you attend the event, they will send you a soft copy of a book called Silicon Valley Super Cycle that talks about investing in the tech industry. To be precise, it reveals the life cycle of every new startup or new technological development.

You can register for the service by providing your email address and phone number on the landing page.

In doing so, you will become a “VIP” and this will mean that you will be agreeing to receive complimentary text message reminders leading up to the event

Who are Eric Fry and Louis Navellier?

Eric Fry and Louis Navellier are both members of the editorial team at InvestorPlace, the publishing firm that will host the summit.

Eric is a former portfolio manager who specialized in international equities.

After his successful stint as a professional portfolio manager, he joined James Grant’s publication as the editor of Grant’s Interest Rate Observer. He also worked on the production of Grant’s International and Apogee Research, a research product targeting professional money managers.

Eric Fry is known for his bold predictions that he usually backs up by taking action. For example, he shorted tech stocks in 2000 and 2001 to take advantage of the contraction that took place in the industry. He also predicted in 2005 that the housing boom would end and drive Fannie Mae and Freddie Mac into bankruptcy.

Eric is also known for his presentations, some of which I have featured here before; like a recent one about a 50X Gold Bull Market.

Louis Navellier is a well-known growth investor who’s been actively providing investors with investment advice for more than three decades.

He has made a name for himself in the investment circles as the analyst who provides his followers with simple but powerful tools to beat the market.

He runs a few publications, including Breakthrough Stocks and Growth Investor (which are published by InvestorPlace).

Louis claims to have beaten the S&P 500 by significant margins over the past 17 years. For example, the model portfolio of Breakthrough Stocks has beaten the benchmark by a margin of 6-to-1 and that of Growth Investor has outperformed the market by a margin of 3-to-1 in that period.

Louis Navellier has released presentations in the past touting his investment strategy and stock picks. I have reviewed a couple, including The Moneyball Multiplier Challenge and Trump’s 5G Lockdown.

What they will discuss during the Technochasm Summit

As mentioned, the Technochasm Summit is a follow-up to a viral video that Eric Fry published in February that introduced us to the concept of the “technochasm.”

During the summit, he and Louis Navellier will delve more into the concept:

And why some companies are growing faster than ever before, while others are going bankrupt in the blink of an eye.”

They even refer to it as a financial event that could provide you with the opportunity to land a massive personal windfall.

They will discuss the biggest winners and losers of the technochasm and also talk about how investing in the big winners will “turn a string of a few small investments into $100,000 or more over the next 12 months.”

They will reveal their #1 stock to own – a small company that may be a big winner as the technochasm phenomenon plays out.

Closing Remarks on the Technochasm Summit

In one of the “updates” leading up to the Technochasm Summit, Eric Fry mentions that technology is “the engine that drives our economy and the stock market.” He claims that it is the key to the biggest investment opportunity in the world.

He doesn’t divulge more information about it but it is enough to know that he intends to talk about investment opportunities in the technology sector. The “technochasm” is the event that will trigger those opportunities and he will make proposals on how to take advantage of them.

I have attended a few summits in the past and from my experiences attending them, you can expect Eric Fry and Louis Navellier to advertise one or more newsletters during the event.