Have you encountered a presentation by Nick Giambruno (Casey Research) titled “Endgame 2020”?

The bizarre-sounding header sets the tone, and I quote:

“During the lockdown, America’s financial elite secretly launched the biggest attack on your wealth since 1971. If you have more than $5,000 in the bank, YOU MUST ACT NOW, before it’s too late…”

Nick claims that your savings and retirement accounts are in danger due to a financial change that is being pushed by “the elite.”

In this article, I will walk you through the main issues Nick raised in the presentation to help you understand what he means and determine whether you should be concerned.

Although this presentation is an ad for Casey Report, Nick Giambruno raises some interesting, if not controversial, points about the financial system. 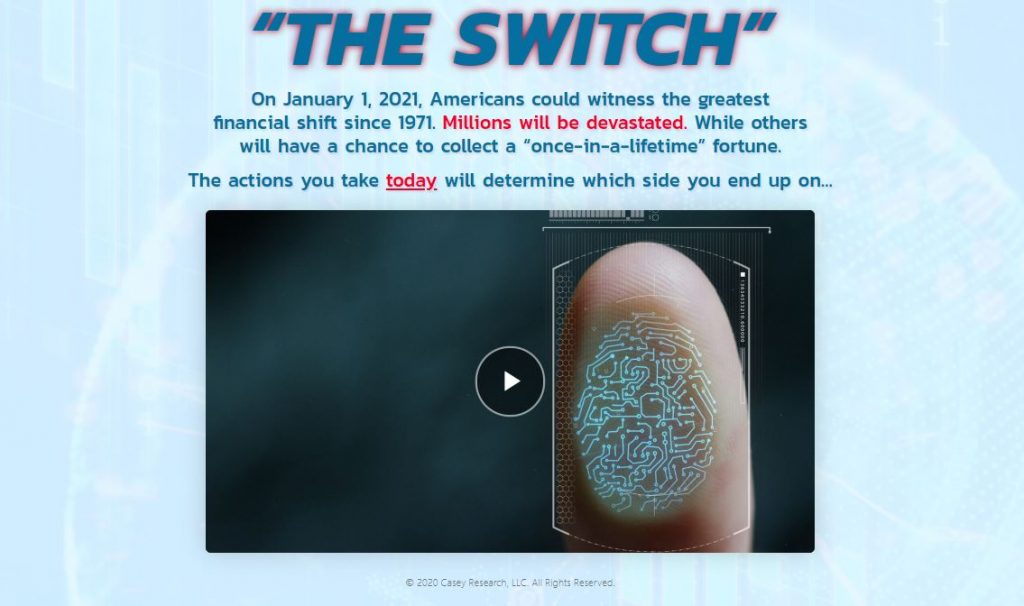 He talks of a financial event that is being plotted by the elite. It will erode savings and retirement accounts unless you follow his instructions. As he says in the presentation:

“…you could wake up to find your savings and retirement accounts have lost much of their value – practically overnight.”

But he claims that the similar events to the upcoming financial shock have happened before:

The first one was during the Panic of 1907 when wealthy bankers helped pass The Federal Reserve Act that established the Fed. He says:

“Back in 1907, for example… There was a major financial panic. That’s when powerful bankers — led by J.P. Morgan — came together to quote-unquote ‘save the financial system.’

…On his deathbed in 1919, President Woodrow Wilson expressed deep regret for his role in the creation of the Federal Reserve.”

The second one was the passing of the Emergency Banking Act of 1933.

… the government forced Americans to turn in their gold savings. The Federal Reserve Bank in New York snatched more than $30 million – worth almost $600 million in today’s dollars – in just one fateful day.”

When President Roosevelt instituted order Executive Order 6102, people handed in their gold coins for $20.67 per ounce, the government changed the price to $35 per ounce.

The third one was in the 1970s when President Nixon decoupled the dollar from gold:

Consequently, the dollar has lost value due to inflation.

Giambruno cites all those events because he expects a similar pattern when the new changes take effect.

Now, Nick believes that the elite are hatching a plan to alter the financial system.

His first piece of evidence is the draft of a bill presented by Speaker Nancy Pelosi concerning the government’s response to the pandemic.

According to him, the suspicious thing about the draft was as he puts it:

The new “digital dollar” was created to pay citizens their stimulus packages. Then he also highlights a new Senate bill that is almost similar to Speaker Pelosi’s bill claiming that it will cement the changes.

The second piece of evidence is a new patent filed by Microsoft for a chip that will enforce a government-backed cryptocurrency system that uses body activity data. Here is how he describes it:

“Microsoft has invented an embedded chip that can sense a person’s movement, body temperature, heart rate, eye activity, blood flow — even our brain waves — in order to track all our body’s activity and transmit a digital currency wirelessly.”

He mentions that Visa has also launched its electronic currency system and part of its patent indicates that physical currency will be destroyed, confirming his assertions.

Giambruno claims that Bill Gates has also allied with big American companies and powerful organizations to form The “Better than Cash” Alliance. He goes on to say:

“Bill Gates is using his vast wealth and power to help ban cash and implement a digital U.S. dollar. As soon as possible!”

The final piece of evidence is ID2020, which was launched by GAVI, a company formed by the Bill and Melinda Gates Foundation, Rockefeller Foundation, and Microsoft. Nick says that ID2020 was meant to collect personal information on a large scale.

He cites examples of businesses refusing to accept cash (due to the pandemic) as further justification for his hypothesis.

All said and done, he says that the Fed has set January 1st, 2021 as the date when it will begin officially rolling out the new digital dollar, replacing cash.

What is the solution?

Nick has written a report that recommends that you buy a “crisis currency” that will be even more reliable than precious metals, which have been the default store of value for millennia. Here is how he describes the move:

“If you hope to emerge from this financial shock intact, you’ll need to consider buying an asset I expect will soon surpass precious metals as the “hardest money” the world has ever known…”

He describes it as not just a store of value because he expects it to hand you gains:

“This asset has the potential to hand you enormous gains of 1,000% (or more) over the next few years.”

He has written a report about it titled The New “Crisis Currency”: Why Every American Should Own at Least $100 of the Hardest Money the World Has Ever Known.

From that description, I think he is talking about investing in cryptocurrency. I think so because he rules out stocks, bonds, options, precious metals, and commodities. Furthermore, a cryptocurrency can increase in value.

Nick Giambruno is a senior analyst at Casey Research. He edits the Casey Report.

He has been traveling the world and meeting with some of the most influential people in the world of finance. People like a former congressman, Dr. Ron Paul, well-known investor Jim Rodgers, and his mentor and founder of Casey Research, Doug Casey.

From his encounters with them, he has learned that the best investment opportunities appear when there is drastic change – which explains the theme of the presentation.

What is the Casey Report?

To get your hands on that report, you have to subscribe to Casey Report for $49 (down from $199).

In addition to that report, you receive monthly investment recommendations and two other reports for free.

The first one is called The Ultimate Privacy Guide: The Secrets Big Government and Big Tech Hope You Never Discover.

In it, he reveals how you can protect your information from the government and big companies like Google and Facebook.

The second one is The Biggest Gold Mania in History: 3 Opportunities to Capture Massive Gains.

In it, he explains why Gold will rise after the financial change and shows you three ways you can invest in it.

He is very distrustful of the Fed and the wealthy elite who he says are trying to end cash as a form of currency to substitute it with a new “digital currency.” With the currency, the government will collect more information about citizens thus infringing on privacy.

He then compares this with historical events that have previously altered the financial system and he concludes that the new changes will be bad because they will erode savings and retirement accounts.

Then he paints a dystopian picture where the government will use your personal information to control your actions, deduct taxes directly from your accounts, and even ban you from your account if you go against certain “rules.”

He says that the legislative arm has set everything in motion leaving investors with little else to do than protect themselves. His solution: stocking up on “crisis currency.”

From the presentation, it is clear that Nick is talking about buying cryptocurrencies. How he presents it, though, is a bit over the top.