The Empire SPAC Investor is an investment advisory service being offered by Empire Financial Research.

You have probably encountered it in a pitch or in one of the emails they send and are having trouble deciding whether or not it will be worthwhile.

If you are undecided about it, I wrote this article to give you an overview of the investment strategy that Enrique and his team use as well as outline the benefits you get when you sign up for it. Hopefully, you will be better informed after reading this.

What is Empire SPAC Investor?

Empire SPAC Investor is an investment advisory service that is published by Empire Financial Research. It is edited by Enrique Abeyta. 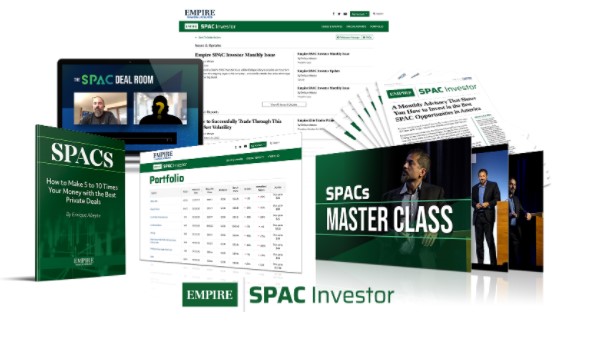 On the Empire Financial Research website, they describe it as follows:

Each month, editor Enrique Abeyta sends subscribers his favorite investing idea in the SPAC universe. He believes that a diversified portfolio only needs 10 to 15 stocks, so he’s ruthlessly selective when making recommendations, focusing only on his absolute best ideas with the potential for multibagger returns.”

The main feature of this advisory service is a monthly newsletter that Enrique publishes every second Wednesday of the month.

Here are the other features of the newsletter:

To understand how the service works, you need to get the gist of how SPACs work.

What are Special Purpose Acquisition Companies and how do they work?

SPAC is an acronym for Special Purpose Acquisition Company.

As the name suggests, it is a company that can turn a private company public without having to go through the regular IPO process.

Investopedia defines a SPAC as a company that has no commercial operations that is formed to raise money through an IPO with the intent of acquiring an existing company (the startup). SPACs are also known as “blank check companies.”

It is a loophole for startups that don’t want to jump through hoops to go public (given how hectic IPOs can be).

In the past few weeks, private companies that are about to go public have been getting a lot of attention. A few investment gurus have even endeavored to show their followers how to make the most of those opportunities. A few recent examples include Teeka Tiwari’s Freedom 2021 and Jeff Brown’s Pre-IPO Code.

Unsurprisingly, SPACs have been getting more popular because they offer an alternative route to private companies to go public.

As a retail investor, one advantage of investing in SPACs is that you don’t have to worry about being accredited or non-accredited – although the JOBS Act that President Obama signed into law in 2012 now gives non-accredited investors access to startups.

You also get to purchase shares of private companies that you’d otherwise have no access to. The best startups are usually out of reach for everyday folks.

Who is Enrique Abeyta?

Enrique Abeyta is a money manager, an investment analyst, and an editor of financial newsletters. He is on the editorial team at Empire Financial Research where he edits Empire Elite Trader, Empire SPAC Investor, and Empire Elite Growth.

While he was schooling at the Wharton School of Business, he was one of the early founders of the Wharton Fellows Fund – it is an endowment investment fund that is run by students. He also went to the University of Pennsylvania.

Abeyta claims to have had such an impressive track record that he outperformed the S&P 500 for ten years. He also asserts that he made money during the bear markets in the aftermaths of both the Dot Com Bubble and The Global Financial Crisis.

What you get when you join Empire SPAC Investor

When you subscribe to Enrique Abeyta’s Empire SPAC investor, you receive:

You also gain access to all of Enrique’s special reports for free.

How much do you pay to join Empire SPAC Investor?

No, it doesn’t offer refunds if you decide to cancel your subscription.

What they have instead is a 30-day 100% Satisfaction Guarantee policy. This means that if you cancel your subscription within 30 days, you receive the credit that you can then use to subscribe to any other service offered by Empire Financial Research.

Enrique Abeyta started Empire SPAC Investor to help retail investors navigate the SPAC market. It enables them to leverage his experience to find the best SPACs.

There appear to be many private companies that are bound to go public this year and investing in SPACs is one way of getting in on them.

Before you sign up for it, remember that the Empire SPAC Investor encourages long-term investments typically lasting anywhere from a few years to a decade.