Empire Financial’s Wealth Accelerator is a new presentation that has been getting a lot of attention.

With a panel comprising two legendary investors – Whitney Tilson and Berna Barshay – they talk about a hidden corner of the stock market that could potentially supercharge your portfolio and earn you large payouts.

In this review, we take a closer look at the presentation as I highlight the key talking points of the discussion.

What is Empire Financial’s Wealth Accelerator? (The Pitch)

Wealth Accelerator is a webinar presented by Empire Financial Research. It was hosted by Jared Kelly and featured Whitney Tilson and Berna Barshay. 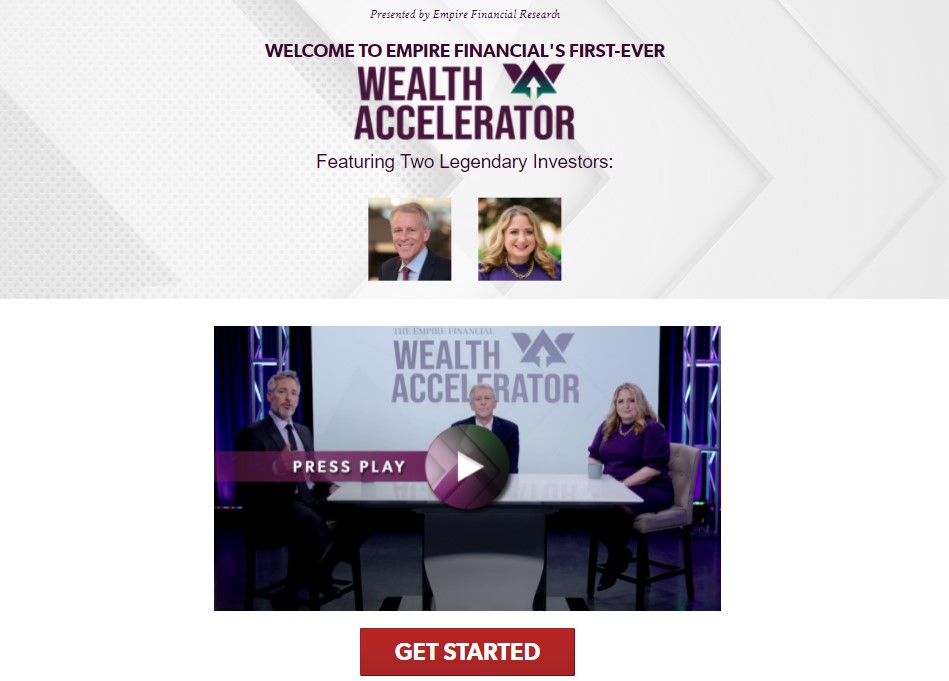 In the introduction, Jared Kelly says that the discussion centers on a new approach to investment that can generate huge gains without having to deal with certain financial instruments. To quote him,

“What you’re about to see today has nothing to do with options, cryptos, or any other complicated investment strategies.

And the risk here is minimal.

In fact, you could start taking advantage of the information we’re about to show you with just a few hundred dollars.”

When Berna Barshay is introduced, it becomes pretty clear that they want to talk about investing from a woman’s perspective.

They mention that women in the world of investing perform better than men and to be fair, a study found that female analysts were more accurate and were more likely to make bolder calls. That being said, I should point out that the researchers noted that this could be attributed to the fact that only women with above-average abilities choose to be analysts and that brings their overall mean performance up.

That perception aside, Berna says that as a woman, she has a better feel for some sectors than her male counterparts especially if women are the drivers of consumption. She says,

“I maintain that finding the instinct within you to predict which companies will hit their mark with female consumers is much easier to do if you are actually a woman.

You need to have the skills to do the financial analysis, and comb through company filings and press releases. You need to be trained in competitive and industry analysis. And these are skills sets equally available to both men and women.

But to have the gut instinct of knowing what women really look for when making purchasing decisions? It’s just infinitely easier to see through promotional corporate marketing mumbo jumbo as well as identify the new products that will truly resonate with women… if you’re a woman!”

And given her background in finance, she has an edge. She continues,

Nothing is ever 100% – I do know a handful of male investors who are spectacular at picking stocks of companies that cater to women but there are still many, many brands out there that men tend to overlook because women are the ones that know the companies and buy their products.

To demonstrate how this works with a real-life example, she talks about a company called L Brands (LB).

“L Brands is one of them.

I’m willing to bet most of our viewers don’t own stock in the company.

Maybe they’ve never even heard of it.

But L Brands is huge.

Its flagship brands – which will probably be familiar to anyone who has ever been to a mall – include Victoria’s Secret lingerie and Bath & Body Works, which sells home and personal fragrances.

Last May, shares were trading for $15.

Almost a year later, they trade for more than $64.”

And here is a stock chart comparing its performance with Apple’s and Microsoft’s. 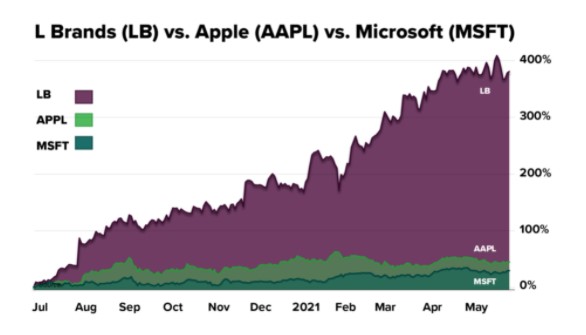 Berna Barshay points out that Microsoft and Apple typically have 27 and 52 times more trading volume than L Brands respectively showing that although it was less traded, it outperformed them.

In addition to L Brands, she says that her qualitative approach also led her to uncover companies like Nordstrom, Peloton, Fiverr, The Children’s Place, and Revolve.

The endgame of the presentation is to get new members to join a newsletter being launched by Empire Financial Research called Empire Market Insider.

Who are the Experts behind Empire Financial’s Wealth Accelerator?

He graduated from Harvard College with a bachelor’s in government in 1989 and after college, he spent two years as a consultant at Boston Consulting Group. He earned an MBA from Harvard Business School where he was named a Baker Scholar.

He has written (including co-writing) four books mainly about investing. They are The Art of Playing Defense: How to Get Ahead by Not Falling Behind, The Art of Value Investing: How the World’s Best Investors Beat the Market (2013), and More Mortgage Meltdown: 6 Ways to Profit in These Bad Times (2009). He co-wrote the last two. He was also a contributor to Charlie Munger’s (Vice-Chair of Berkshire Hathaway) book, Poor Charlie’s Almanack: The Wit and Wisdom of Charles T. Munger (2005).

He has been invited to speak at Google, has featured on the cover of Kiplinger’s, and has twice appeared on 60 Minutes

Berna Barshay graduated from Princeton in 1992 and earned an MBA from Harvard Business School in 1997. After graduating, she spent 20 years on Wall Street.

Berna Barshay has experience as a buy-side analyst at several long/short hedge funds where she mainly covered media, consumer and technology, and internet stocks. Hedge funds she was involved with include Buckingham Capital, Metropolitan Capital, LaGrange Capital, and Sky Zone Capital.

Her work has been featured by Fortune, Barron’s, Seeking Alpha, and The New York Post.

The whole point of hosting the Wealth Accelerator event was to promote the newly-launched Empire Market Insider newsletter. It is a new financial research service that will be headed up by Berna Barshay. 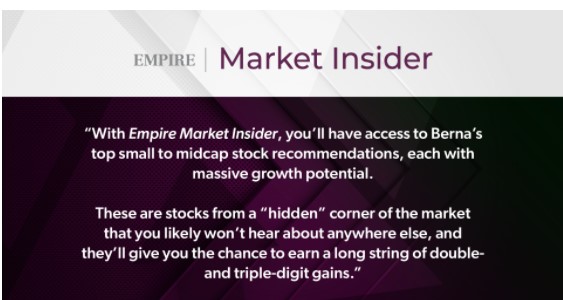 Berna claims that she is tied to a wide variety of market sectors and has made winning calls on every type of stock, from mining stocks to consumer goods manufacturers and everything in between.

Therefore, she wants to write about these stocks that have often been overlooked in the “hidden” sectors of the market. She also believes that a woman’s perspective will make it unique because it will give male investors an insight into some companies they tend to overlook.

Here is everything you get when you sign up for Empire Market Insider:

Every month, you get an issue of the Empire Market Insider and it comes with market information, stock advice, and clear trading instructions. Berna Barshay also shares her view of the market, the trends she is monitoring, and what her plans for the future are. These monthly issues also give you access to her small- to mid-cap stock ideas.

Berna’s brand-new report: “Three Stocks to Own for the Roaring ’20s Redux.”

In this report, Berna Barshay reveals her three favorite stocks at the time of releasing the presentation. 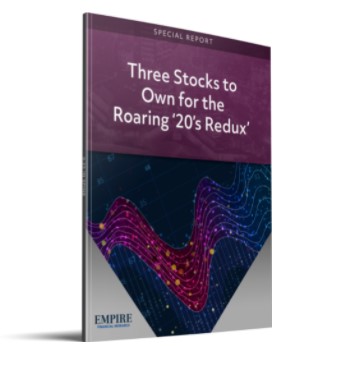 Berna believes that each of them has the potential to pay out tremendous returns in months. In the report, she explains why she thinks 2021 could be a profitable year.

It is an in-depth report that you should read when you become a member of the Empire Market Insider because it explains how Berna operates, how she finds her investment opportunities and her personal experiences from the world of professional investing. She gives you a peek inside the mind of an investor who’s spent many hours in closed-door investor meetings and worked for some big hedge funds for 25 years.

With access to this encrypted website, you can easily navigate through all of Berna’s special reports, videos, stock alerts, monthly updates, and model portfolio.

You have access to college-educated, US-based customer reps that answer any question you have about your subscription. The phone number by which you can reach them (as I was writing this) is 1-800-917-6714.

The publisher says that every subscriber who joins through the link provided at the end of the presentation will get a 60% discount and pay $1,900 rather than $5,000. 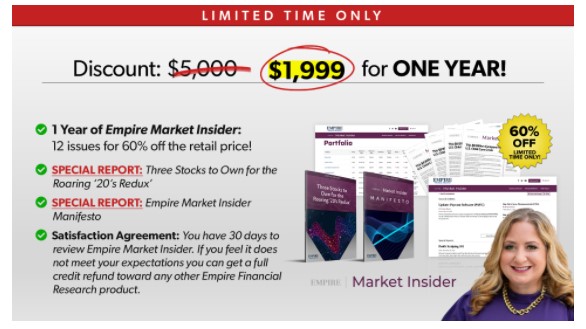 I should mention that this price is subject to change any time; therefore, ensure that you go through the sales page before you subscribe.

There are no cash refunds, unfortunately. 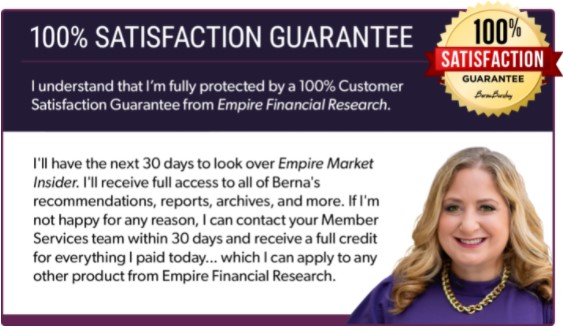 However, they have a 30-day “100% satisfaction guarantee” whereby they give you 30 days to try out the newsletter. If within the first 30 days of signing up you want to cancel your subscription, they give you full credit for everything you paid so you can apply it to any other product from Empire Financial Research.

I think it is legit because although it is a new newsletter and we haven’t seen how it will perform, it is published by a legit investment research firm and run by analysts who have years of experience as investors or money managers. Berna Barshay has also been proving insightful when she has written for Empire Financial Daily.

The argument for bringing in Berna Barshay and have her run an investment advisory service was to diversify Empire Financial Research and allow investors to access stocks that they typically wouldn’t consider.

This particularly applies to companies where a woman’s perspective can be useful. There are sectors where women control the vast majority of consumer spending and in those areas of the market where they have exposure to tons of different products, they are more knowledgeable than their male counterparts. Therefore, when qualitatively analyzing the investment opportunities in them, they are better equipped for that.

Empire Financial Research hopes to tap into that and get people to sign up for the new advisory service.