Another day, another presentation about something Elon Musk is working on that could earn you a lot of money as an investor.

This time it’s from Jeff Brown and he is talking about a new project that “could even put up to an extra $30,000 in your pocket every year.” It has to do with something he refers to as S.A.V.

If you are wondering what Jeff is referring to, keep reading because, in this article, I reveal what SAV means and what it has to do with investing and that $30,000 figure.

Before we get started…

This made me 6-figures in the last 3 months:

What is Elon Musk’s SAV Project?

If you are unfamiliar with Elon Musk, he is an engineer, entrepreneur, and innovator. Although most people know him for his exploits at Tesla, SpaceX, and PayPal, he is always working on other projects and it’s not surprising that he is closely followed by tech enthusiasts and investors alike. 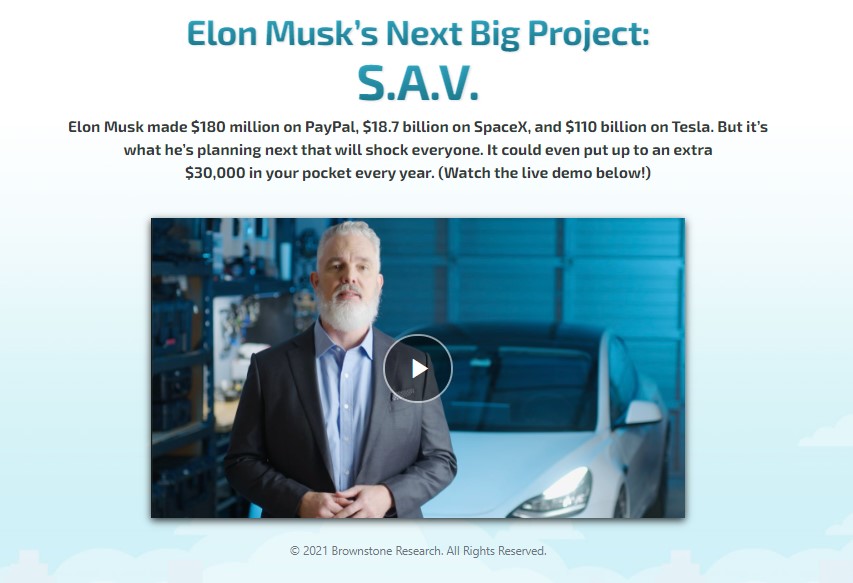 What Jeff is referring to in his presentation as S.A.V has to do with Tesla. He spends a good chunk of the runtime talking about how electric vehicles are going to outrank gasoline-powered ones as the go-to vehicles not just for environmental conservation reasons but also for economic reasons – electric vehicles will be cheaper.

It stands for Shared Autonomous Vehicle.

To give us some background, Jeff tells us that Tesla (TSLA) is not just a car manufacturer. He says that it is also an Artificial Intelligence company and that it works on the software first and builds the car after:

“But before we get to that, let me explain why Tesla is an artificial intelligence (AI) company.

You see, every other carmaker buys or builds an engine and a chassis…

Then they fill in the rest of the details…

And only then, they write software to assist in controlling the car.

Tesla does the opposite.

It designed its software first…

Then it built a car around it.

Jeff is not making things up because Tesla made headlines in 2019 when it released a viral video demonstrating its self-driving capabilities, which were testament to its progress on the self-driving front.

The argument that it is more than just a carmaker has even been used by some analysts to explain why its recent success in the stock market is justified.

Going back to the shared autonomous vehicle phenomenon, Jeff tells us that Tesla plans to build its autonomous driving capabilities to the extent that their cars will provide Transport as a Service; and that’s where the $30,000 comes in. Here is how he explains this:

You arrive at work in your Tesla…

Get out of the car, then press a button on an app on your phone that instructs your Tesla to ‘join the fleet.’

While you’re at work, your Tesla is out driving itself… giving rides, earning money… and returns back to your office at the end of your workday.

Imagine that… your car becomes an asset, literally generating income for you every day.

And that’s exactly what Elon Musk is planning for Tesla.

But once that car is part of the robotaxi network, it could generate about $30,000 in gross profit per year:”

He sees transport as a service catching on and he wants you to take advantage of it.

How to invest in Elon Musk’s SAV Project

Ideally, Jeff would advise his readers to invest in Tesla; but he wants you to invest in a smaller company that is supplying Tesla instead. He reasons that since the supplier’s share price is lower, it has a greater upside potential than the carmaker.

Why is he fixated on this supplier? These excerpts from the presentation of him describing it answer that:

“You see, these Tesla cars have a camera mounted behind the windshield.

It’s that camera that provides visibility in front of the car. It captures front images over up to 250 meters.

And those cameras use this image sensor I’m holding in my hand.

Like I said before, normally Tesla is very secretive about its suppliers.

Good luck finding that information on their website or even on their SEC filings.

But after countless hours of research…

I found the company that’s making these sensors for Tesla.”

So what more does he reveal about the company?

“While shares of Tesla are trading above $700…

The company behind this tech is trading for a price that’s 95% cheaper.

So that means there’s a lot of upside potential.”

That means that it was trading at around $35 when Jeff released his pitch.

“Fortune magazine even named it one of the fastest growing companies in America.

You see aside from this sensor that’s used in Tesla…

This company makes more than 10,000 other car products, mainly semiconductors…

Including power semiconductors that help bring the cost of batteries down.”

And it also supplies other carmakers:

So as all the automakers continue to shift to EV, this company stands to make a fortune.”

Those clues rule out Samsung, which supplied the CMOS Image Sensors (CIS) to Tesla in 2018 – because it is a tech giant.

Although I may be off target with this one, he could be talking about TE Connectivity LTD (NYSE: TEL), a Swiss manufacturer of sensors and other electronic components.

It doesn’t match the stock price he alludes to ($35) but it manufactures an array of products including sensors that regulate the flow of current in batteries. It has been on Fortune’s list of the World’s Most Admired Companies for three years in a row.

To find out the exact company he is talking about, you need to read a special report he’s written called How to Make a Fortune From Tesla’s Secret Supplier in which he has put all the details regarding the company, including its name and ticker symbol. To get the report for free, you must subscribe to The Near Future Report.

Jeff Brown is a tech investment analyst and the founder of Brownstone Research.

He has degrees and certificates from Purdue University, the London Business School, UC Berkeley School of Law, Stanford, Yale School of Management, and MIT.

He is no stranger to technology; he has held senior-level roles at some big tech companies. For example, he was an executive at Qualcomm and a vice president of NXP Semiconductors Japan. He is an angel investor who’s made numerous deals involving private companies and earned gains as high as 4,300%.

Owing to his experience, he has consulted with senior government officials of the Department of Commerce, members of the National Institute of Standards and Technology, and The Defense Intelligence Agency.

The Near Future Report is an investment research service where Jeff publishes his investment ideas each month. To distinguish it from his other premium offerings, he says that he focuses on technologies that are moving faster than people anticipate.

When you become a member of the Near Future Report, you are entitled to:

One year of the Near Future Report costs $49.

Yes, it has. You have 60 days to test the service and if it doesn’t work for you, you will receive a full refund if you cancel.

Elon Musk’s Next Big Project (SAV) is a presentation by Jeff in which he reveals a plan by Tesla to create a fleet of autonomous cars that will provide transport as a service. He suggests that when you own a Tesla, you will have the option to let it “join the fleet” and make you money as a self-driving taxi.

In the presentation, he says that he is targeting a company that makes the sensors used in autonomous cars as one way to invest in this phenomenon. He sees this as an opportunity to get in on the trend cheaply before it goes mainstream.

I couldn’t accurately determine the name of the company he is teasing although I named TE Connectivity LTD as a possible contender. This comes as no surprise because Tesla is quite secretive about its suppliers. It wouldn’t want competitors or malicious players to buy out necessary parts or acquire vital information.

About the Shared Autonomous Vehicle (SAV) project, I will put it out there that many experts agree that we are not close to having fully autonomous cars. Some think we are decades away while some think it may take at least ten years. However, that is not definitive and experts have been proven wrong before – bad comparison here but think of how inconceivable it was for vaccines to be developed in months!

Do more research into this before you commit to investing.