The title that read “What Elon Musk Revealed in Private Will Change Our Country Forever” was catchy, to say the least, and implied that Ray was in on something that requires urgent attention that has to do with the charismatic Tesla CEO. Musk is a trendsetter in many ways and it is hard to ignore anything that is associated with him, so this caught my attention.

I sat through the presentation and decided to write this article to give you a quick summary of what Ray discussed as well as what he was offering and proposing. Give it a read to learn more.

What is Elon Musk’s Hypernet? (The Pitch)

He also discusses the StarLink project that is one of the hallmarks of Elon Musk’s space exploration company, SpaceX. 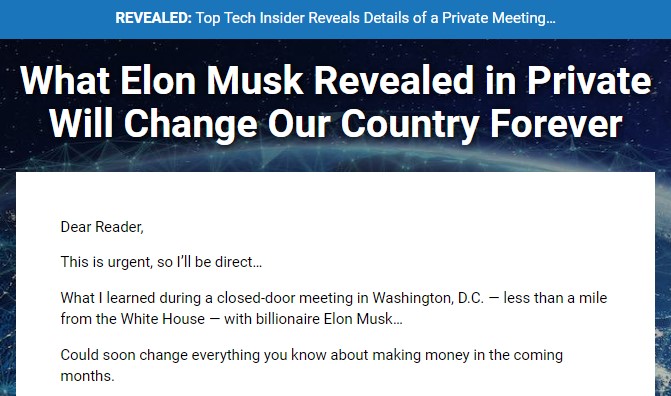 He starts things off by telling us that he learned about the project from a closed-door meeting in Washington D.C:

“What I learned during a closed-door meeting in Washington, D.C. — less than a mile from the White House — with billionaire Elon Musk…

Could soon change everything you know about making money in the coming months.

This meeting was never reported on by the press…”

He calls it the “next trillion-dollar breakthrough” and believes that it could have a far bigger impact on the world than any other technology we’ve seen before.

The breakthrough he is talking about is the project that SpaceX is working on to launch Low Earth Orbiting (LEO) satellites that will provide users with high-speed internet. If you’d like to learn how it works in detail, this video does a better job explaining it. Here, I’ll just give you a quick summary of how it works:

SpaceX intends to launch a constellation of LEO satellites that will beam the internet directly to users’ devices. The constellation will attempt to cover the entire planet and provide reliable internet to everybody. This explains why Ray says:

“In short, Elon’s next big company (one very few people know about yet) may be just days away from revealing an entirely new era of modern internet…

One that will deliver high-speed internet to everyone worldwide…

It also explains why he is saying that it will replace the internet as we know it and decimate broadband internet companies and other internet service providers. He mentions companies like Comcast, Verizon, AT&T, T-Mobile, and Sprint and implies that they will be put out of business by the faster and cheaper satellite internet.

He even goes as far as saying that 5G won’t be able to compete against the “hypernet” because this new internet doesn’t require cell towers – which is one of the challenges facing the rollout of millimeter-wave 5G – and it is better, faster, and safer.

He says that the beta mode will be launched in March:

“According to the technology insider blog Vividcomm, the rollout of a public trial beta mode of the ‘Hypernet’ kicks off on March 31.”

This is probably an attempt to instill a bit of urgency in his readers to follow his advice and invest as soon as they can.

Before we go further, I should mention that Elon Musk’s SpaceX is not the only company working on a constellation of LEO internet satellites. Facebook, Amazon, and OneWeb are also working on similar projects.

Ray himself has released pitches like Apple-Fi and Apple’s Greatest Breakthrough Yet where he proposed that Apple was working on a similar satellite internet project.

The hidden company that will help launch Elon Musk’s Hypernet

Blanco doesn’t want you to invest directly in SpaceX – which is still a private company – because he has found an alternative “hidden company” that will be part of the launch. Here is how he describes it:

And if I’m right about what this means, this rumored deal could make this off-the-radar company a direct supplier to help Elon deploy the lightning-fast “Hypernet” from space… and connect devices with these satellites.

It’s a win-win for both this company and Musk…

And revolutionizes how the world receives internet for good…

The profit potential for this company is staggering.”

Ray wrote a report called Elon’s Greatest Breakthrough Yet: Retire Rich on the “Hypernet” Revolution that has all the details about the “hidden company” in case you want to invest in it.

To get a free copy of the dossier, you have to subscribe to Technology Profits Confidential, which we will be taking a closer look at in a bit.

Ray Blanco is the chief technology analyst at Agora Financial, which is one of the largest independent financial research organizations in the country. He also publishes his work via Seven Figure Publishing, an imprint of Agora Financial.

His investment philosophy is all about tracking down the biggest new technology innovations of tomorrow and investing in them today. He is always looking for companies that have the potential to reward investors who buy up shares early.

He has been sharing investment advice for 15 years.

What is Technology Profits Confidential? (The Newsletter)

Technology Profits Confidential is one of the newsletters that Ray Blanco publishes via Seven Figure Publishing.

What kind of investment insights does he share with his subscribers?

He says that every month, he tracks down the companies that are working on cutting-edge scientific breakthroughs; companies with the potential to hand early investors huge gains and he shares them with his followers.

If you sign up for the service, here is what you are entitled to:

How much do you pay to join Technology Profits Confidential?

The annual subscription fee is $49

Yes, it does. They issue a refund if you cancel your membership within three months of joining.

Ray’s Elon Musk’s Hypernet presentation centers on investing in a company that is working together with SpaceX to help it launch a constellation of LEO internet satellites.

He is on to something legit because StarLink is an important project for SpaceX. However, his assertion that satellite internet will make 5G obsolete doesn’t make sense because there has been a lot of investment (and hype) going into the 5G rollout, which wouldn’t be the case if people knew that it will be dead on arrival.

There are still a lot of challenges to overcome for projects like StarLink to be universally adopted and March 31 probably won’t hold as great significance as Ray suggests. That being said, it is an interesting project if you are into that kind of thing but from an investor’s point of view, there is a lot of work that will have to go into it for it to be a viable opportunity.