Bill Shaw of Stansberry Research released a presentation called Elon Musk’s Big Problem where he talks about a rare resource Tesla desperately needs and that you can make money off of by investing in the right company.

In the title of the presentation, it reads:

“Each Tesla Model 3 requires 121 lbs. of one rare resource, and supply is drying up. One analyst found a $4 stock he believes will be the biggest winner of a $30 TRILLION market opportunity…”

We will be taking a closer look at what he discussed during the presentation, including the name of the mysterious material, how he wants you to invest, and the newsletter he is promoting towards the end.

Bill Shaw recently did a presentation where his main point is that he expects demand for one rare resource material to blow up because the electric vehicle industry desperately needs it. 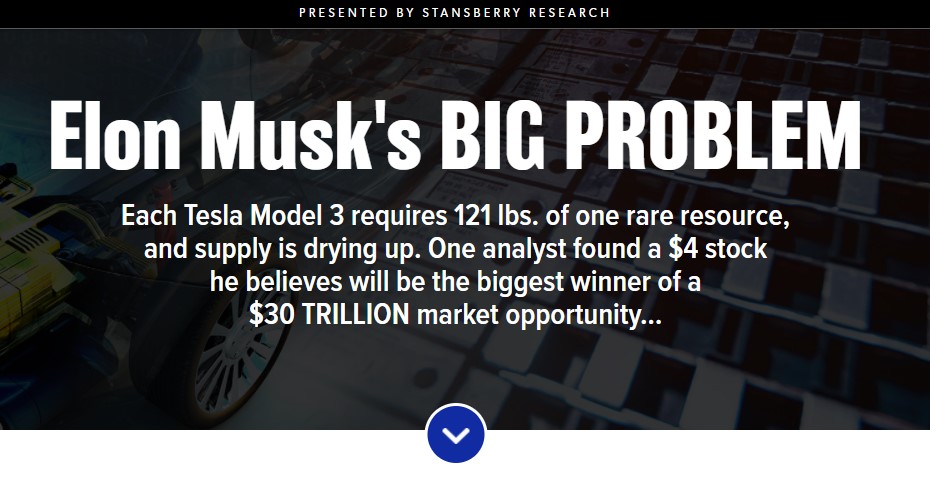 As demand skyrockets, he wants you to invest in one company that will be right in the thick of it.

Before we go further, the material he is referring to is Nickel.

Here’s how he starts his pitch:

As well as the future of every other electric vehicle manufactured today.

No, it’s not lithium.

There’s another resource even more essential to building electric vehicles.

In fact, every single Tesla Model 3 needs approximately 121 lbs. of this resource – compared to just 22 lbs. of lithium.

And, unlike lithium, supply for this critical element is drying up right now.” 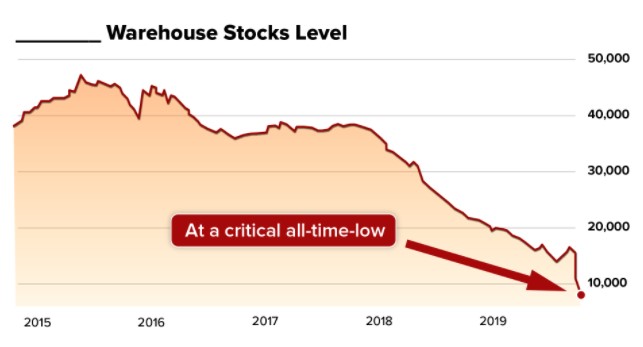 Bill then points out that Nickel shortages were never a problem when Tesla was the only major player in the EV industry. But now as more carmakers have started making (or intend to start making) electric vehicles, demand is set to go through the roof.

Bill Shaw says that as the number of electric vehicles (EVs) increases from 10 million today to as many as 145 million by the end of the 2020s, Nickel is going to be in higher demand than any other material used to make EVs.

Bill believes that it will be in higher demand than Lithium, Cobalt, and other materials because it makes up 80% of the battery we use in electric cars. 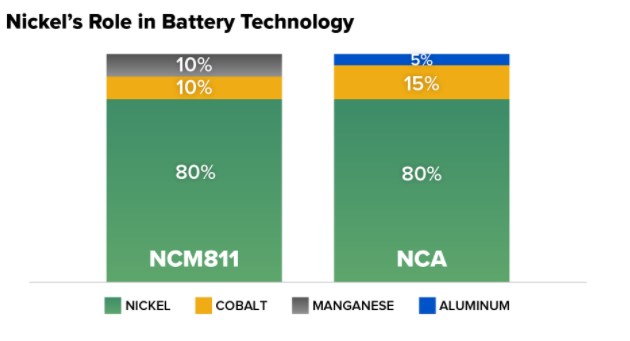 He also points out that Elon Musk is concerned by the shortage because it could hamstring his company’s goal to put more electric cars on the road.

Bill Shaw references Tesla’s 2020 earnings call during which Martin Viecha, Senior Director, Investor Relations at Tesla was asking Musk about the biggest constraints he was facing and Elon almost immediately started talking about the Nickel shortage.

As Bill puts it, Elon Musk was emphasizing that mining companies should ramp up their operations to mine more nickel.

During the meeting, Elon Musk was saying that those companies should NOT wait for Nickel to be back in demand to extract high volumes of it. Instead, they should do it now to forestall the shortage that is just around the corner.

Elon Musk also said that if Tesla finds a reliable supplier, it is willing to give them a big contract for a long period if they mine Nickel efficiently and in an environmentally sensitive way.

Bill Shaw says that this conversation pretty much confirmed his assertion that Nickel shortage is Elon Musk’s biggest challenge (and explains the title he went with).

Bill expects demand to rise 14-fold by 2030 because you cannot make a battery without the metal.

So, what could be causing the shortage?

Is Nickel a scarce resource?

Is it that we don’t have efficient processes to extract it?

Bill Shaw explains that a Nickel shortage is not due to it being scarce. He says it is an abundant resource. The problem is that it is not financially viable to mine (or at least it wasn’t until now).

“Nickel is actually one of the most common elements on Earth.

Now that we know that there is an opening there, how does he want us to invest?

Bill claims that he has found a $4 stock that is developing a big market share in the battle for this critical resource.

A royalty is a payment made to the legal owner of a property, copyrighted work, or franchise…

In other words, royalties are a percentage that is paid on all future sales.”

A royalty is a contract that gives the issuer the right to a percentage of the mineral extracted or revenue accrued from an operation in exchange for an upfront payment. Mining companies use these contracts to finance their operations because such operations can be quite capital intensive. For some companies, royalties are more attractive than debt or issuing equity.

Some companies exist for the sole purpose of purchasing pre-existing royalties as a way of creating a diverse portfolio of royalty assets that generate value for shareholders.

The company Bill Shaw is teasing falls under this category. He says,

“In this case, my favorite $4 stock is currently purchasing existing royalties from prospectors who hold the rights to the top nickel mines in the world…

In the last 12 months, they’ve been on a frenzy of new acquisitions.

They recently purchased the rights to one nickel mine that is fully permitted and “shovel ready” right now… Over the next 30 years, it’s expected to produce 50,000 metric tons of nickel every single year.

The little-known stock that I’ve found supplied the upfront investment to obtain the “royalty” on this mine.

In this case, the mine operator is obligated to pay them 2% of whatever they produce from an agreed-upon portion of the mine, per their royalty agreement.

My favorite stock doesn’t need to contribute any further capital to this project and will reap benefits from whatever resources are found on the property for years to come.

In two years, they’ve already assembled a portfolio of 18 royalties in the most resource-rich regions of the world…

So, there is a chance they’ll stand to profit from whoever Musk partners with…

So, this company owns royalties spanning multiple mining companies because there is no way of knowing which miner Tesla will choose. In diversifying its holdings like that, he says that it will likely benefit from a lucrative contract from Tesla or any other EV maker.

More on the company,

“Just in the past year, they’ve acquired six of the world’s largest Tier-1 nickel mines giving them a dominant market share in the future of the global energy supply chain.

And the best part is, as a first mover, this company has already looked at many (if not most) of all the available nickel royalties. And as they build a reputation, holders of any other royalties will likely give them the first opportunity to make a deal.”

Concerning the company’s leadership, he says,

Years ago, they started a gold royalty business, where they made one-time investments purchasing the rights to several gold mines, and were able to make huge profits on whatever gold was discovered there…”

In the report, he reveals its name and ticker symbol in case you wish to invest in it.

You can get a free copy of the report if you agree to join Bill’s investment newsletter called Commodity Supercycles.

Who is Bill Shaw?

Bill Shaw is the in-house commodities expert at Stansberry Research.

Stansberry Research is one of the world’s leading financial research firms. It started small in the heart of Baltimore in 1999 and is now a global publishing firm that provides market research to over a million readers in more than 150 countries across the globe.

Bill Shaw specializes in hard, physical assets like gold and silver. He has been in the resources business for 20 years.

While looking for an investment opportunity, Bill says that he travels to the mining sites to talk to the engineers and geologists in the field and since he has a professional background in natural resources, he can speak their language.

Bill claims to have traveled thousands of miles to places Chile, Kazakhstan, and British Columbia to find the best mining stocks and resource investments.

He then writes about these investments regularly and his followers read them and invest if they think it is the right thing.

Commodity Supercycles is an investment newsletter that Stansberry Research publishes that focuses on investing in commodities. It is headed up by Bill Shaw. 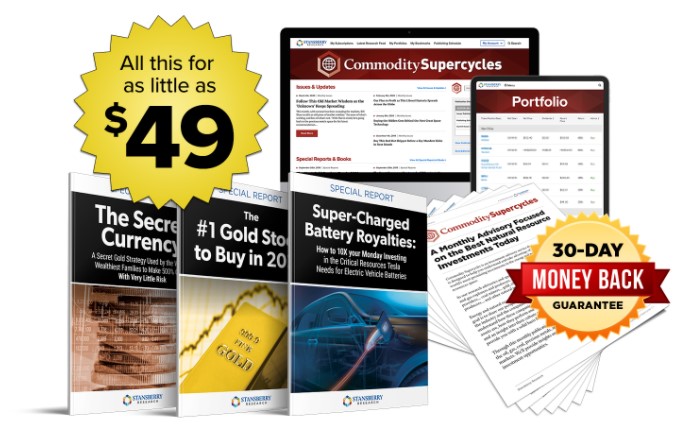 It is all about taking advantage of the most promising investments in energy and natural resources. The research focuses on oil and gas explorers and producers, drilling and oilfield service providers, coal miners, precious metal producers, and other natural resource companies.

Bill helps people understand how these industries work and how they can invest in them. He provides readers with a solid basis for making sound investments.

On top of monthly issues of the Commodity Supercycles newsletter, here is what you get when you sign up:

“Super-Charged Battery Royalties: How to 10x Your Money Investing in the Critical Resources Tesla Needs for Electric Vehicle Batteries

This report centers on the $4 royalty company that Bill teases in the presentation. He says that it already owns rights to 18 nickel and copper mines around the world making it the ideal company to back in case demand for Nickel goes through the roof.

In this report, Bill Shaw says that you should not sell off your gold bullion and reveals details of one gold royalty investment he recommends to those close to him.

The stock is trading at $10 per share, and according to him, it makes it easy for anyone to grab a stake in the tiny company because it may leap higher as the bull market in precious metals picks up.

The Secret Currency: A Secret Gold Strategy Used by the World’s Wealthiest Families to Make 500% Gains With Very Little Risk

In this report, he reveals a “secret” investment owned by some of the world’s richest families. He says that it is a form of gold and silver that does not involve mining stocks, mutual funds, options, futures, or bullion yet it is owned by dozens of wealthy. He believes that they like it because it has immense potential.

How much is Commodity Supercycles?

There are two subscription plans:

The difference between the two is that Premium comes with extra perks like a free subscription to a newsletter called Stansberry’s Investment Advisory and a copy of each of two reports: The 2021 Melt Up Blueprint and The No. 1 Biotech Stock for 2021.

Bill Shaw wants you to cash in on a potential Nickel boom if electric vehicle manufacturers start buying up the metal as it is a raw material for batteries.

He has chosen a royalty company and says that it is arguably one of the best ways to invest because royalty companies don’t have to cater for labor costs, insurance, permits, storage, and the risks involved in mining operations.

What he is saying makes sense and it could be worth looking into. However, do more research before you invest.