Although that title implies that he is talking about the eccentric CEO of Tesla and SpaceX, he quickly clarifies that it has nothing to do with “buying shares of Tesla,” which has been on a tear in 2020.

Instead, it is about another technology that has caught the eye of Mr. Musk.

In this review, I will walk you through the presentation and reveal the name of the company he is teasing.

What is Elon Musk’s Big Bombshell? (The Pitch)

The presentation centers on a technology that Jeff Siegel believes will be very impactful – even endorsed by Elon Musk. In Jeff’s exact words from the pitch:

“But in a stunning admission to the press, Musk explained that there’s a certain technology he believes will be MUCH BIGGER than the electric car…

And not only will this technology dwarf it but it will grow even FASTER than it, too.”

Elon Musk is considered a cult hero in technology circles because he has a hand in many pies – and seems to be doing exceptionally well in each sector he is in. Therefore, when he makes such a statement, he is going to be taken seriously, a fact that is not lost on Jeff.

So, what technology is he talking about?

Jeff quickly rules out battery technology, the Internet of Things (IoT), and 5G, which have inspired pitches like “The King of 5G Turbo Button Technology” and “Apple Fi” over the past few months.

After a bit of teasing whereby he talks about it (the technology) being able to harness “endless clean electricity” that turns homes and commercial buildings into “power plants,” he reveals that he is talking about Solar Energy – the infrastructure used to harness it.

And it adds up because harnessing the power of the sun can solve mankind’s energy problems. However, it is impossible to harness it fully and the technology we have doesn’t even scratch the surface of solar energy’s immense potential.

Many companies, including Elon Musk’s Tesla (through SolarCity), have invested heavily in solar energy infrastructure and big leaps have been made over the past few years.

Jeff reveals that although the progress made by multiple companies fueled by big investors has been commendable, there is one company that has beaten them all to the punch and that you should invest in it right now before it takes off buoyed by its progress (and competitive edge).

Jeff says this about it in the pitch:

“That’s because one tiny company has already beaten ALL of these heavyweights to the punch.

It’s a $184 million company that’s about to go from virtual obscurity to household name.

When it comes to putting this technology into every home and business in America, it’s completely transformed the game.

In fact, I’m going to take it one GIANT step further…

See, I believe that this little, barely known firm has cracked the code to endless FREE power.

One that can power EVERY single car, home, office building, and factory in the world, 24 hours a day, seven days a week…

So, those are some pretty ambitious claims, right?

He describes the company’s invention (which is protected by 90 patents) as a transparent substance that is sprayed on a surface to form “spray-on solar cells” that can harness visible light energy (from the sun and artificial sources) and convert it into electric energy.

It will be sprayed onto windows to form what he calls “solar windows” such as the one shown below: 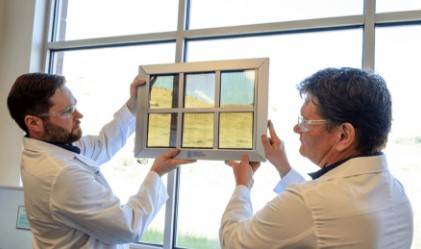 He has written a report about the company titled A Solar Window in Every Home with all the details you’d need to invest in it.

Jeff is only giving away free copies of the report to members of his investment advisory service, Green Chip Stocks.

Nevertheless, you don’t have to subscribe because after doing a bit of research, I found out that the name of the company is SolarWindow Technologies, Inc (OTCQB: SOLW).

It was originally called New Energy Technologies Inc. and it was formed in 1998. In 2010, it garnered a lot of attention from the media when it developed its new see-through “solar windows.”

“This first-of-its-kind, spray-on technology is capable of transforming everyday surfaces, such as windows, into energy-generating devices using both natural and artificial light sources, outperforming today’s commercial solar and thin-film technologies by as much as 10-fold under low-intensity irradiance.”

In May (2020), it announced plans to unveil the largest-ever array of its electricity-generating glass panes and that’s probably what piqued Jeff’s interest.

Jeff Siegel is a financial writer and investment analyst.

He is best known as the author of a bestselling book called Investing in Renewable Energy: Making Money on Green Chip Stocks that perfectly encapsulates his life and financial philosophy and explains his insistence in focusing on the alternative energy market for viable investment opportunities.

He, Chris Nelder, and the founder of The Outsider Club, Nick Hodge, are credited with coming up with the term “Green Chip Stocks” to refer to companies in environmentally-conscious industries that operate in a socially responsible way.

He founded a website called Green Chip Stocks (and an investment advisory bearing the same name) to write about investing in renewable energy and legal cannabis.

What is Green Chip Stocks? (The Newsletter)

Green Chip Stocks is the name of a newsletter offered by Jeff Siegel through which he alerts his followers to investment opportunities in what you’d call “progressive” industries. This includes companies developing alternative energy sources, cannabis companies, just to mention a few.

If you become a member of Green Chip Stocks, you will get

What is the subscription fee to join Green Chip Stocks?

What is the refund policy of Green Chip Stocks?

If you cancel your membership within six months, you are entitled to a full refund of your subscription fee.

Jeff Siegel’s presentation about Elon Musk’s Big Bombshell turned out to be an ad for his advisory service, Green Chip Stocks.

But that was not the only takeaway; it is also about a company that is manufacturing window panes that harness the light emitted by the sun (or any other artificial sources, eg. Street lights) to generate electric energy.

After digging into it, I discovered that the company is called SolarWindow Technologies, Inc. and although Jeff says some nice things about it, you shouldn’t rush to bet on it. I should clarify that I am neither recommending it nor saying that it is a bad investment. I leave it up to you to decide what’s best for your unique financial situation.