Rob Booker, who runs a podcast through which he shares investment advice, recently held a webinar about Echo Trades.

It centered on the story of an everyday farmer who managed to earn $1.4 million in 2020 by timing the market.

After sitting through the webinar and learning about echo trades, I decided to write this to reveal how the strategy works and the reason why Rob held the webinar in the first place.

What is Echo Trades? (The Pitch)

Echo Trades is the title of a webinar that was hosted by Rob Booker featuring a guy called Jeffry Turnmire. It was held to reveal a trading breakthrough called “Echo Trades” on which they will be basing their new advisory service. 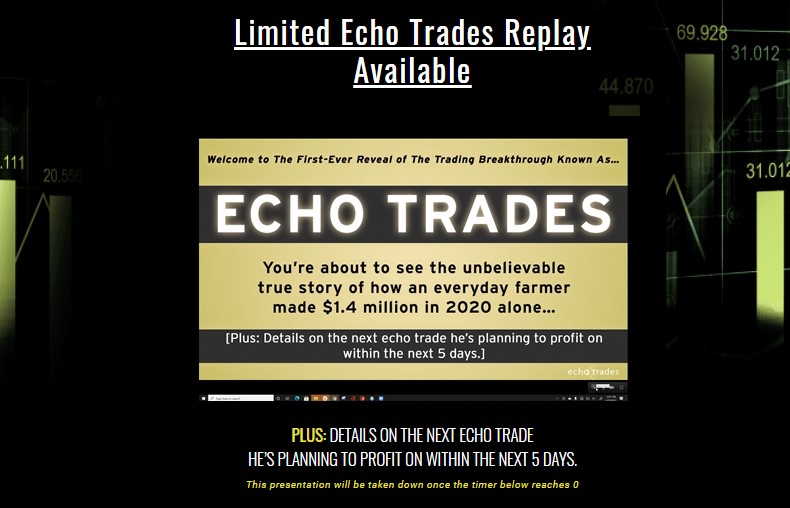 This strategy was discovered by Jeffry (an everyday farmer who made $1.4 million in 2020 alone). They say that he is trustworthy and that Rob had his lawyers go through his statements to ascertain that those trades were genuine.

They ascertained that Jeffry made a 4,183% return (with wins and losses factored in).

He says that he had been trading for 18 years before he created the Echo Trading System. Regarding his approach to trading, he says:

“I don’t make my focus to get outsized gains

But instead, to be as conservative as possible.

Many times, I’ll quit trades if they don’t start moving as I initially thought”

They say that details on the next echo trade he’s planning to profit from will be revealed within the next 5 days.

How do Echo Trades work?

The echo trades strategy is all about timing your moves in the market. Jeffry says that each stock has something they call an “echo.” It is a signal that repeats over and over again in a long enough timeframe of the stock if you “zoom out” on a price chart.

Here is an example he gives of Roku: 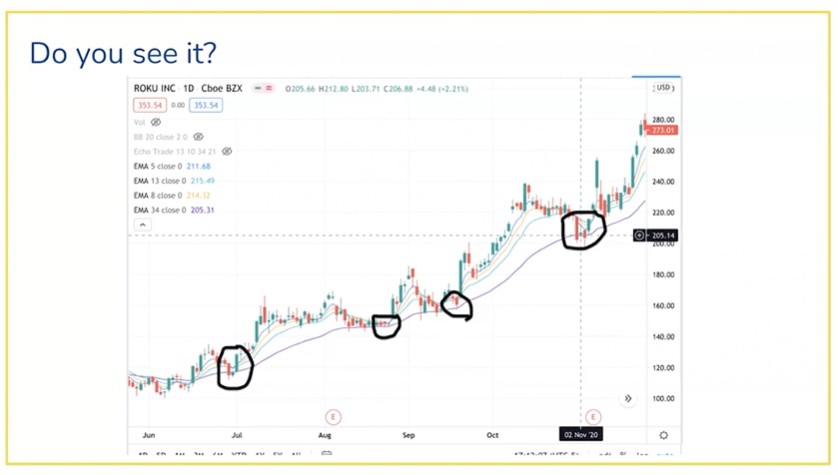 Jeffrey says that each of those dips is of the same magnitude (repeating like an echo) and by observing this, he says that it is easier to determine when next to enter the stock. They enable him to determine when a pullback is going to stop to time his entry appropriately.

He says that since it is repeatable, it has several layers of entry confirmation for each trade, and it provides clear exits or targets.

He learned the basic principle of echo trades from his Dad, Dr. Turnmire, who was a professor at a hydrology class that was required for his engineering degree. The lesson he learned was how to use reverse-engineering to understand the price movements of the trades

Since Echo Trades is based on timing the market, it reminds me of Trades by Scott (Scott Bauer) and Home Run Profits Adam O’Dell, which are both services that are based on the principle.

Who is Rob Booker?

Rob Booker is a financial trader who’s been professionally doing it for more than a decade. He is particularly adept at trading in the foreign exchange market. He claims to have made up to $7 million by trading.

He runs a website through which he gives his opinion on significant market events. He also runs a financial podcast that enables him to share the secrets that made him rich. He covers a diverse range of market topics.

Jeffry Turnmire is the guy Rob brought in for the webinar claiming that he discovered echo trades. They say that he is not an investment guru or had an involvement with the industry before the webinar and is merely a farmer who discovered the echo trading technique after 18 years of trial and error.

He will be running the service, sharing insights with subscribers of the Echo Trades advisory service.

What do you get when you join Echo Trades? 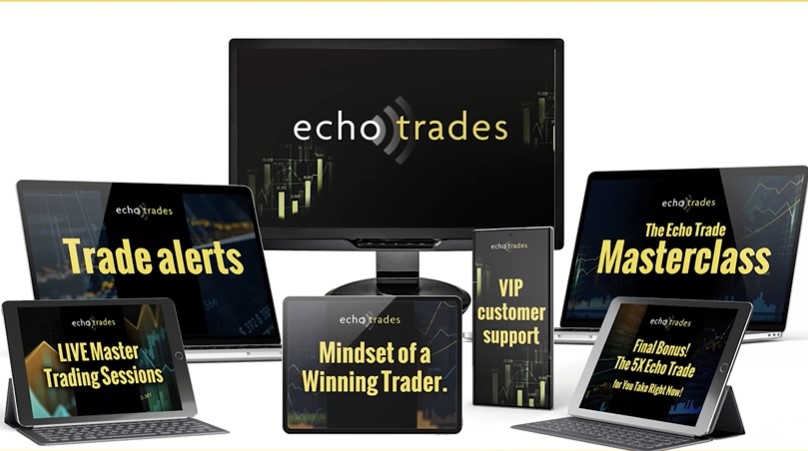 When you join the Echo Trades advisory service, you get:

How much do you pay to join Echo Trades?

Yes, they refund your money if you decide to cancel your subscription.

Echo Trades is a new advisory service that will be run by Rob Booker and Jeffry Turnmire. Jeffry is new to the financial services industry and he stumbled across the echo trades trading strategy after trading for 18 years.

The strategy involves using an echo trades signal to time your trades and then either buying the stocks directly or trading options. Jeffry claims to be a conservative trader who manages risk and is willing to walk away from a play if it doesn’t move as he anticipated even if it earns a profit.

Many analysts believe that market timing is not a sustainable way to trade in the long-term although day traders who use technical analysis will tell you that it can work reliably in the short-term. Therefore, if you are to follow Jeffry’s advice, be cautious and don’t expect to be a millionaire because the market is fraught with risks.