Nick Giambruno recently did a presentation about “Covert-23.”

From the onset, he was talking about the occurrence of a “Financial Pandemic” that will “infect portfolios the globe over” creating a need to “inoculate your assets.”

On this blog, we are accustomed to gurus predicting spectacular financial collapses before proposing solutions to them and this was no different, albeit with different connotations.

In this article, I give you an overview of what Giambruno was talking about and leave it up to you to decide what you’ll make of it.

What is Casey Research’s Covert-23? (The Pitch)

Casey Research’s Covert-23 is a presentation by Nick Giambruno during which he talks about a scourge that has hit the financial system in a way that may affect many investments. 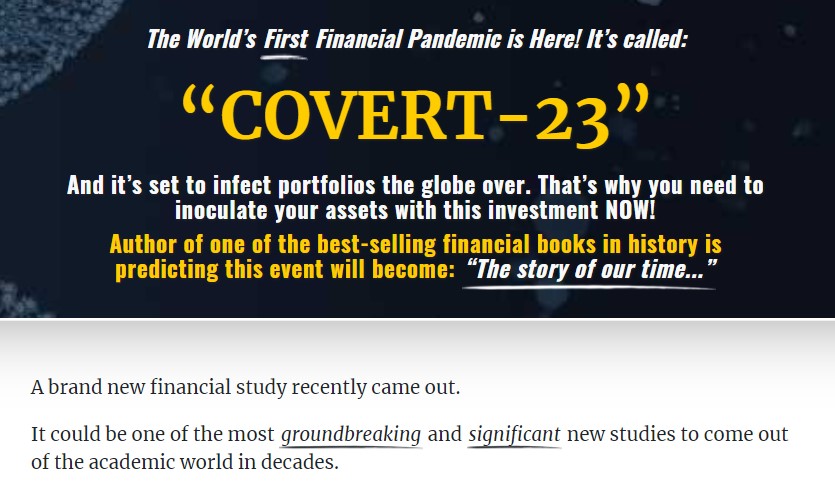 The premise of the presentation is that there is a group of 23 firms that control the global economy. Here is Nick explaining how this came about:

“These researchers, using a database of 37 million companies, looked at 43,000 transnational firms, and mapped the web of ownership between them.

They then applied advanced mathematical models, and the map they generated revealed 147 ‘Super-Corporations’ that control the global economy.

And we believe at the heart of the map lies just 23 firms (mainly banks) that form one giant ‘Super-Entity’ that controls around a staggering half of ALL the money flows on the planet.

Through sophisticated set-ups of offshore corporations, holding companies, bank accounts, trusts and other unusual financial structures, these firms have managed to silently and swiftly take over the global economy.”

He says that researchers from various disciplines conducted a study that revealed that most of the world economy is controlled by a small group of firms. Among the companies on that list are JPMorgan Chase, Bank of America, State Street Corporation, and Shell – these are the ones he mentions.

He says that the 23 firms are majority shareholders of big, influential companies like Uber, eBay, Airbnb, Disney, Google, and Amazon, just to mention a few.

Nick says that they are the ones behind the inequality gap, the polarized political system, and the financial crises such as the Global Financial Crisis of 2008 and the crisis of 1998.

He believes that they have negatively impacted the markets before and they have a way of doing this. He explains it as follows:

“The formula is relatively simple…

They position themselves in the middle of a speculative bubble, selling investments that they know are junk.

Then they vacuum up vast sums of money from the middle and lower floors of society.

States that allow them to rewrite the rules of commerce in exchange for the relatively few pennies they throw at them for their political patronage.

Finally, when it all goes bust, leaving millions of ordinary citizens broke and starving, they begin the entire process over again…riding in to rescue us all by lending us our own money back – at interest, of course!”

He says that they have been doing this for decades and are expected to do it once more.

Before we get to that, Nick lists three policy decisions that have created the perfect environment for exploitation:

Nick says that the “covert-23” own disproportionately large derivatives portfolios (that are, in total, many times greater than the global economy), and when this bubble pops, there will be a financial crisis of historic proportions. He expects the civilized world to be plunged into the deepest financial depression since the 1930s when everything unravels.

There is a special report Nick prepared that shared more information about these organizations. It is called Your “COVERT-23” Inoculation Program: How to Survive the Coming Collapse of Western Civilization. I’ll share more details about it later.

Read our similar review on The Super Halving event.

Nick believes that the Covert-23 have their hand in most conventional forms of investment. Therefore, to survive a possible financial depression, you have to “take back control of your own finances.” Here is an excerpt of him elaborating this:

“One of the first things you must do is learn how to take back control of your own finances.

It is imperative you understand that all retirement accounts and pension funds and all savings accounts and even money market funds (and especially ETFs!) should be regarded as money controlled by the “COVERT-23”.

The sooner you cash out of these investments, the sooner you can begin to inoculate yourself and your finances from the macro-risks now inherent in the system.

Another thing you should do immediately (if you haven’t already) is transfer some of your assets into gold.”

As that final paragraph indicates, one of his go-to investments is gold. In that sense, he reminds me of Robert Kiyosaki in a presentation titled “America’s Final Wealth Transfer” during which he also fronted gold as the ideal investment to hedge your portfolio in a crisis.

To be fair, gold has always been a safe haven investment that investors resort to when the markets plummet.

He says that two trends are going to drive gold prices:

He has written a report about investing in precious metals and it is called The Biggest Gold Mania in History: Casey’s Next 6 Great Gold Plays!

He also wants you to invest in Bitcoin and refers to it as “the hardest asset the world has ever known.” He prefers it to any other cryptocurrency because he believes that it is not controlled by anyone and its supply is fixed. He expects it to do well for the next decade as it gets scarcer.

He also likes it because it is divisible:

“What most don’t understand about Bitcoin is that each coin can be divided into 100 million units.

These units are called ‘Satoshis’ — named after its mysterious inventor, who is still yet to be verified.”

He has a report about Bitcoin called The New Crisis Currency: Why Every American Should Own At Least $100 of the Hardest Money Ever Known. It highlights the safest way to buy and store Bitcoins.

Nick Giambruno works for Casey Research where he is the senior analyst of the flagship investment newsletter, The Casey Report. I have reviewed presentations by him before promoting this service with the most recent ones being Reset the US Dollar and Lateral IPO.

Nick has been traveling the world looking for investment opportunities. He writes about his findings and helps people make the most of those opportunities.

He doesn’t shy away from saying that the best time to buy is “when there’s blood on the streets.” This means that he buys assets when they fall due to a market collapse or some other consequential event that causes it.

What is The Casey Report? (The Newsletter)

The Casey Report is the flagship newsletter published by Casey Research. It provides subscribers with contrarian ideas about investing and provides them with regular recommendations.

When you subscribe to The Casey Report, you receive:

In addition to the two reports (about Gold and Bitcoin), Nick also promises to send out another one I mentioned before called Your “COVERT-23” Inoculation Program: How to Survive the Coming Collapse of Western Civilization in which he lists the super-corporations that control the global economy.

He also reveals the names of the people running them and how you can re-configure your portfolio to prepare for the depression he is predicting.

How much do you pay to join The Casey Report?

You have 60 days to review your membership during which you can cancel it for a full refund.

The main takeaway from this presentation is that Nick Giambruno believes that a group of 23 firms (he calls them the “Covert-23”) control the entire global economy. However, he believes that they have been doing things unsustainably and the situation is about to unravel, plunging the economy into a depression.

To stay safe in the case that happens, he wants you to wean yourself off their influence. But since he believes that they control all retirement accounts, pension funds, savings accounts, and money market funds, you have to find alternative forms of investment like Gold and Cryptocurrencies.

To be fair, Nick has been predicting a gold bull market for as long as I can remember. Even in 2019, he was still talking about a bull market long before the pandemic came and Gold broke its resistance level as investors rushed to hedge their portfolios.

Some analysts agree with Nick when he says that inflation will be caused by quantitative easing making assets like gold and cryptos more desirable.

That being said, before you take advice from a stranger on the internet, do more research into it first to ascertain that it matches your goals and overall strategy.