If you are familiar with Marc Lichtenfeld and The Oxford Club, you may have come across an advisory service called Closing Bell Profits.

If you would like to learn more about how it works as Marc describes it, you have come to the right place because I will walk you through Lichtenfeld’s investment strategy here. Then I will leave it up to you to decide whether it is worth paying 10 grand to join.

What is Closing Bell Profits?

Closing Bell Profit is a follow-along investment advisory service offered by The Oxford Club and edited by Marc Lichtenfeld.

Marc launched it in September 2019 and promoted it with the promise of helping traders capture massive returns in less than 24 hours.

Here’s how they describe Closing Bell Profits on the Oxford Club official website:

“Marc has pinpointed a rare weakness in the trading of one single ticker symbol that hits right before the closing bell. It happens at exactly 3:45 p.m. every trading day. And it gives Members the chance to extract $2,500 repeatedly. Marc uses a proprietary computer program each day to determine if that day will offer a profit opportunity. And when he sees one, he notifies Members just before the 3:45 p.m. trade, allowing them to pocket outsized profits in just 24 hours.”

There is a lot to unpack there, so let me first explain the concept of a “closing bell” in trading.

(To explain the rest of the talking points, I will revisit one of the pitches they published promoting the service).

What is a Closing Bell?

The closing bell figuratively refers to the end of a trading day bringing to a close an exchange’s trading activities. Although not all exchanges use a physical bell, the New York Stock Exchange rings electronic brass bells at 4.00 PM EST to signify the end of active trading.

When the closing bell rings (or in the case of exchanges that don’t have physical bells, the day’s trading closes), there is usually a notable surge in trading activity.

Who is Marc Lichtenfeld?

Marc Lichtenfeld is a professional trader and fund manager who has consistently outperformed his benchmark index (The S&P 500) by investing in the biotech sector. He is the Chief Income Strategist at The Oxford Club.

He specializes in formulating income-generation strategies and recommends investments to his subscribers within this area.

He started his career at the trading desk at Carlin Equities before he moved to Avalon Research Group where he was a senior analyst. Before he joined The Oxford Club, he was a senior columnist on TheStreet (founded by CNBC’s Jim Cramer).

His insights have appeared on Barron’s, The Wall Street Journal, U.S. News & World Report, Yahoo Finance, Fox Business, and CNBC. His book, Get Rich with Dividends became a best-seller after he released it in 2012.

Although Lichtenfeld has an impressive CV, whenever he promotes his newsletters, he tends to oversimplify complex concepts in a way that can be easily misinterpreted. Therefore, do your homework before you implement his recommendations.

In a presentation dubbed The Last Ticker Symbol You’ll Ever Need, Marc explained that his strategy takes advantage of the “End-of-Day Surge” that happens at around 3.45 PM just before the closing bell at 4 PM. Here is a chart he provided in his pitch:

The surge is caused by traders piling in with last-minute trades before the session closes, as I highlighted earlier.

Lichtenfeld says that he has found a way to exploit that predictable surge.

Here is a summary of the key takeaways regarding how this service works:

Some examples of gains people have earned using it, as shown on the order page include:

The name of the special ticker symbol is VXX. Here is how he describes it in the presentation:

“In short, we found that one particular ticker symbol was most sensitive to the End-of-Day Surge.

And this symbol – which I’m going to reveal to you now, as promised – is VXX.

Not many people know about the VXX.

Unlike most tickers symbols, it’s not a stock, and it doesn’t represent a company.

Rather, VXX is a security that moves based on market volatility.”

And that volatility is driven by “The End-of-Day Surge.” Its movement produces gains and he demonstrates that with a graph: 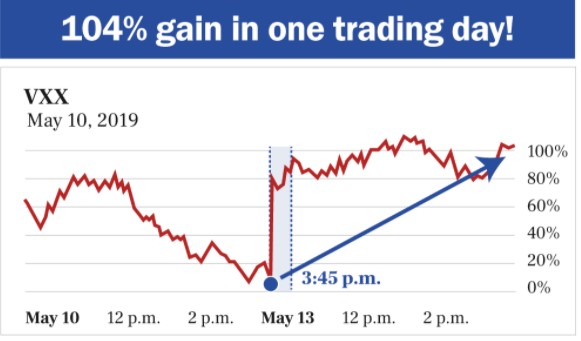 Unfortunately, there is no money-back guarantee. Instead, they give you a one-year “promise” in case Marc fails to reach his targets: 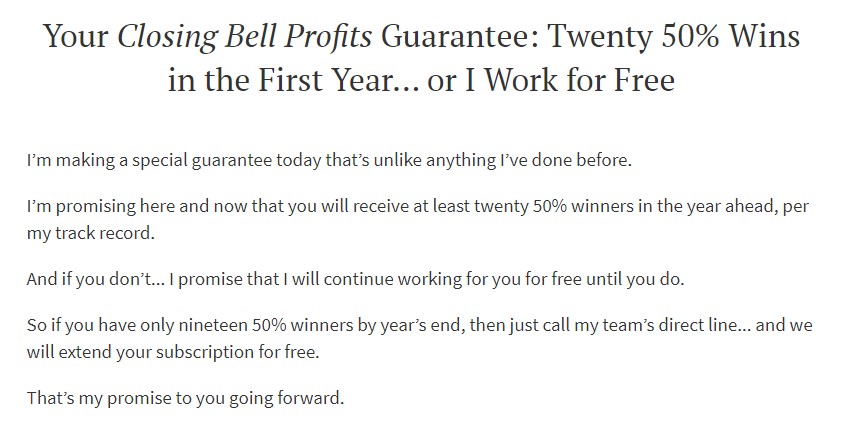 Closing Bell Profits is meant to only be available to a limited number of people:

“But because I can’t allow too many folks in, I’m limiting the total number of people in the doors today to just 275 on a first-come, first-served basis.”

I can’t ascertain whether they are enforcing this.

Now, Marc Lichtenfeld assures us that Closing Bell Profits is built on a proprietary system that can pinpoint the direction of the VXX indicator with 80% accuracy. The caveat is that those results were derived from historical back-testing going back 10 years.

The problem with backtests is that people have trouble trusting the integrity of the testing parameters. You have to trust Marc’s words, which may not be enough for a retail investor especially when you are putting thousands of dollars on the line (starting with $10,000 non-refundable just to subscribe to the newsletter).

That, however, doesn’t warrant dismissing his strategy because he backs it up with some real (albeit past) results. Again the problem with that is that he cherry-picks the profitable trades and doesn’t reveal the losses made, which need to be factored in to give prospective clients the full picture.

I am raising these points, not to discount Closing Bell Profits, but to encourage you to dig deeper into how the service runs if you are considering signing up for it.