Chris DeHaemer’s End of Bitcoin pitch has been getting a lot of attention of late so I thought I’d take a closer look at it.

It concerns an announcement that will supposedly spell the end of Bitcoin and create opportunities to earn quadruple-digit gains without owning cryptos.

In this article, I summarize the main talking points of the presentation for you to hopefully make a more informed decision about DeHaemer’s proposition.

What is Chris DeHaemer’s End Of Bitcoin Pitch? (The Pitch) 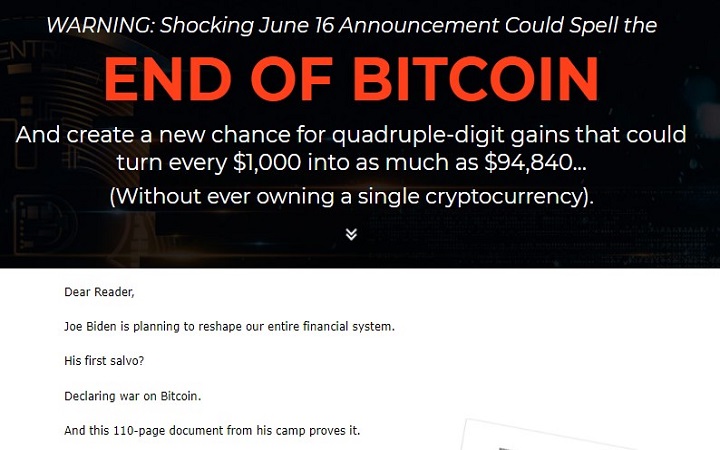 He says that the motivation for President Biden to end Bitcoin’s relevance is two-fold.

First, he thinks that the federal government wants to retain control of the nation’s currency and wouldn’t risk citizens opting for an alternative like Bitcoin. To quote him:

As the Financial Times puts it, “[Bitcoin] poses a significant threat to greenback’s supremacy.”

I expect Biden to do the same with Bitcoin in 2021.

It’s easy to understand why…

As Investopedia puts it, “Governments control [their] currencies… to exert economic influence.”

The government dictates how money can be transferred… tracks its movement… determines who profits from that movement… and, most importantly, collects taxes on it.

It risks losing all this control if Americans switch to non-government money.”

He says that such a move would be similar to the one FDR made in the 1930s when he issued Executive Order 6102 banning people from hoarding gold coins, bullion, and certificates. He says that FDR issued the order because he felt that the greenback was starting to play second fiddle to gold.

The second reason DeHaemer thinks the Biden Administration wants to go after Bitcoin is the carbon footprint that the Bitcoin network (particularly the miners) has. It is no secret that the Democrat-led government wants to implement measures to curb climate change. So DeHaemer made the connection that since the Bitcoin network is energy-intensive, the government will want to go after it.

“The Bitcoin network consumes more power than 159 of all 195 countries in the world.

So it’s easy to see why environmentalists hate Bitcoin.

As one director of the Sierra Club said, ‘[Bitcoin threatens] progress we are making toward moving toward a low-energy, low-carbon economy.’

Do you think Biden will ignore Bitcoin’s dirty secret?

Oil and crypto analyst Ethan Lou explains, ‘Bitcoin’s environmental footprint will haunt it… Bitcoin is the natural next enemy [of environmentalists].’

Consider this: Getting rid of Bitcoin lets Biden kill two birds with one stone.

DeHaemer then says that the government wants to issue a digital dollar, something that appears to be concerning not only libertarians but also Wall Street players. This is the announcement he alludes to when he says that there will be an announcement that enables you to earn quadruple-digit gains. He says this in the presentation:

“While Biden starts to dismantle Bitcoin, I expect a digital dollar to take center stage…

For investors who understand that the war against Bitcoin goes hand in hand with this huge shift toward a digital dollar, it adds up to an opportunity to generate immeasurable wealth in a short period.”

And this is the point at which he reveals the technology he expects to thrive after all those changes; the Blockchain.

He says that the digital dollar will be built on the Blockchain, just as Bitcoin and other cryptocurrencies are. And as the country transitions to a digital dollar, he wants you to find a way to invest in the Blockchain. He believes that investing in it could earn you gains as high as 6,660% in the coming years.

He is not the first investment guru to talk us into investing in Blockchain-related investments. Guys like Teeka Tiwari (who calls it the Genesis Technology) and Matt McCall (“The Awakening” Event) have beaten him to the punch.

“Its technology is the vital component for almost all blockchain hardware.

Nasdaq says this company is at ‘The Top of the [Digital Currency] Food Chain.’

Since the first blockchain went operational with Bitcoin’s launch on January 3, 2009, this company’s shares soared by 1,585%.”

He doesn’t reveal much more important information to help us identify it and says that he has written a report about it called The $400 Trillion Blockchain ‘Back Door.’ To get a copy of it you have to sign up for his newsletter.

Who is Chris DeHaemer?

Chris DeHaemer is one of the investment gurus that work for Angel Publishing where he edits the Bull and Bust Report. He also writes a free newsletter called Energy and Capital and is the investment director of Crisis and Opportunity.

Chris’s bio states that he has always been an advocate for fast, safe ways to make money and grow your retirement nest egg. It also says that he has been traveling the world looking for life-changing opportunities for his readers.

He has always insisted that he doesn’t go for obvious plays if they are only going to earn pennies and has “crawled around on his hands and knees” searching for plays with the most potential profit in frontier markets.

What is the Bull and Bust Report? (The Newsletter)

To get a free copy of the special report about the Blockchain-based company, you have to sign up for The Bull and Bust Report.

He uses this advisory service to share his research with investors. His strategy is based on a proprietary charting strategy that spots superstar stocks early in development in industries like energy, real estate, and tech.

In addition to a copy of The $400 Trillion Blockchain Back Door, here are the other benefits to becoming a member of the advisory service:

How much do you pay to join the Bull and Bust Report?

If you join via the presentation, a one-year subscription costs $99 while two years go for $179.

Does the Bull and Bust Report have a Refund Policy?

Chris promises to refund your money if you cancel your subscription within 60 days of joining.

Chris DeHaemer’s End of Bitcoin pitch is about investing in the Blockchain. He regards it as the most valuable technology to emerge on the internet and believes that it will create the best, biggest, and most indisputable moon-shot opportunity of the decade.

He wants you to start finding ways to invest in the blockchain and suggests that you invest before it takes off and becomes more widely used. He is backing a company that I would have loved to reveal to you as we always do with teasers here but the clues were not clear enough.

In conclusion, I think investing in such companies is not a bad idea as long as you know what you are doing and have done your due diligence. And as always, don’t invest more than you can afford to lose.