The favorite resource of America’s most famous investors could help you double your investment in the next four years.”

After watching the entirety of Mizrahi’s presentation, I put together this article to summarize his key points for your benefit. By the end of it, you should be in a position to decide what to make of his approach.

What is the 10K Playbook? (The Pitch) 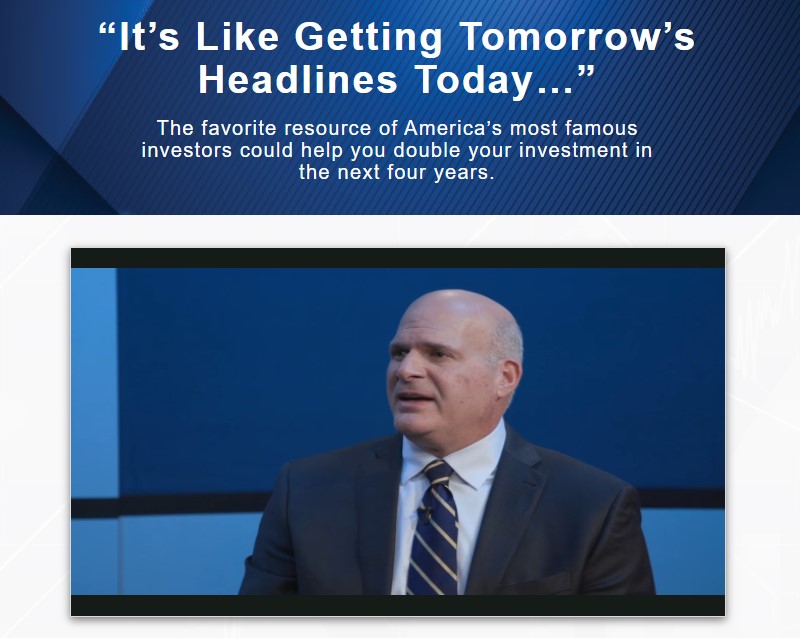 It centers on a document that Charles refers to as the 10K playbook or the Billionaire’s Playbook. Right off the bat, he explains that it is a report that all public companies have to file and that executives have to swear under oath that it is accurate.

Corina goes as far as saying that:

“… they’re [those documents] a treasure trove of corporate intel so sensitive, that it’s usually locked behind the doors of America’s most elite board rooms. But thanks to a little known act of Congress, it’s released one time per year.”

Mizrahi tells us that studying the document in the past has enabled him to spot companies like Apple, Huntington, and Microsoft before they made historic gains and now he wants to share his insights so that other people can learn how to spot stocks that may go up over 100% in the next four years.

Charles quotes Jim Rogers who once told a reporter that the best advice he’s ever got was from a guy who told him to take annual reports seriously. Apparently, the man told him that in reading them, and I quote,

Warren Buffett also once said this about annual reports:

“I don’t think we’ve ever gotten an idea, you know, in 40 years from a Wall Street report. But we’ve gotten a lot of ideas from annual reports.”

These are the quotes that Charles uses in the presentation and after tracing them, it becomes pretty clear that the billionaire’s playbook is just a euphemism for a company’s annual report.

So, why is Charles Mizrahi such a big fan of annual reports?

In the article where that Buffett quote was lifted, the billionaire explained that he studies a company’s annual report to understand its operations and its competitors from the vantage point of a business owner, instead of that of a shareholder. This, he believes, gives you an edge over other investors as you’ll be better informed and be more likely to spot good opportunities.

Mizrahi shares that outlook as evident multiple times during the pitch. He insists that understanding a business by studying its annual report enables you to hold its stock even during periods when short-term bad news tank it because you have the bigger picture. He also says that by studying the 10-K, you can determine the intrinsic value of a business and can use that to find undervalued stocks.

He is in favor of holding stocks for long periods rather than trading because the long-term approach ensures that he doesn’t miss out on big returns.

It is important to mention that all the gains Charles is talking about are in terms of the compound annualized growth rate – it is the rate of return that you get when an investment grows from its beginning balance to its ending balance while all its profits were reinvested at the end of each year of the investment’s lifespan.

Charles says that after studying its 10-K report, it shows that it is a great buy and that you could see gains of 100% or more in the next four years. Here are a few details about it:

He has written about it in a report called How to Invest With the Billionaire′s Playbook: My No. 1 Stock to Own Right Now. It gives you an overview of the key factors to look for in a company’s 10-K, the critical factors to understand before buying a stock, and the one thing investors ought to look for to unlock profits.

Charles Mizrahi is an investment analyst who works for Banyan Hill Publishing. He joined the firm in 2019 and has since been sharing his insights with readers via an advisory service called the Alpha Investor. He once did a presentation with Sarah Palin (former governor of Alaska) called the “American Prosperity Summit” promoting the newsletter.

His bio says that he wasn’t born into a rich household. He was born into a blue-collar family and grew up in Brooklyn, New York. His upbringing taught him that every dollar counted and he claims that that is the mindset that drove him to start sharing investment insights with “Main Street” investors.

He has been in the finance sector since he was 20. As he was entering the industry, he was working on the NYSE trading floor. He worked his way into becoming a money manager where at one point, he oversaw $200 million-worth of assets. He claims that at the age of 35, Barron’s feted him as the number one trader in the nation.

He presents himself as an experienced trader with many decades of experience who’s trying to help average investors make money in the stock market.

What is Alpha Investor? (The Newsletter)

As I mentioned at the beginning of this review, the pitch was all about promoting Mizrahi’s investment research service, Alpha Investor.

As soon as you join the newsletter, Mizrahi will send you a copy of Beginner′s Guide to Investing and his Portfolio Guide. These are meant to acclimatize you with his “unique approach to finding the best deals in the stock market.”

How much do you pay to join Alpha Investor?

For one year of Alpha Investor, you only have to pay $47

The newsletter has a one-year money-back guarantee.

Closing Remarks on The 10K Playbook

When Charles Mizrahi released the 10K Playbook, his goal was to pitch his newsletter and explain his investment strategy. His strategy involves studying annual reports, which he refers to as the “10K playbook” or the “billionaire’s playbook.”

He explains that annual reports enable him to understand a company from the perspective of the business owner and not just from that of an investor – an opinion shared by billionaire investors like Warren Buffett and Jim Rogers. It enables him to determine its intrinsic value and can, therefore, hold on to it in the long haul even when it experiences short term dips.

He is a firm believer in buying and holding good businesses because he sees it as the best way to earn big returns without leaving anything on the table (missing out on gains because he closed his position too soon).

To be honest, Charles Mizrahi sounds a lot like Warren Buffett in his presentation. That being said, if you want to sign up for his investment research service, you should not forget that there are no guarantees that his strategy will work; there are risks involved in any investment.