Don Yocham of the National Institute of Cannabis Investors recently released a presentation with the header “The Most Successful Cannabis Founder in History.”

The pitch was a bit different from what we are used to because he reveals the name of the company that he wants you to invest in but with the caveat that you have to sign up for a premium advisory service to receive full details regarding it.

This article is a quick overview of the presentation meant to give you a gist of what it is all about. Keep reading to learn more.

What is The Most Successful Cannabis Founder in History? (The Pitch)

The Most Successful Cannabis Founder in History is a pitch put out by the National Institute of Cannabis Investors (NICI) concerning investing in a private pot company. It was also meant to promote one of the Institute’s advisory services, the Cannabis Venture Syndicate.

The National Institute of Cannabis Investors is an organization that brings together CEOs who have run billion-dollar companies as well as politicians who know the regulatory climate. Their goal is to expose retail investors to the kind of opportunities they wouldn’t otherwise have access to. 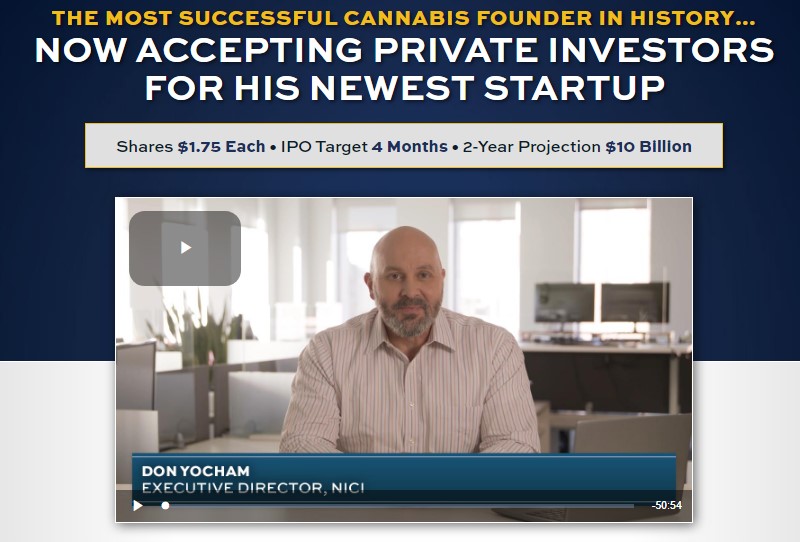 The presentation, which is hosted by Don Yocham and features Bruce Linton, floats the idea that cannabis is the fastest growing industry in the world and that we are likely to see a company reach a $100 billion valuation.

Bruce Linton is introduced by Don as a Canadian entrepreneur who founded a highly controversial new company. That company, as we later find out, is Canopy Growth (CGC). Due to the success of Canopy Growth, Don refers to him as “the most successful cannabis entrepreneur in the world.”

Canopy Growth is the largest publicly traded cannabis company by market cap and is the first company of its kind to be listed on the NYSE. It was also the first pot company to reach a valuation of 1 billion dollars.

Bruce was thrown out of the company he helped start and has since joined a new small company that he wants us to consider investing in. As Don says it in the presentation:

“See, like many true entrepreneurs, he’s moved on from the company he founded seven years ago.

Today, he’s the executive chairman of a new startup.

As you’ll see, this one could be even bigger than the last.

Now, this company is still private. They’re planning an IPO in the first quarter of 2021.

But today, they’re accepting a limited number of early investors.”

The company Bruce is heading now is Gage Cannabis. 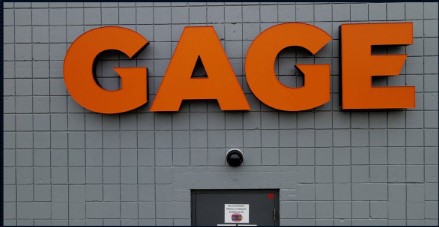 What do we know about Gage Cannabis? More from the pitch:

“Right now, they’re offering shares of their company at a $350 million valuation.

Which is an incredible deal. Because by the time this company goes public, which they’re planning to do in less than four months from now, they could be worth well over $1 billion…”

So, it is a private pot company with a valuation of $350 million, it may go public in the first quarter of 2021, and Don and Bruce expect it to reach a valuation of $1 billion when that happens.

“I joined Gage Cannabis as the executive chairman because it’s in Michigan.”

He then goes on a tangent explaining why Michigan is the best state to run a cannabis company from arguing that if you have a good product, you stand to do well there.

Interestingly, rather than grow their plants in a giant warehouse, they broke it up into a bunch of different warehouses:

“So what Gage did is take that giant cultivation space and broke it into a bunch of different rooms.

By growing small batches of 200 to 250 plants with one to three strains in each room, you’re protecting yourself from massive crop losses.”

Bruce says that this system ensures that their product is of high quality and it affords them better control of various elements.

In the first quarter of this year, that was up to $5.8 million.

They are also opening up more stores to tap into the market:

“In January, Gage only had one store open. As of August, we had five stores open.

Within the next few months, we’re expecting to have at least 10 stores open. By the end of 2021, we’re going to have more than 20.

That’s enough for us to be within a one-hour drive of 90% of Michigan’s entire population.”

They are also increasing yield:

“In January, Gage was producing about 200 pounds of cannabis a month. By December, that was up to 1,000 pounds a month.

Now that we have three cultivation facilities open, that’s going to continue to grow.

Bruce provides more information throughout the pitch and it is all tied in with the advisory service provided by NICI – they promise to provide you with more detailed info about the company if you subscribe to it.

Don Yocham considers himself an expert at cannabis investing since most of what he does is write and talk about the fledgling market and opportunities to be had for investors.

He works for the National Institute of Cannabis Investors (NICI) as its executive director. Before he took up the role, he was the head of private deals for the Cannabis Venture Syndicate publication. He is also the director of cannabis investing research at Money Map Press, which is affiliated with NICI.

We have reviewed a few publications and presentations by Money Map Press, including Money Calendar Pro by Tom Gentile, The Virtual Black Diamond Conference, and The Biggest Tech Rollout in History (Michael A. Robinson).

Don has been in the financial services industry for 25 years. He made his entrance when he worked in the trading pits of the Chicago exchange. He went on to introduce institutional investors to new markets in the early 2000s. He also helped his clients navigate the Global Financial Crisis of 2008.

Of late, he has been traveling the country on behalf of the Cannabis Venture Syndicate, meeting with stakeholders in the cannabis industry and talking to them about the biggest and best private deals.

What is Cannabis Venture Syndicate (The Newsletter)

On the NICI website, the Cannabis Venture Syndicate is described as follows:

“A brand-new research service dedicated to bringing average investors four to six private investment deals over the next 12 months.”

That brief description pretty much sums up what this advisory service is all about: finding private investment opportunities in the marijuana industry that are likely to pay off in twelve months.

They mention that the deals you are exposed to as a member are the ones likely to earn returns of 1,000% to 100,000% within that period.

They argue that private investment is more profitable than investing in public companies. Don reinforces this in the sign-up form by saying:

“And remember, 95% of the profits go to the handful of lucky investors who get in on the early, private rounds.”

When you sign up to become a member through this pitch, you are entitled to the following (about Gage Cannabis):

In addition to that, you get the following as part of your one-year subscription:

How much does it cost to sign up for Cannabis Venture Syndicate?

No, the subscription fee is non-refundable.

Closing Remarks on The Most Successful Cannabis Founder in History

The whole point of the presentation was to recruit new members to NICI’s Cannabis Venture Syndicate and they bring on Bruce Linton to add gravitas to their cause.

How so? Bruce was a founder of Canopy Growth and is billed as someone who knows the industry very well (since he founded the biggest publicly traded company in the marijuana industry). It’s like bringing in Bill Gates to talk about a fledgling software company that he expects to do very well; of course, you’d take his word for it.

Throughout the presentation, they draw comparisons between Gage Cannabis and Canopy Growth, telling us something along the lines of if Bruce Linton helped Canopy grow by 113,680% in a few years, you should consider investing in his new company for returns that could match those of Canopy.

That being said, the cannabis industry is arguably one of the fastest-growing industries in the world. However, be cautious as you invest and never invest more money than you are prepared to lose.