Briton Ryle, through Angel Publishing, recently did a presentation in which he promises to show you “How to Take Advantage of Wall Street’s $23 Billion ‘Secret Weapon’”

In this piece, we will find out what that secret weapon he is talking about is as well as how it works. I will also share details regarding the advisory service he is promoting.

What is Wall Street’s $23 Billion Secret Weapon? (The Pitch)

Very early into the presentation, we learn that what Briton is referring to as “Wall Street’s $23 Billion Secret Weapon” is a proprietary trading algorithm that allows him to identify stocks with profit potential. 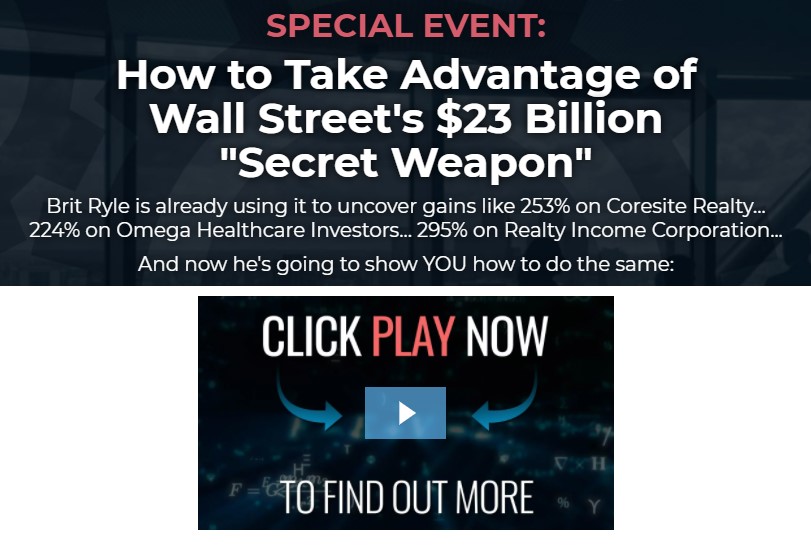 The title mentions ‘Wall Street’ because Dave Roberts (the interviewer) tells us that nearly all trades made by major investment banks are done using computers. He says that they typically spend billions of dollars on algorithms that are quickly replacing human traders. Those algorithms are designed by engineers and they can make thousands of trades in a second. We saw this in a presentation by Jeff Clark about Pre-Programmed Stocks.

That’s why Briton says that he wants to show us how to emulate those institutions by allowing us to access a proprietary trading algorithm he developed called Alpha Profit Machine. It uses “sophisticated formulas” to find undervalued stocks.

It works in two ways:

He says that he goes for small-cap stocks that are undervalued because they have the potential to go up quickly:

“I’m zeroing in on small-cap stocks…

But not just any small-cap stocks.

I’m looking for ones that could be due for a BIG price movement.

After all, some companies are small for a good reason.

They may simply be small companies with small customer bases…

And we don’t want to invest in those companies.

Instead, we’re looking for companies with an incorrectly cheap share price.

Companies that should be worth more…

Much more, in the near future.

So we need to lock in on stocks that are about to explode in price.”

When it comes to Alpha Targeting, or spotting those small-caps that are about to explode in price:

The algorithm does this by looking for three key signals:

He explains each of those metrics, starting with positive cash flow per share…

“The first metric, positive cash flow, is just a technical way of showing that the company is taking in enough money to support the business.”

He targets companies that have positive cash flow because it is an indicator of financial stability. It means that the money it receives is more than it spends. And this brings us to the next metric, an uptrend in return on equity, which Briton explains as important…

“And the second metric tells us that the rate of cash flow is improving.

Not only are they making more money, but the speed at which they’re making that money is also increasing.”

This is a bit like the previous one with the difference being that it factors in the time element. It gauges how fast the cash flow is improving. The final metric is revenue growth and/or profitability that exceeds the industry average…

“When a small-cap’s profitability exceeds the industry average that almost always means that the stock is cheaper than it should be.”

This one shows whether the stock is undervalued. Growth and value investing rely heavily on finding undervalued stocks with growth potential.

The second part of Briton’s investment strategy is Alpha Timing, which he explains as follows…

“We don’t pay attention to rumors…

Instead, we use clear mathematical signals.

And in this case, the key signal is:

“Just like an earthquake, there are often small tremors beneath the surface when a stock is about to take off.

There are little rumbles of buying…

Small, hard-to-detect activity below the surface…

But if you can pick up on these subtle buying signals, you can get in right before a huge price movement…

And that’s exactly what Alpha Timing is designed to do.

By focusing on small buy orders, Alpha Timing locks in on early movements that most others miss.”

This is all about timing the market. Briton tells us that his system lets him get in on undervalued trades at the ground floor before they take off.

By combining stock picking and market timing, he says that he can trade as efficiently as Wall Street investors. He wants you to sign up for his advisory service (also called Alpha Profit Machine) to gain access to those trades and his investment strategy in general.

Who is Briton Lyle?

Briton Lyle is an investment guru who works for Agora Financial’s publishing imprint called Angel Publishing. He has been in the finance industry for more than 20 years.

He is an editor who publishes newsletters like The Wealth Advisory that covers income investing, dividend growth stocks, and Real Estate Investment Trusts. He also edits Real Income Trader that deals with options trading.

He uses fundamental and technical analysis as well as what he refers to as “good old-fashioned horse sense” to help individual investors grow their wealth.

What you get when you sign up for Alpha Profit Machine

How much do you pay to join Alpha Profit Machine?

The subscription fee is non-refundable.

Alpha Profit Machine is an investment advisory service that is named after the proprietary trading algorithm on which it is based. Designed by Briton Ryle and his technical team, it enables him to find undervalued small-cap stocks and time his trades to maximize returns.

Although Brit says that they only have 450 spots for new members to join his advisory service to keep the membership small and avoid fluctuating the prices of his recommendations, I think that limit is just meant to inspire a sense of urgency. It is a common tactic used by investment gurus to get people to sign up for such services.

One thing that stuck with me as I was going through the presentation was how Briton glosses over how he relies on market timing. Now, I have to point out that it is a controversial trading technique; whether it works depends on who you ask because while some financial professionals believe it cannot work, others swear by it. Ultimately, what most of them agree with is that making it work over a long period is a tough ask. Keep that in mind as you mull over signing up for the newsletter.