Wondering what the “Bitcoin Key” is all about?

Casey Research has been promoting a presentation by Dave Forest about Bitcoin.

They each refer to the same pitch where Dave Forest touts a company that he thinks will solve a major flaw that will affect the technology industry with Bitcoin being the biggest casualty.

In this piece, I walk you through the presentation as I reveal what Dave is talking about, the investment opportunities he discusses, and how you can invest in those opportunities.

Introduction to The $3.1 Trillion “Bitcoin Key”

Dave Forest believes that while most people are obsessing over the price of Bitcoin, this entire growth could come to a halt without one piece of technology. 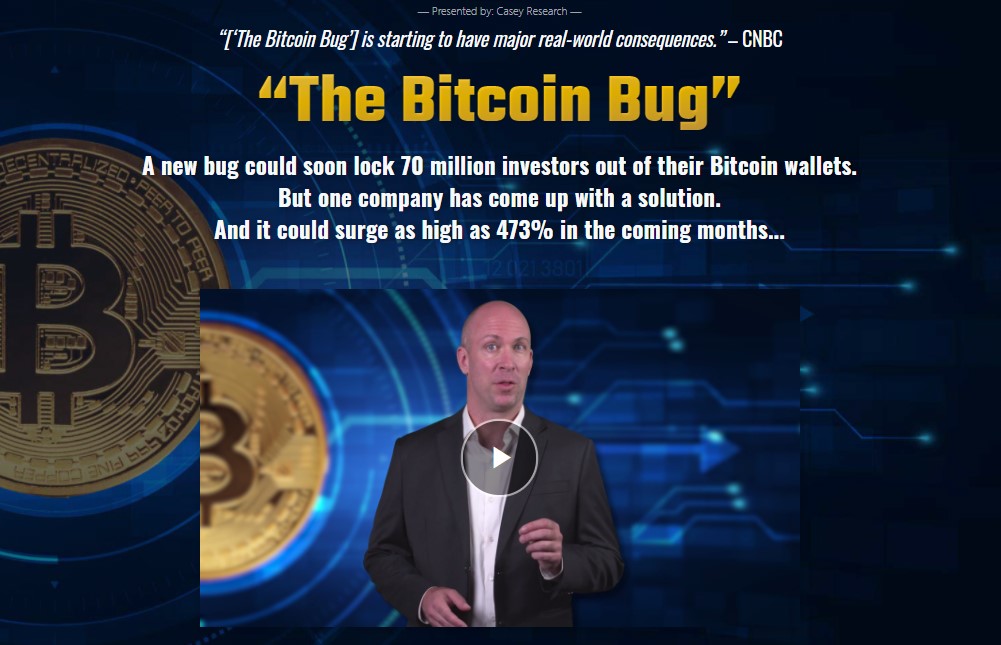 “No, I’m not talking about a server farm…

Or one of those massive Bitcoin mining rigs…

Or even any other crypto technology you’ve likely heard about.

This key technology is far bigger than that.

It’s essential to more than 400,000 Bitcoin transactions per day.

And its success will determine whether Bitcoin will thrive or falter in coming months.”

He calls it a “Bitcoin bug” and describes it as a point of weakness buried inside Bitcoin’s perfect code. He says that it threatens to bring all Bitcoin production to a halt.

So, what is he talking about?

Dave Forrest is talking about a shortage of computer chips on a global scale. He says that there is a massive demand for computer chips and Bitcoin is at the heart of it hence he calls it “The Bitcoin Bug.”

This reminds me of Jeff Brown’s recent presentation called The Tech Shock Portfolio where he was also talking about a global shortage in computer chips and why he thinks we ought to consider investing in computer chip companies.

Going back to Dave’s presentation, he compares it to the chip shortage that happened in the 1990s that he calls “the millennium bug,” something Jeff also mentioned.

Dave says that in the late nineties, a shortage of computer chips threatened to stall the internet revolution.

He says that this could happen again triggering a stock market crash.

How does a global chip shortage affect Bitcoin? Well, Dave explains that it has to do with the Bitcoin mining process that consumes an incredible amount of energy.

He says that the whole process relies on special “power chips” and without these, the whole process cannot happen. As a global chip shortage happens, he thinks Bitcoin will be heavily impacted because it desperately needs them for Bitcoin mining.

So, how does he want you to invest?

The Company To Fix The Bitcoin Bug

Dave Forest has identified one company that will manufacture the critical chip in every Bitcoin mining computer. This means that it will fix “the bitcoin bug.”

“Because this looming tech crisis has kicked off the kind of opportunity we haven’t seen in more than 20 years.

Quite simply, one U.S. firm has come up with a novel solution.

And if they’re successful, it could prove to be one of the most lucrative investments in the world.

“They make the critical technology that will be needed.

I call it the “Bitcoin Key.”

This could be one of the “surest” and most profitable investments in the world.”

It has developed a unique way to do make computer chips and Dave even shows us a picture of its patent: 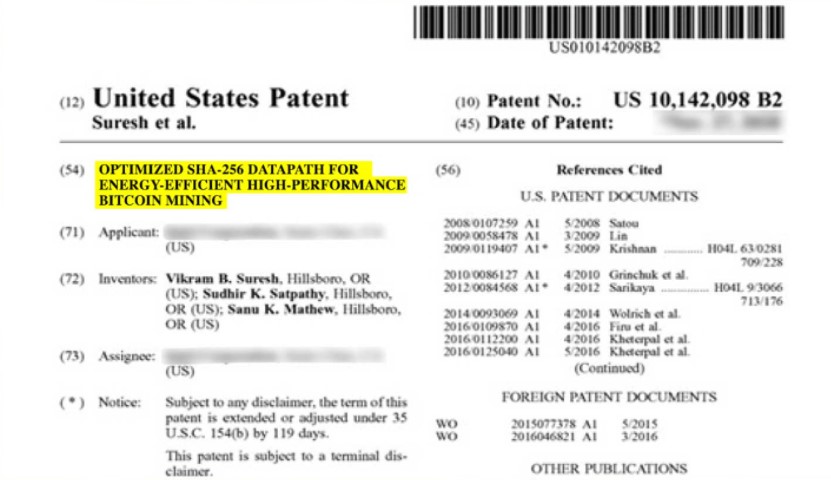 Dave Forest says, “the future of our entire tech-based economy hinges on this single type of chip owned by this company,” meaning that the stakes are high.

He has provided all the details regarding this company in a special report called The Bitcoin Bug: Your Chance to Profit From The Tech World’s Unseen Flaw. You can only get a copy of it if you subscribe to Dave Forest’s Strategic Investor newsletter. 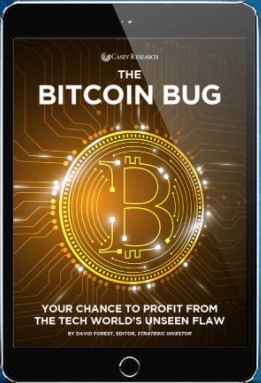 In the report, he explains how the company is making an important chip that is locked up in a patent. He also includes its name and ticker symbol.

Here are some clues that he provided about it:

The company’s biggest customers include Facebook, Google, and Amazon.

Plus, there is some speculation that Microsoft and Qualcomm could soon be this company’s customers.

These two tech giants spent over $25 billion on research and development last year.

So it’s no surprise this company’s annual revenue is estimated to hit over $72 billion.”

Unfortunately, those are not enough clues to decipher the name of this company so you may have to sign up for his newsletter to reveal the name of the company.

Dave Forest is the senior analyst for Casey Research, an independent publishing company that publishes financial research targeting retail investors. He joined the firm in 2004 when he started the Casey Energy Speculator Newsletter that focused on investment opportunities in natural gas, oil, uranium, and renewable energy.

Dave is a geologist who worked in the mining and petroleum industry for 20 years. He has founded mineral exploration and development companies and raised over $80 million in equity from some well-known resource investors.

He developed a 10-million-ounce gold deposit in Colombia and was the first to be granted a modern exploration license in Myanmar. He was the managing director of an advisory firm called Notela Resource Advisors that focused on global investment opportunities in the natural resource sector.

At Casey Research, he has been responsible for presentations like The 5G Keystone Stock and Warren Buffet’s #1 Private Investment.

Strategic Investor is a newsletter service that Dave Forest edits and publishes via Casey Research. He publishes his research via the newsletter.

You can get a free copy of the newsletter about the Bitcoin Bug as well as the following benefits:

In addition to that, you get the following special reports as a bonus:

In this report, Dave talks about software that will be crucial for the chip he was touting to work efficiently. He says that he has uncovered one company that has a “lock” on this critical software because no other company in the world can make the exact software. 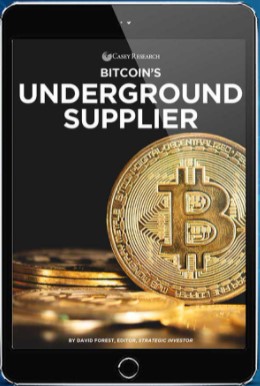 He says that over 4,000 cryptos depend on the software as well as emerging trends like IoT and electric vehicles.

Dave also says this about the company:

Already Apple, Samsung, Intel, HP, Huawei, and Tesla are customers of this firm.”

All the details are in the special report.

Dave Forest points out that 5G in its current form has a major flaw: You can only access the network when you are standing next to an antenna. 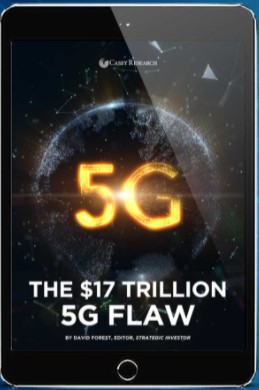 But he says that there is a tiny company developing “a new generation of components” that will power the 5G revolution and solve the flaw.

A one-year subscription to Strategic Investor costs $49, which is down from the usual $199 if you sign up via the link at the end of the presentation.

However, that price is just for the first year because, after that, you are charged $129 every year.

The Strategic Investor newsletter has a 60-day money-back guarantee. 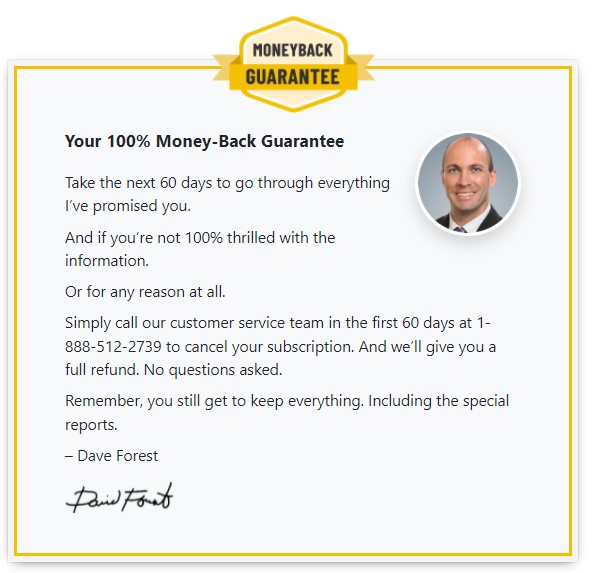 As you see there, you can cancel your membership within 60 days and ask for a full refund of your subscription. You get to keep everything including the special reports.

Dave Forest says that America has over 500,000 tech companies and the stock market is saturated with them now. Every tech company requires millions of chips and since there is such a large number of companies, the demand is huge.

He says that computer chips are the lifeblood that enables every tech company to function and, therefore, they are likely to invest as much money as required to get chips.

Meanwhile, the chip supply can’t keep up with the invention of new technologies and this creates a huge money-making opportunity. He says that the companies that supply computer chips will surge just as they’ve done in the past when there were technological inventions that created a demand for computer chips.

He says that the popularity of cryptocurrencies (led by Bitcoin) will create a huge demand for chips that will outstrip supply. To capitalize on this, he urges you to invest in companies that will be manufacturing those computer chips. He has his first choice pick and you can invest in it if you subscribe to his newsletter.

Unfortunately, I couldn’t decipher the name of the company he is recommending because he doesn’t give enough clues.