Shah Gilani’s presentation about “The Bidden-Harris Wealth Wipeout” has been getting a lot of attention, and for good reason.

Gilani believes that the Biden-Harris administration intends to impose a new tax and income redistribution policy that will take away people’s wealth in a money grab. At the same time, he claims to have found ways to help people survive the “wealth wipeout” and prosper.

I sat through the hour-long video and in this article, I will summarize everything Mr. Gilani talked about as well as reveal the names of the companies he teases.

What is The Biden-Harris Wealth Wipeout? (The Pitch)

The Bidden-Harris Wealth Wipeout is a presentation by Shah Gilani that starts with him warning us that the new administration intends to impose “the most expensive – and expansive – tax, spend, and income redistribution policies.” He even says that it is straight-up socialism. 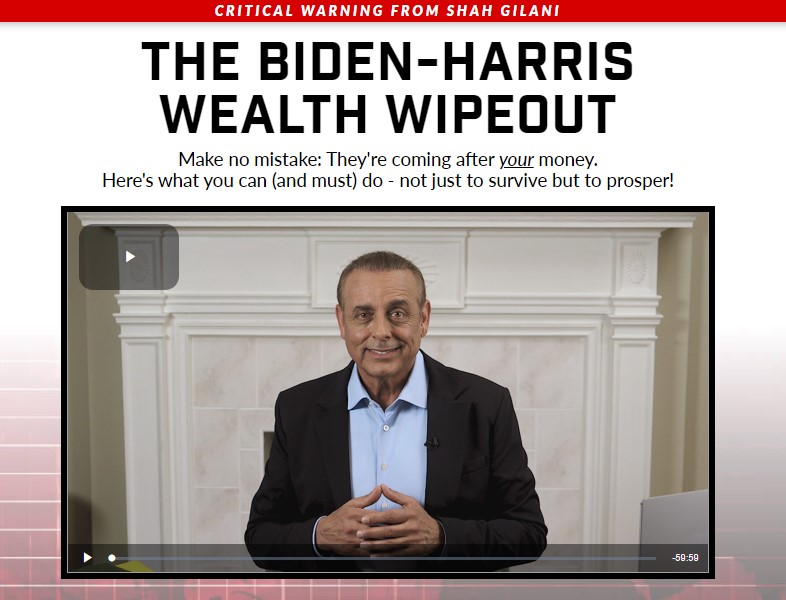 He believes that these policies will impact the free-market economy and your financial future and freedom. Therefore, he says that you need to protect your resources by shielding your assets against “skyrocketing taxes, a plunging economy, and crippling inflation” as well as preserve your income.

He has a list of stocks that he urges you to buy and those that he wants you to avoid or even sell (if you already own them). He lists them out in the “Buy This… Not That” format he used in the 2021 Investors Address presentation.

The stocks he recommends – the “buy this” list – are the ones he thinks are on the verge of exponential growth due to favorable economic and political shifts. They are still affordable, have “unbreakable competitive advantage,” are profitable with low or no debt, and are in large and growing markets. Some of them pay dividends.

The stocks on the “Not That” list are overvalued, have massive debt, and may have recently gone up in a “head-fake boost.”

He divided his picks into the sectors to which they belong, splitting them into “buy this” and “not that.” Here are the various sectors and the stocks that feature:

Gilani says that the Biden administration wants to gut the second amendment and take away people’s guns. Notwithstanding, gun and ammo sales keep skyrocketing each time the president makes a statement against guns.

According to him, the company to avoid is American Outdoor Brands (AOUT), which was formerly Smith & Wesson Brands Inc until 2016. He wants you to avoid it because despite it raking in millions in revenue, it barely ekes out a profit.

He wants you to invest in Sturm, Ruger & Company (RGR) because although it has lower revenue than Smith & Wesson, it nets a bigger profit and pays a dividend.

He teases a small ammo company that he describes as follows…

“They just announced in September that they have more than $80 million in backorders.

The company that fits that description is Ammo Incorporated (POWW). It is a leading designer, manufacturer, and marketer of ammunition.

In September 2020, its ammunition had such high demand that it was facing an $80 million backlog according to its CEO, Fred Wagenhals. He also said that they were running at full capacity 24/7.

He wants you to invest in a thin-film solar panel manufacturer called First Solar (FSLR), which he describes as “the gold standard for solar stocks.”

“And this company is a leader in helping trucking companies nationwide transition their fleets and their facilities from gasoline and diesel to natural gas.

It provides the technology and makes the components to convert gas and diesel trucks into natural gas burners.

In fact, it simplifies the entire process by providing truckers with the ignition control and electronic fuel injection fully integrated into one control unit.”

“You see, this little company, which just inked two new partnership deals with two of the biggest oil companies in the world for more than $165 million, manufactures the first commercially available RNG in the U.S., and it’s the largest supplier of RNG in the U.S. and Canada.”

The company he is talking about is Clean Energy Fuels Corp (CLNE). It is a renewable energy company that focuses on the procurement and distribution of renewable energy gas and conventional natural gas for the US and Canadian markets. It supplies RNG to customers in heavy and medium-duty commercial transportation. It has partnered with BP and Total, two of the biggest oil companies in the world to supply RNG.

Gilani believes that the government wants to exert control over the cryptocurrency market by creating strict regulations to govern cryptos. Therefore, he warns that investing in cryptos is not going to be the best way to allocate your money.

In the global payments sector, he recommends Western Union (WU) because as Biden’s less stringent immigration policies allow illegal immigrants to enter the country, more money will be sent by them back home. With more remittances, the company will make more money, some of which will be dividend payments.

“It’s relatively small with a market capitalization of $1.59 billion.

But its profit margins are huge, at just a tad under 30%.

They’re in the money-moving and money-lending business serving individuals and small- to medium-sized businesses.

All of it through offices in the Cayman Islands, Bermuda, Switzerland, the Bahamas, Guernsey, and Jersey.

Starting to get it? Or do I need to spell OFFSHORE for you?

So much in fact, they’re able to pay a dividend that’s currently yielding 5.255%.

Holy cow, that’s fat and, yeah, rich. And even better, it pays that rich dividend on a 61% payout ratio no less.

A good candidate that fits the description is The Bank of N.T. Butterfield & Son Limited (NTB). It is a bank that is based in Bermuda. It has offices in all the other locations Gilani has listed as well as the UK and Singapore.

It offers specialized financial services like cash management, lending solutions for individual, business, and institutional clients, and wealth management (fiduciary services). It pays dividends and has more than doubled its value since April 2020.

Within the automation industry, he recommends Rockwell Automation, Teradyne Inc, and Zebra Technologies just as he did in the 2021 Investors Address presentation.

But in this one, he has another that he teases…

“This hard-hitting robotics company helped clean up the Deepwater Horizon spill in the Gulf of Mexico.

Its robotics saved thousands of lives in areas of conflict and crisis around the globe, and it brought the first self-navigating, FDA-approved remote presence robots to hospitals.

And its stock is so undervalued… well, it’s a joke.”

The company he is referring to here is iRobot Corp (IRBT). iRobot Corporation is a company that designs and builds consumer robots. It was involved in clearing the Deepwater Horizon Spill because it provided an underwater autonomous robot to monitor the spill and provide crucial data that helped greatly. In 2013, it got FDA clearance for its autonomous telemedicine robot that allows remote doctor-to-patient consultations. The robot has an array of sensors that enable it to autonomously move around in a busy hospital without interfering with people and other objects.

He says that the digital distribution business is very profitable. He has a stock that he has identified within the industry…

“It is an international company that designs and manufactures automotive MEMS. Those are ‘microelectrical mechanical systems.’

And this company does it ALL.”

Many candidates fit the description and I could have gone with any out of a dozen or more. But I will go with a company called Analog Devices Inc. (ADI) because Shah once wrote about it in one of his articles on totalwealthresearch.com.

He couldn’t praise it enough, referring to it as “The Dividend Veteran” because it has a history of paying dividends. In the article, he lists a vast number of applications for its technologies and says that it has patents for its tech. Since he seems to like it, chances are, he is teasing it here too.

Who is Shah Gilani?

Shah Gilani is the chief investment strategist of Money Morning, which is part of Money Map Press.

He began his career running a hedge fund in 1982 while working at the Chicago Board of Options Exchange. He claims to have laid the foundation for what would later be known as the VIX – the most widely used volatility indicator.

When he left Chicago, he ran the futures and options division of Lloyd’s TSB. He then worked for a boutique firm called Roosevelt & Cross Inc. before founding his second hedge fund in 1999 and running it until 2003.

The Master Stock Investing Series comprises guidebooks that have recommendations and educational content straight from Gilani. You get all of these when you sign up for the Money Map Report newsletter. What is in the series?

The 2021 Financial Freedom Action Plan: It contains all the information Gilani shares in the presentation, including all his stock picks and the ones to avoid.

The Wall Street Insiders’ Tips and Tricks for Protecting Your Profits: In this guide, he shows you how to automate your trading. He shows you how to set up an automatic buying feature as well as stop-loss orders.

The Cash-Flow Expansion Plan: You learn how to invest in companies that will compound your dividends thus earning you more money than relying on low-paying dividends.

8 Cash Cows You’ll Want to Own Forever: This guide has the names of eight stocks that you can buy and hold for many years.

Speculator’s Guide: Emerging Moonshot Companies That Could 100X Your Money: This report has a list of stocks that have the biggest potential in the market but while also being some of the most speculative plays.

What is The Money Map Report? (The Newsletter)

The Money Map Report is an investment advisory service that Shah Gilani offers subscribers via the Money Map Press. When you become a member, you receive:

How much do you pay to join Money Map Report?

The Biden-Harris Wealth Wipeout is a presentation by Shah Gilani meant to popularize his newsletter called The Money Map Report. Besides promoting the newsletter, the premise of the presentation is to enable Gilani to talk about how he sees it best for you to invest your money in the stock market. He approaches this from the standpoint of how the Biden-Harris administration’s policies will affect various sectors.

He then has a list of companies he sees failing in the new dispensation and others that will thrive. He wants you to follow his advice to earn significant returns on your investments. It follows the format he used in the 2021 Investors Address.