Welcome to my review of Ray Blanco about a “Massive Disruption” or Apple’s Greatest Breakthrough Yet.

This presentation was about about the one of the most consequential revolution on the internet which he expects to happen on October 21.

This can potentially be the biggest global innovation since the iPhone. If you are would like to find out what this investment strategy is all about and whether it’s the real deal, then read  my detailed review below.

Introduction to the teaser about “Apple’s Greatest Breakthrough Yet”

Apple’s Greatest Breakthrough Yet’s introductory presentation reveals one of the biggest innovations of the 21st century. This massive event may change how we shop, travel, conduct business online, or how we interact with friends and family over the internet, according to Ray.

It all has to do with a top-secret Apple project that can deliver high-speed internet to a majority of the world’s population. This will be “the lifeblood of the new economy.” 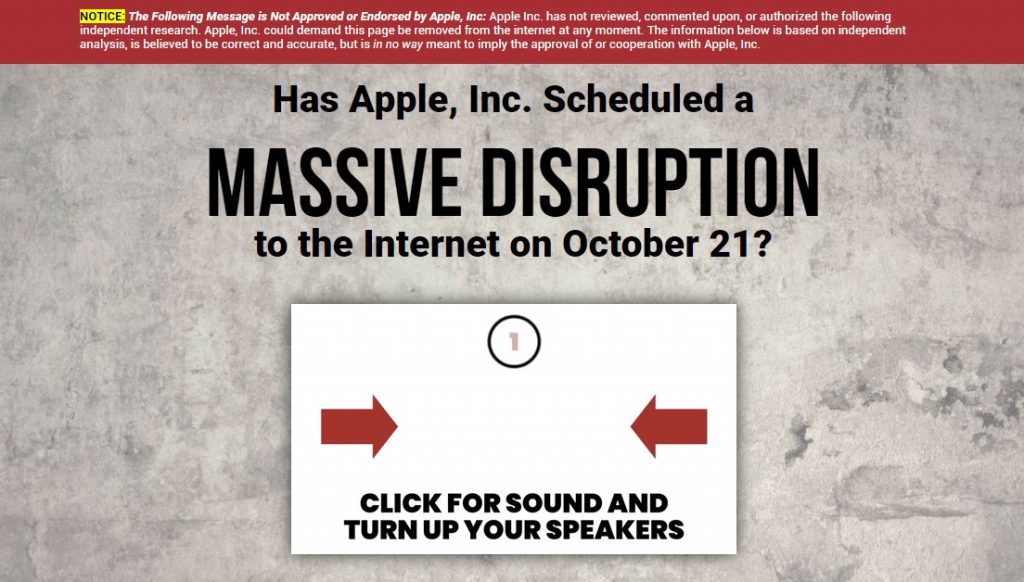 Ray Blanco feels it will have a bigger impact and be safer 5G. And at this point, you may be wondering what it is because up until now, most investment analysts have been hyping up 5G as the next big thing. For example, I have reviewed presentations like Dave Fessler’s 5G Contracts that have made it clear that it is the next big thing.

So, when a guy like Ray comes in and opposes them, he must have something up his sleeve.

He believes that Apple is planning to announce new way to offer its clients reliable internet access. It’s named Apple-Fi, and I have actually reviewed it before on this blog.

In the new arrangement, Apple will cut out traditional internet providers by offering you reliable internet access by the use of Low Earth Orbiting satellites. It is not a unique plan to Apple as other companies also have their versions of satellite constellations that will orbit near the planet and provide access to areas of the world that were previously unconnected. For example, Elon Musk’s SpaceX has a program called Starlink.

Note, Apple-Fi will cost you just $4.99 per month, which means that it will be the cheaper than what traditional ISPs like Verizon and AT&T charge you (around $132 or more per month).

Ray thinks that Apple-Fi will create a potential profit-making opportunity for you if you get in on it before the 21st of October.

Who the presentation about “Apple’s Greatest Breakthrough Yet”?

Ray Blanco is the Chief Technology Analyst at Seven Figure Publishing, an imprint of the Agora Financial. The Agora is part of the largest and most renowned independent financial research organizations in America. He has been in the industry for more than fifteen years.

Blanco’s main aim is to find out and track down the biggest new technology innovations of tomorrow. Every day he spends hours looking for promising companies that can reward early investors.

How can you invest in “Apple’s Greatest Breakthrough Yet”?

According to Ray, Apple is planning to launch between 1,400 and 3,000 satellites into space before 21st October. These satellites will be integral to deploying Apple-Fi.

The company will need to launch thousands of satellites into orbit for which it will require billions of dollars’ worth of rocket engines. A single rocket engine costs an estimated $2 million and there is one little known company that can supply these engines.

If Apple signs a deal with the tiny company, its revenue will go up by $6 billion and its share price may explode 250%, 500%, 1,000%, or even higher. Note, this company is a well-known leader in deploying and maintaining an extensive network of satellites.

At present, this tiny $500 million company has only 21 employees and you can reveal more details about it from a report called Apple’s Greatest Breakthrough Yet: Retire Rich On The “Apple-Fi” Revolution.

The report reveals other potential key partners in the project giving their name and ticker symbols. To get free access to the above-mentioned report, you must opt for Ray Blanco’s investment research service, Technology Profits Confidential.

Additionally, you are entitled to two more bonus reports:

I think Ray Blanco’s sentiments are based on a solid argument. When he first teased the idea of Apple launching a constellation of internet satellites in his Apple-Fi presentation, he claimed that this would spell an end to 5G, which at the time I thought was baseless — I still do.

In his latest pitch on the subject, I still think his argument makes sense (except the part about making 5G obsolete) because a Bloomberg article that was published in December 2019 talked about a secret plan by Apple to develop the constellation. They noted that Apple had started hiring people who were suited to such a project and when such a credible source says that, it has weight.

Will the project be launched on October 21st as Ray speculates? Probably not because there has been little indication of that happening (at least officially). Besides, Ray also set a deadline earlier in the year that didn’t materialize so there is a possibility that it won’t happen this time too.

Will Apple start offering satellite internet as Ray says they will? We’ll just have to wait and see. If you are rooting for the satellite company behind the internet project, you may have to wait for that project to materialize first. But since Apple has kept a tight lid on that particular project (if it even exists), you can only wait to see how that works out.

In the meantime, if you subscribe to Technology Profits Confidential with the hope of earning tons of money from his insights, you should realize that there are no guarantees when it comes to investing and speculating.

Don’t jump onto any profit opportunities until you are aware of the risks involved because you may lose money just as much as you can make it.