Is Apple Fi stock real and how can you invest in Apple Fi?

Apple Fi (the 5G Killer) is a presentation by Ray Blanco where he makes a couple of statements that may sound surprising.

Ray goes contrarian with this one because he goes against what almost every other analyst is doing right now: advising people to buy 5G stocks. He even remarks:

“Everywhere you go these days, you hear about 5G stocks… every analyst out there seems to be a self-proclaimed 5G expert, touting the ‘best 5G stocks for 2020…’”

But he isn’t just going against the grain for the sake of it; he believes that the ship has sailed on 5G investments.

In this article, I will dissect the presentation to give you the details of what Ray is proposing as an alternative to 5G investments.

What is Apple Fi Internet (The 5G Killer)?

I recently did a review of Ray Blanco’s presentation on Halo-Fi, which almost has a similar message with this one in the sense that both tout satellite internet constellations as the form of internet that will render other ISPs obsolete. 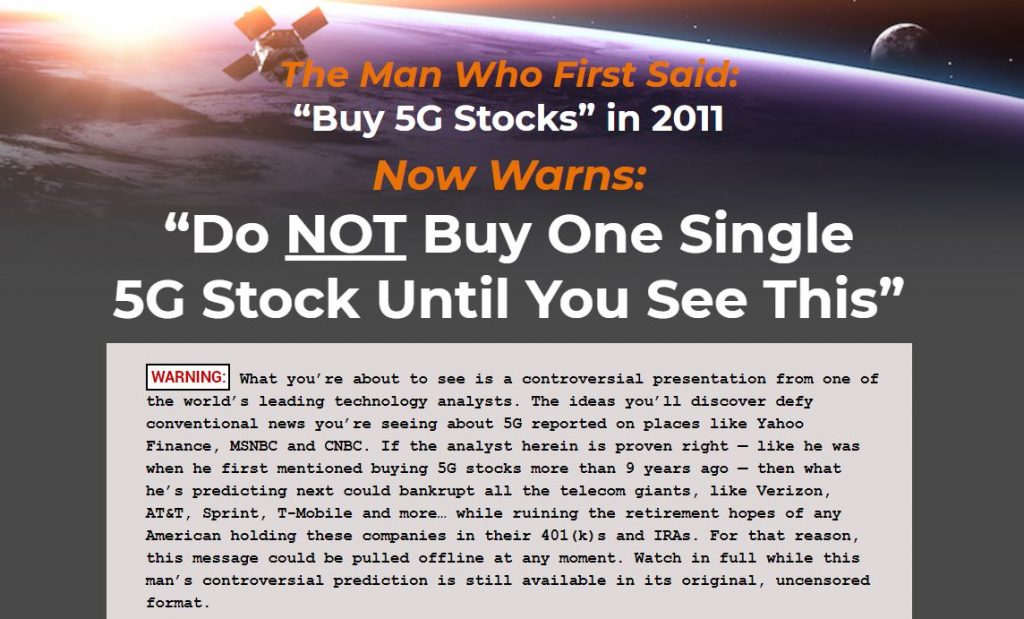 In the “Halo Fi” presentation, he was proposing that you invest in a company called OneWeb because it had already started launching satellites that would provide low-latency internet.

OneWeb declared bankruptcy in March 2020 and that appears to have prompted Ray to change his tune on the whole satellite internet constellations subject. However, rather than go with “more obvious” companies like Amazon, Amazon, and Facebook that are also sending LEO internet satellites he went with Apple.

In December 2019, Bloomberg ran a story about a secret initiative by Apple to hire new staff members that were rumored to be working on a satellite project to “beam data to devices” in five years.

Ray says this about the new form of the internet:

“In short, Apple will soon cut out traditional wireless networks and internet providers… And beam fast, reliable, unlimited internet through the air… directly to your device. No more cell towers… and no more routers. Instead, high-speed internet will simply be beamed straight to your device, at all times. Whether you’re walking down Fifth Avenue in Manhattan or in a remote rural cabin, you’ll always be connected to high-speed internet.”

He expects it to be super-fast and convenient because it will eliminate the need to have thousands of towers and routers, a problem that 5G is having in its planned rollout.

It will also eat into the revenue streams of network carriers like AT&T, Sprint, T-Mobile, and the rest of the 5G providers.

He expects it to be cheap too, costing just $4.99 per month.

In addition to that, Ray mentions that Apple has already started to secure its patent portfolio by filing patents for its satellite navigation.

He expects Tim Cook, the CEO, to use the annual Worldwide Developers Conference in June to “announce the rollout of ‘Apple Fi’ to the world.”

How to invest in “Apple Fi” Stocks

Although investing in Apple stock would be a straightforward move, Ray believes that such a move would take longer to generate massive returns.

Understand that Apple is a massive company worth $1.2 trillion and the likelihood of it doubling its market capitalization can take many years.

His solution is to invest in the smaller companies that have partnered with Apple to launch its satellite network. Small companies have historically had stronger returns on investment than large companies, albeit with greater risk.

So, here are some of the companies that Ray has earmarked for the “Apple Fi” project:

The first one is a California-based company with a market cap of $3 billion that manufactures rocket engines:

“NASA, Boeing… many big players rely on engines made by this company. And I’m confident that Apple will too.”

Its revenue will explode due to the business that the project will bring in.

The second company has a valuation of $500 million. It will also benefit from the new revenue stream it will receive from the project. Its role will be maintaining the satellites on orbit:

“With years of experience in this field, this little company is a leader in deploying and maintaining an extensive network of satellites. No other company in the world can do what they do — and I believe they’ll be a key partner in ‘Apple-Fi’.”

He has written a special report with details of both companies. It is titled Apple’s Greatest Breakthrough Yet: Retire Rich On The “Apple-Fi” Revolution.

Who Is Ray Blanco?

He spends most of his time tracking down new technological innovations to alert his readers about them early. The goal is to get them to position themselves in time for the capital gains that arise from those innovations.

He has been actively giving investment advice for more than 15 years.

What Is Technology Profits Confidential?

The presentation ultimately directs you to subscribe to Ray’s financial advisory service, Technology Profits Confidential. To get the special report, you must subscribe to the newsletter.

The subscription also comes with a 180-day money-back guarantee.

If you are itching to learn more about the “5G Killer” and decide to sign up for the newsletter, what will you be getting from your premium membership? Here are the benefits:

When OneWeb filed for bankruptcy, Ray realized that he had to change tact with his whole satellite internet story. However, he didn’t go with more “obvious” choices (companies that have already formally declared they are working on constellations) because that would not be interesting enough I suppose.

Apple is an interesting choice because it hasn’t made the project public. Therefore, there’s still that element of secrecy, which excites.

That being said, such a project would be very “Apple-like” because the tech giant doesn’t hesitate to do anything that can be done in-house if it can help it.

Ray hopes that that will be a good thing because if it turns out to be true and the project gets launched, you will be glad you heard about it and took concrete steps to cash in on it.

I don’t think “Apple Fi” will make 5G obsolete because these constellations are meant to beam 5G signals. However, it is not good news to network carriers and other ISPs because they will lose a lot of business.