A publishing firm called Angel Publishing recently put out a presentation by one of their analysts that was titled “Angel Investing Unlocked.”

Presented by Jason Williams, a former Morgan Stanley banker, the discussion centered on how anyone can invest in red-hot companies before they go public on the stock market thus earning outsized returns.

After going through the presentation, I decided to put this together to summarize the presentation hoping that by reading this, you will be better placed to decide what to make of Jason’s assertions.

What is Angel Investing Unlocked? (The Pitch) 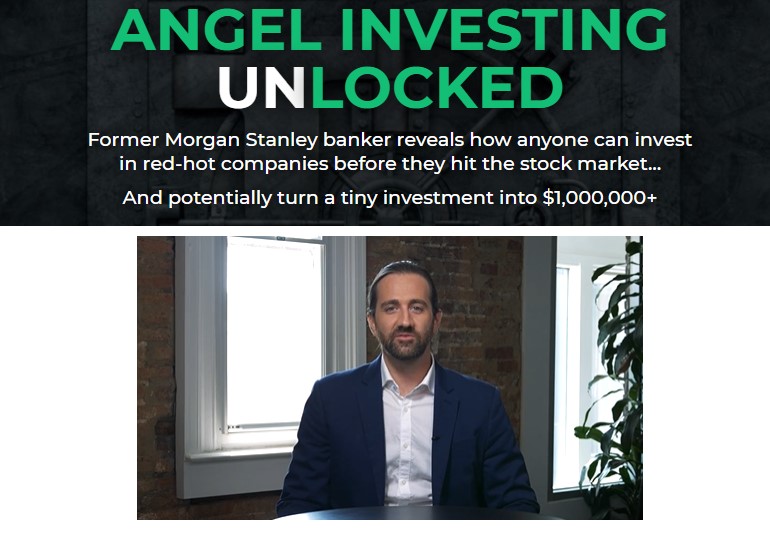 The concept of a pre-IPO is not unique to Jason as investment gurus like Jeff Brown and Teeka Tiwari have already done their versions of this.

Jason says that angel investing is the best way to have a shot at life-changing profits and that it is now accessible to almost everybody thanks to the new legislation:

“If you want a shot at life-changing profits…

Then you need to pay CLOSE attention.

Thanks to a landmark act of Congress, you can now access a “private market” that was previously off limits to regular Americans…

A market that hands out $214 billion a year in profits…

Is growing 10 times faster than the stock market…

And mints more millionaires than anything else in history.

The law is called HR 3606. It’s a ground-breaking piece of legislation that:

‘Makes it legal for all American citizens over the age of 18 to invest in high-growth startups before they go public.’”

He says that HR 3606 made it easier for people to invest in private companies because it has relaxed regulations surrounding private investing. H.R. 3606 is commonly known as the JOBS Act (Jumpstart our business startups Act). It has, among other things, made it easier for startups to acquire funding including through non-accredited investors.

When you invest in a private company, he says (and shares numerous examples) that when it goes public, you stand to make a lot of money. But he also says that it is not the only way you can profit from such deals. The other way you can make huge profits is if they get acquired privately, usually by another company.

Although he liberally uses the examples of household-name companies to exemplify how angel investing in them before they go public is lucrative, Jason says that his approach doesn’t necessarily lead him to them. Instead, he goes for “thousands of much smaller companies you’ve never heard of.”

How does Jason find his deals?

He says that he uses a proprietary trading system he calls “the TAB system.” It enables him to predict which angel investments have the potential for explosive growth. It is an acronym, where:

He says that to become a great angel investor, you need access to a steady flow of angel investments, which are difficult to find – or find those of good quality. But he says that he can help you with that because he has the experience, connections, and resources.

Therefore, he wants you to sign up for his new advisory service – Main Street Ventures – through which he will provide you with angel deals to invest.

Who is Jason Williams?

Jason Williams is a former Wall Street banker and leading angel investment professional. For decades, while he was working at Morgan Stanley, he was helping people make money as angel investors.

He says that he learned a great deal about the market while he was working there because he got to work for big clients and he witnessed as the bank held IPOs for companies like Snapchat, Facebook, and a couple of other billion-dollar companies.

He left Morgan Stanley and set up an office in Manhattan where he advised wealthy clients. He says that he used his connections to find the best deals for his portfolio and his clients. He then claims that he got wealthy off of that.

He later joined the newsletter publishing industry as a regular contributor to Wealth Daily. He co-authors The Wealth Advisory and recently founded Main Street Ventures, which is the subject of this presentation.

What is Main Street Ventures? (The Newsletter)

As I mentioned before, Main Street Ventures is an investment research service that Jason started to offer angel investment advice to retail investors. He says that he and his team are constantly combing through databases and regulatory filings to find investments that fit the TAB system.

Once they find deals that meet those requirements, they send them to you through a deal dispatch, which is just another way of referring to the digital messages that they send you. The message has the name and details of the company and instructions on how to invest.

On top of deal dispatches, members of the Main Street Ventures receive:

How much do you pay to join Main Street Ventures?

The service has a 6-month money-back guarantee.

Jason Williams says that you can make a lot of money by investing in the best companies before they go public. He says that by getting in Pre-IPO, you can make more money than the people who purchase shares on the open markets.

One thing that probably doesn’t get enough attention from the presentation is the fact that the chances of an early-stage company failing are high. Jason mentions that one winner can make up for hundreds of losers but doesn’t do enough to show how finding that one good company is tough. Therefore, if you are going to follow his advice, bear this in mind before you end up feeling frustrated when things fail to work out for you.