When retail traders willed each other in January to cause a short squeeze on GameStop, they set up a trend that Andrew Keene wants to exploit for gains.

He says that they created a new trend called The Super Squeeze that will enable options traders like him to play the biggest trades in the market.

He even decided to start offering a new advisory service based on this phenomenon. The advisory service is called Super Squeeze Profits and we will be taking a closer look at it in this article.

What is Super Squeeze Profits?

Super Squeeze Profits is a new advisory service that was recently launched by Andrew Keene. He will be heading it and it will be published by Money Map Press, an independent publisher of financial newsletters. Andrew will be recommending options trades to his readers. 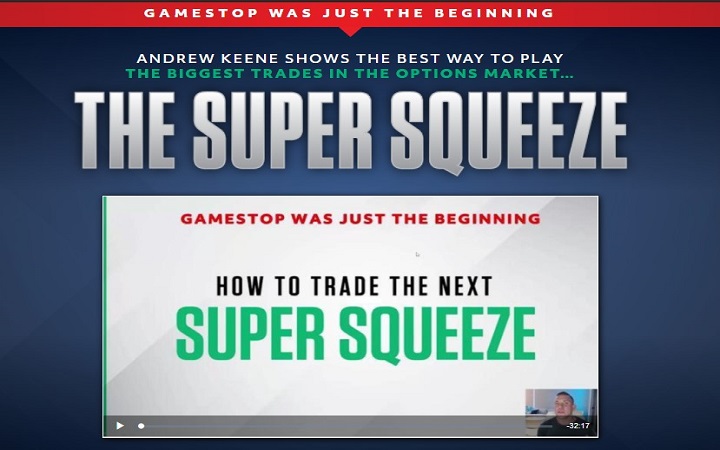 He pitched the service to explain what it will entail and the investment strategy on which it will be based. The presentation began with him talking about the short squeeze that occurred in January when a group of retail investors on a subreddit called r/WallStreetBets decided to short squeeze a couple of stocks to upset the powers that be on Wall Street. According to him, this trend is bound to keep happening…

“We saw a massive Super Squeeze so far in names such as GME, AMC, EXPR, and Bed Bath & Beyond.

But it is far from over.

They are going to keep targeting name after name after name, driving the hedge funds to lose billions of more dollars while the retail trader – for the first time in history – has a chance to level the playing field.”

If for some reason you haven’t caught up with that story, you can read all about it in this article. The long and short of it is that Andrew says that the markets used to be controlled by the hedge funds until recently when the “little traders” came together.

What is a short squeeze?

A short squeeze is a situation that occurs when an asset’s price goes up forcing traders who had shorted it to buy shares to cover their positions and avert further losses. When they scramble to buy the stocks, the demand surge (created by those traders) makes the price go up even more.

Why am I bringing this up?

Keene says that a new kind of trade has been created by the “GameStop trend” that he calls a “super squeeze.” He says that it is driven by hedge funds, retail traders, market makers, and unusual options activity. Here is how it works as he explains it:

The demand goes up creating a “super squeeze” where demand exceeds supply and the prices go through the roof as a result.

Super Squeeze Profits will be all about trying to make money off of these super squeeze trades.

This is where Andrew brings up S.C.A.N, a proprietary tool he uses to track options trading activity. He has featured it in other presentations like The 1450 Club and Super Options.

Keene says that he has a way of monitoring the third element (institutions joining the long side of the trade). Therefore, if he buys along with the institutions, he can make money on the trade.

So, how does S.C.A.N work? Here is his explanation:

“When the Super Squeeze appears, options can make big profits, but only if you know where to look, and S.C.A.N. does all the heavy lifting for you, spotting unusual options activity with ease.

We track all the order flow, retail and institutional, looking for big moves. S.C.A.N. reveals when massive trades are being executed. We can find these Super Squeeze trades in real time.”

This informs his moves and recommendations and that’s what the new service will be all about.

Who is Andrew Keene?

Andrew Keene is a professional trader who has been at it for the past 18 years, 10 of which he used to work on the trading floor at the CBOE. Before he started trading, he worked as a bank analyst, a job from which he was fired for falling asleep on the clock.

After losing his job, he accepted a clerk’s job at the CBOE to learn how to trade. He was promoted to floor trader. He left his job and started trading alone. He then started writing newsletters.

Andrew has been featured on outlets like CNBC, Bloomberg, WCIU, BNN Canada, Sky Australia, The Street.com, and Forbes just to name a few.

What do you get when you join Super Squeeze Profits?

When you become a member of Super Squeeze Profits, you receive:

How much do you pay to join Super Squeeze Profits?

There are no refunds.

Super Squeeze Profits doesn’t feel that much different from all the other options-based newsletters that are offered by other Gurus except for the fact that Andrew started it after the GameStop controversy. That doesn’t mean it is a bad newsletter.

Trading options is often touted as the best way to use leverage to make more money but that doesn’t mean that there is no risk involved. Andrew Keene admits that although the upside potential is huge it is all very risky. To quote him:

“We’re going for very big wins here. The reward potential is high – so is the risk. Only 10% or 20% of these trades might be winners.

Losses will absolutely happen. These are the trades you play with a little extra money you can risk.

Therefore, he is effectively telling you to have a solid strategy first then use his service to play around with the change to see if you’ll strike gold.