America’s Last Digital Leap by Jeff Brown concerns an industry that will go digital and create wealth for investors.

In this article, we will tease out what Jeff means by that as well as uncover the industry he is talking about that may leap to $11.9 trillion in value.

By the end of this, you should be in a position to form an opinion on whether Jeff’s propositions are worth your while.

What is Jeff Brown America’s Last Digital Leap? (The Pitch) 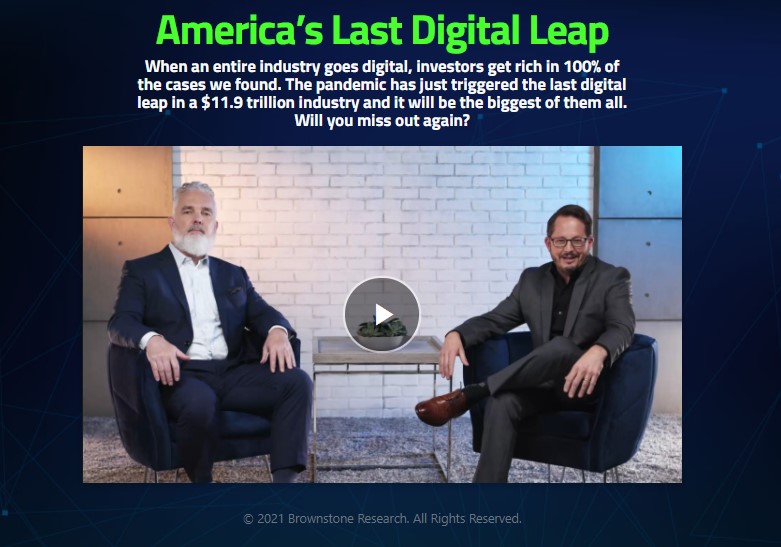 He has been relatively active of late, releasing other presentations like The Apple Super Cycle and Pre-IPO Code.

Going back to the presentation at hand, Pandemic Unleashes America’s Last Digital Leap concerns an $11.9 trillion industry that is about to be digitized, thanks in part to the pandemic.

Before we even go further, I would like to reveal that the industry he is talking about is Healthcare.

Jeff tells us that whenever an industry switches from analog to digital, some companies benefit and their stock prices soar. He gives examples of industries like auto dealers, movie shops, music, education, and travel that have witnessed a digital leap and resulted in some of the companies involved growing exponentially.

He expects the digitization of the Healthcare industry to be impactful, given its size. As Jeff puts it:

“Because it’s happening in an industry that literally serves over 3.8 billion people.

Billion with a B.

That’s a lot, a lot of customers…

In fact, if you look at iPhone owners…

That’s 5 times more customers than Apple has in the entire world.

It’s going to be massive.

Jason, I guarantee this digital leap will personally affect you, me, and everyone watching this summit.

We’re talking about an industry projected to reach $11.9 trillion in the next couple of years.”

Why now? Why hasn’t healthcare already been “digitized”? Jeff blames government bureaucracy and says that for decades, red tape has been preventing this from happening.

But then the pandemic came in and forced its hand:

“Well, there were a lot of barriers preventing this digital leap from happening…

But those barriers collapsed when President Trump declared a national state of emergency after the COVID-19 outbreak hit the U.S.”

So, you must be wondering, what does Jeff mean by healthcare being digitized?

The digital leap he is talking about the adoption of gene-editing technology as a viable form of treatment. He says that the ability to edit our genes can enable us to cure more than 600 genetic diseases. In the presentation, he says:

“This tech has the potential to cure every single human disease caused by genetic mutations.

And there are more than 6,000 known genetic diseases that have no cure or therapy today… Including cancer.”

He then explains how great this technology will be, saying:

“Soon, doctors will be able to develop tailor-made solutions for every patient, according to their specific genes.

It’s something I call ‘precision medicine.’”

Jeff has researched the market and decided to invest in one tiny company that he thinks has great prospects:

“I found a tiny company in the middle of it all.

Normally only venture capitalists would know about this opportunity.

But today I’ll show you how everyday folks can get into this deal.

The only catch here is that you need to act fast…

Because this company is set to make a key announcement as early as tomorrow.

This has been confirmed by insiders. I’ll even show you documents in just a moment.

Once they publish a press release, it will be too late.

By the time you see the headlines in major newspapers, shares could be trading much, much higher.”

Speaking of its tech:

“They’ve developed a new technique for genetic editing that allows them to fix those typos outside the body.”

He says that it went public earlier in the year (2020) and shares had already doubled: 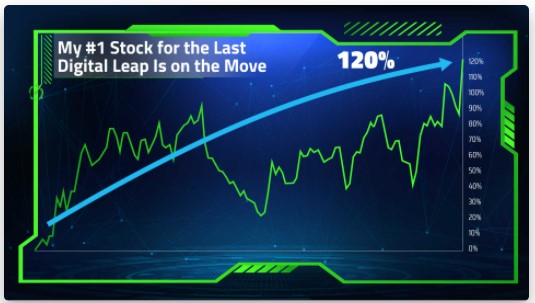 It is about to start delivering its drug in 2021 as per its SEC filing:

“It says right there in plain English that the company is preparing for ‘an initial wave of Investigational New Drug (IND) applications beginning in 2021.’”

Jeff thinks that this is big news because companies usually file such applications when they are about to move into human testing.

This is not the first time that Jeff is teasing a company that is in the gene-editing business. He once teased a biotech company called Illumina (ILMN) in a pitch titled Tech Melt (The Second Wave).

I think the company he is teasing could be Kronos Bio Inc (KRON).

Kronos is a biotech company based in California. It describes itself as follows:

“We are a clinical-stage biopharmaceutical company dedicated to the discovery and development of novel cancer therapeutics designed to transform patient outcomes by targeting dysregulated transcription.”

I won’t get into the science of their therapeutics but there is an element of genetics to it. They try to identify the gene expression signatures behind cancer.

At the beginning of December, it announced FDA clearance of IND application for an oral inhibitor.

When it went public in October, shares were selling at $19 and towards the end of November, the price had reached $38.

He has written a dossier called How to 10X Your Money in America’s Last Digital Leap. In it, you can find the details regarding the company he is teasing. The caveat is that you can only gain access to it if you are a member of Exponential Tech Investor, which we will be taking a closer look at in a bit.

Jeff Brown is an investment analyst and professional trader with 25 years of experience as a high-technology executive. He is also the founder of Brownstone Research, a boutique investment research firm that publishes financial advisory services like Exponential Tech Investor, the Near Future Report, and Early Stage Trader.

Owing to his experience working in tech, he is quite adept at finding tech startups that are well-positioned to grow into big companies. He attributes his success as an angel investor to the access to information he has – information that the public never sees. He claims that he sees trends months if not years before the other investors are aware of them.

He was born and raised in America but spent the majority of his professional life living and working in international markets.

What is Exponential Tech Investor? (The Newsletter)

Exponential Tech Investor is one of the premium research services that Jeff offers through Brownstone Research.

He says that what distinguishes it from the other services he offers is that with it, he targets small early-stage companies that have the potential to earn exponential returns. These are companies that most people are unaware of.

Here is what you get when you join Exponential Tech Investor:

If you subscribe to the advisory service via the presentation, you also receive two free research reports namely How to 5X Your Money in the Booming Cloud Industry and Jeff’s Deal Diary: The Top IPOs of 2021.

How much do you pay to join Exponential Tech Investor?

A one-year subscription to the newsletter costs $2,000.

The subscription fee is NON REFUNDABLE.

However, you have 90 days to cancel your membership to receive a credit equivalent to the subscription fee that you can use to sign up for any product published by Brownstone Research or its partners: 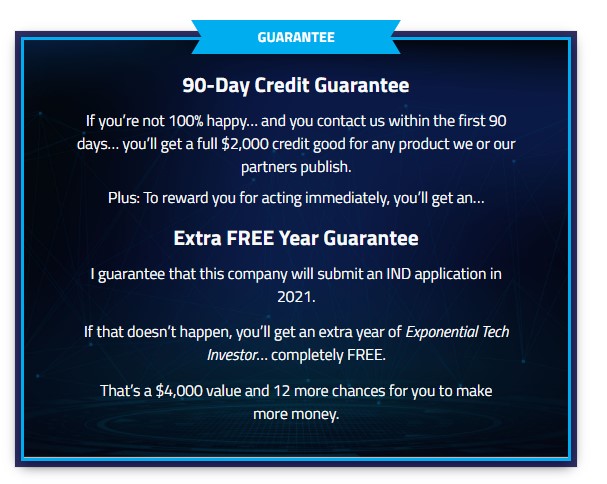 If there’s anything you should take away from America’s Last Digital Leap (besides signing up for the Exponential Tech Investor) is the fact that Jeff Brown thinks that the healthcare industry is due to be digitized. By this he doesn’t mean the switch from paper to electronic records or telehealth (consulting a doctor over a call); he is talking about gene-editing technology.

He says that gene-editing technology is effective against many diseases and that it may change the healthcare industry for the better.

He believes that there is an investment opportunity if you can find the right company; as he has. After analyzing the clues, I guess he teasing Kronos Bio (KRON), a California-based biotech company working on Cancer therapeutics. If you’d like to definitively find out what company he is teasing, you have to sign up for his $2,000/yr (non-refundable) newsletter.