Among other things, he issues a warning that we are headed for a big wealth redistribution that will make the middle class and the poor poorer and the rich even richer.

In this article, I will highlight the main points he raised during his pitch and reveal what that whole “wealth transfer” process is.

What is America’s Final Wealth Transfer? (The Pitch)

Robert Kiyosaki starts the presentation by talking of a wealth transfer that will be instigated by “a powerful group of unelected officials that operate in secrecy in Washington, D.C.” (he is referring to the Federal Reserve). 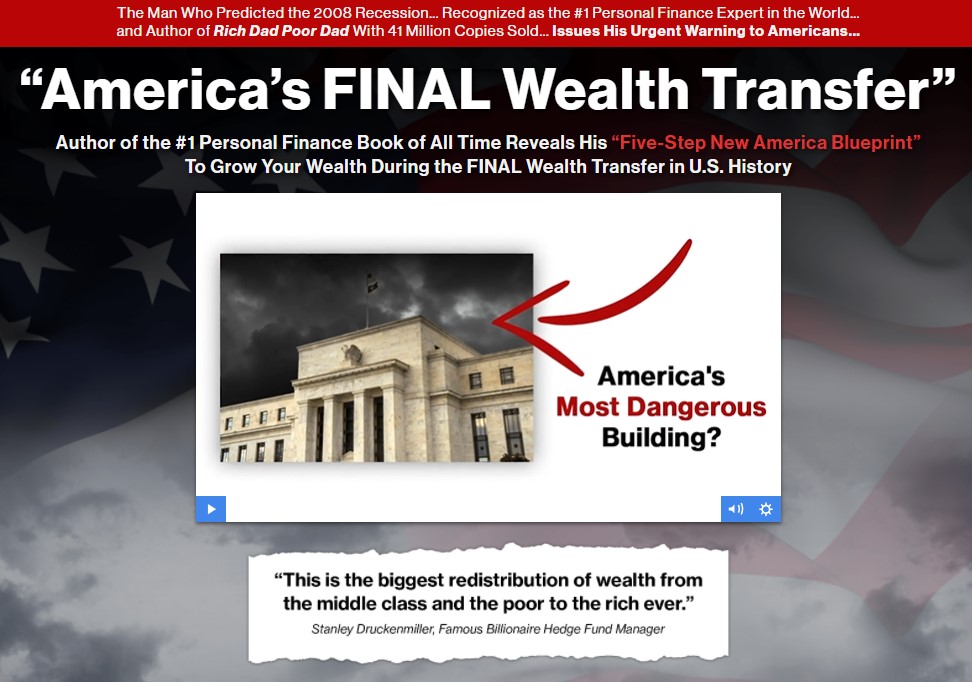 While talking about the origins of the Fed, he refers to them as rich men who met and formed a “privately-owned central bank” that they then tricked people into believing is a public institution.

Don’t believe me, here is an excerpt from the pitch:

“They even call themselves a ‘federal bank’ to trick Americans into thinking this was part of the U.S. government.

Flash forward to the present, he claims that a decision they made on March 23, 2020, at 8 AM will take away wealth from the poor and the middle class and give it to the rich. He says that the Federal Reserve wants to run a secret campaign to “steal” from the middle class.

Here is an excerpt:

“Their actions are nothing more than…

And now that they made this drastic and unprecedented decision on March 23, 2020…

The final blow that will divide America into haves and have-nots… once and for all.

Kiyosaki says that over the years, the Fed has been using monetary policy to rescue rich Wall Street investors while neglecting the rest of the country especially during recessions and market contractions.

He cites examples like “Black Monday” in 1987 and the stock market crash of 2001 as incidences when the Fed “helped out the rich.”

But, he claims that what is about to happen could be even worse for average Americans because it will “end the middle class as we know it.”

So, what is he referring to?

The decision made by the fed that will instigate a massive wealth transfer is the infinite printing of money. In his own words:

“The Fed made a drastic decision.

On that day, they revealed in a public statement…

They were officially “going nuclear” with infinite printing of money.”

To justify his stance, he tells us that the newly printed money is benefiting a certain group of assets that have made rich individuals even richer while the economy is in freefall. This isn’t news because there is an obvious disparity between the stock market and the economy.

Who is Robert Kiyosaki?

Robert Kiyosaki is an investment analyst and real estate investor.

He is the author of a bestselling personal finance book called Rich Dad Poor Dad that has so far sold more than 41 million copies worldwide and been translated to over 51 different languages.

In addition to his bestseller, he is the author of more than 26 books, usually about personal finance and investing in the real estate market. His main earnings come from the seminars he hosts riding on the popularity of the Rich Dad Franchise.

He is the founder of Rich Global LLC, an education company that showed ordinary people how to take control of their freedom by reigning in on their finances. It filed for bankruptcy in 2011.

Robert’s main teachings emphasize the importance of generating passive income rather than relying on a paycheck. He also discourages people from going to college, claiming it is a waste of time and that they should start a business instead.

If you are in the middle class and wouldn’t like to have your wealth “taken away” he has a solution: Invest in the assets favored by the rich that are gaining value due to the Fed’s actions.

He has a five-step plan to help you with this:

First Step: “Own the #1 Disruption Currency of the Future”

He wants you to start investing in cryptocurrencies. Now, he is not the first financial guru to propose it because we’ve seen this in recent presentations like Ultimate Crypto by Matt McCall and “Largest Economic Shift in Society” by Tom Gentile.

Kiyosaki believes that the rich are investing heavily in bitcoin and he gives a few examples of this. He has also written a report about this titled The #1 Disruption Currency of the Future.

In it, he talks about investing in other cryptocurrencies (technically referred to as altcoins) that are cheaper than Bitcoin but that could ride the “crypto boom.” He has written about them in another report titled The Three Tiny Digital Currencies To Surge in 2020.

By this, he means that you should invest in gold. Gold has gone up significantly in 2020 and many gurus agree that it is one asset you cannot afford to miss out on. Case in point, Eric Fry during his 50X Gold Bull Market pitch and EB Tucker when he was talking about gold warrants in his Gold Placements presentation.

He has written a report titled The #1 Physical Asset in the Power Position for 2020 in which he gives his perspective on how best to invest in the precious metal.

He also wants you to invest in silver. He has written a report about this titled The Most Undervalued Asset of 2020.

Kiyosaki tells us that mining stocks have been historically proven to hold out well during tough economic times. Therefore, he has identified one gold mining stock that he is referring to as “the #1 mining stock for 2020.”

He has written a report titled The #1 Gold Stock for 2020 where he details the stock he is on to.

He has written about it in a report titled The #1 Crash-Proof Income Investment of 2020.

Fifth Step: “Hang Out With Rich People Like Me [Kiyosaki] and My Wealthy Friends”

This implicitly means that you should subscribe to his monthly research service, The Rich Dad Poor Dad Letter.

What is The Rich Dad Poor Dad Letter? (The Newsletter)

Robert Kiyosaki has been editing The Rich Dad Poor Dad, which he publishes via a firm called Paradigm Press (it is an imprint of Agora Financial).

If you sign up for it, you will receive:

How much do you pay to join Newsletter Name?

A one-year subscription to The Rich Dad Poor Dad Letter will cost you $49.

You have six months to try it out and if you cancel your membership within that period, you should receive a full refund.

After going through Robert Kiyosaki’s presentation on “America’s Final Wealth Transfer,” I can summarize it as follows:

I should mention that Mr. Kiyosaki is no stranger to whipping up people’s emotions by making bold contrarian statements (like his assertion that school is a waste of time or that the fed is orchestrating a grand plan to “steal” from the middle class and the poor).

Although it is a contentious way of doing things, it is his way of getting people’s attention and it seems to work for him.

That being said, before you buy anything from him or follow his advice, you should objectively analyze it.