In it, he predicts that the country will go through a “$7.4 trillion financial extinction event” on January 15, 2021, and as you’d expect, he has a series of simple steps you can implement to protect yourself.

So, today I will walk you through the presentation to point out the main points he raises so that you can judge whether you should take his message on board.

What is America’s Death Spiral? (The Pitch)

At the beginning of his pitch about America’s Death Spiral, Graham Summers warns that the country is headed towards a major catastrophic event on January 15, 2021. 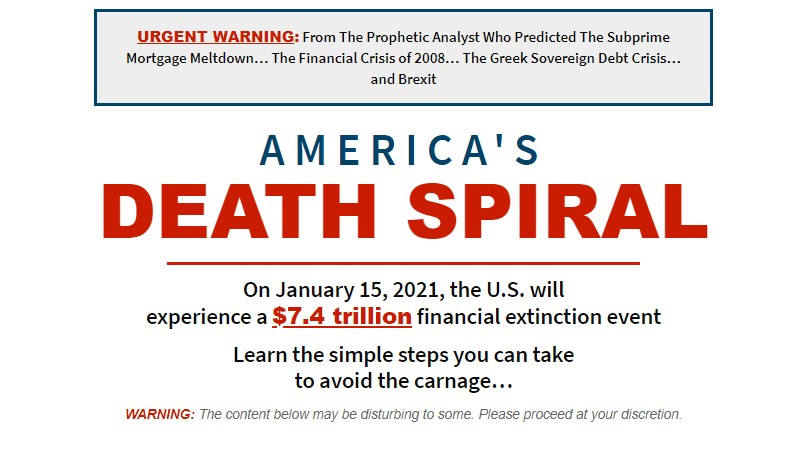 “And today, we’re barreling towards a $7.4 trillion financial extinction event on January 15, 2021, that no one sees coming…

In short, things are about to get much, much worse.

I’m talking about a massive wave of corporate, municipal and personal bankruptcies…

And unprecedented social unrest that will lead to martial law being imposed throughout the United States.”

He then laments about the poor being left in a worse off position while the rich end up doing well.

The Federal Reserve is to blame

He lays most of the blame on the Federal Reserve just like Robert Kiyosaki did in his recent presentation titled America’s Final Wealth Transfer.

“Since the financial crisis for 2008, the Federal Reserve and its accomplices in government have conducted a grand experiment on the American people.

They did it with our consent…

They claimed it was for our own good…

And you and I are witnessing the horrifying results play out on city streets and television screens across our country.”

He goes on a tirade about how the Fed usually implements monetary policies that favor the rich and hamstring Main Street.

For example, he talks of how the Fed cut interest rates to zero in the wake of the Financial Crisis in 2008, which reduced the cost of money for big Wall Street banks. It also bought trillions in Treasury and mortgage bonds and issued trillions of dollars to bail out banks and distressed corporations.

He then says that while this infusion of money was intended to spur the economy by enabling big banks to lend more to businesses and consumers, those banks kept most of it to themselves and even used it to take on more debt.

They also used it for “non-productive” purposes like stock buybacks and boosted the stock prices. The housing and stock markets went up benefiting mainly the rich.

Meanwhile, the economic growth did not match the stock market growth and it is the ordinary folk who suffered. Wages could no longer keep up with the prices of consumer items and people had to take on more debt (if not multiple jobs).

The value of people’s savings was also eroded.

How America’s Death Spiral will and is unfolding

Graham claims that the debt bubble that has been caused by low interest rates and “irresponsible” quantitative easing measures by the Fed only needed a catalyst to turn into a financial meltdown.

And that catalyst came in form of the coronavirus pandemic.

This led to what he refers to as the first stage of “America’s Death Spiral.”

The first stage of the death spiral was characterized by the economic meltdown that was caused by lockdown and the stock market crash that ensued when investors pulled out of the market.

The unemployment rate went through the roof and that led to a massive slowdown in retail spending. Along with reduced industrial output, this led to the largest decline in the GDP.

By this, Graham refers to the measures put in place by the government and the Fed to curtail the effects of the economic slowdown.

This is mostly the trillions of dollars in stimulus that they approved along with quantitative easing. He claims that these measures are not going to solve the economic crisis.

This will, in turn, lead to further unemployment and personal and corporate bankruptcies, which will push us closer to the “extinction event” he was alluding to (in January next year).

After that, Graham expects the banks to start to feel the effect of the bad debts since people and businesses will not fulfill their obligations.

And that’s where the January event comes in:

“And the brutal truth of it all will be revealed to the general public for the first time on January 15, 2021.

That’s when three of the largest banks, JP Morgan Chase, Citigroup, and Wells Fargo, all report earnings on the same day.”

When they reveal the extent to which the personal and corporate defaults will have affected the bottom line, he expects panic to set in just as it did in 2008 when Bear Stearns and Lehman Brothers revealed just how bad of a situation they were in.

He sees the stock market crash by up to 70% with pension funds, insurance companies, and mutual funds following suit thus affecting all Americans.

Next up, Graham paints a doomsday scenario that will follow the economic fallout in “Stage Three” above.

He sees poverty exploding due to joblessness and government tax revenues plummeting as incomes fall off a cliff. Welfare programs will see cutbacks and there will be social unrest.

Then the “catastrophe” will set in:

“As the financial contagion spreads, countries across the world would turn inward…

Decreeing draconian lockdowns to preserve resources and protect their own supply-chains.

Bank losses would be so big that policy makers would resort to depositor bail-ins (banks confiscate your account) and wealth taxes.”

He says that the Fed, in a desperate attempt to mend things, will print more money thus increasing inflation. Consequently, essential consumer goods will be out of reach for many people, and crime and desperation will ensue as people fight over limited resources.

Graham does pull back a bit by saying that things may not pan out exactly that way, but what I took from the presentation is that he sees a grim future for most people next year.

How to prepare for America’s Death Spiral

To survive the catastrophe that Graham believes we will witness, he promises to show us how to protect ourselves from ruin:

“Most important, I’ll show you some very simple ‘bulletproof’ strategies you can start using today to shield your family and assets from the coming chaos.

These are the same tried-and-true methods I’m using to protect my family.”

He claims to have come up with “bulletproof” ways of staving off the effects of the Death Spiral.

So, what are some of these strategies?

He has written a report with four asset protection strategies to mitigate the effects of an adverse financial climate. It is called Crash Proof: Four Invincible Asset-Protection Strategies for the Coming Collapse.

Here, we will go over the strategies he is talking about and try to make sense of what each of them entails.

Analysts like Eric Fry and EB Tucker appear to be agreeing with Graham that precious metals are going to be a reliable store of value during the pandemic. In his report, he delves into his way of approaching them.

He provides a list of risky banks that may not do so well in a crisis thus putting your savings at risk.

Strategy 3: The best stocks to own in the crisis

He says that he has a list of “crisis-proof stocks” to own during the meltdown.

Strategy 4: Getting rich during the collapse

He has a list of ETFs that he says can generate “life-changing” gains a few years down the line.

If you want a copy of the report, you have to subscribe to his newsletter, Strategic Impact.

Who is Graham Summers?

Graham Summers is the founder of Phoenix Press, which is an imprint of Three Founders Publishing, a firm that provides investment advice to retail investors – they both probably have links to The Agora since one of the founders is Bill Bonner (although I am not certain of this)

Graham is the chief market strategist of Phoenix Capital Research, another independent financial research firm based in Alexandria Virginia.

Over the past 15 years that he has been actively sharing his research with clients, he has made a name for himself as the guy who predicts big financial events like The Subprime Mortgage Crisis, The Greek Sovereign Debt Crisis, and Brexit, among others.

He is an MBA graduate and has been a C-Level executive for a significant chunk of his professional career.

As for his general investment strategy, here is how it is described in his bio on the Phoenix Capital Research website:

He has been featured on CNN Money, Fox Business, MoneyTalk Radio, and a few other mainstream media outlets.

What is Strategic Impact? (The Newsletter) 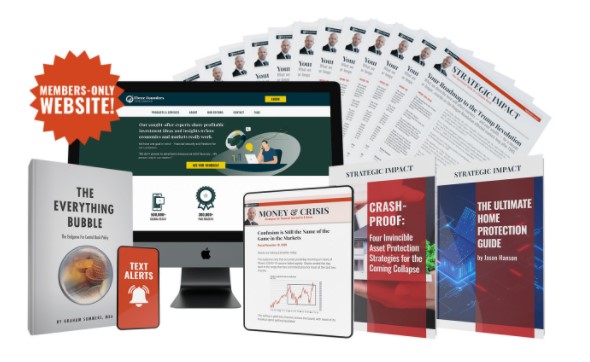 He sums up the kinds of opportunities he offers to his subscribers this way:

“Each month, I uncover little-known investment opportunities that are tied to massive shifts in the financial system…”

If you subscribe to the newsletter, in addition to the report, you will receive:

How much do you pay to join Strategic Impact?

You can ask for a refund within SIX MONTHS of joining.

After sitting through Graham Summers’ presentation on America’s Death Spiral, the main takeaway from it is that he expects the next year to be a terrible one financially. He is not convinced that the measures put in place by the government and the Fed will fend off economic collapse – he calls it a “catastrophe.”

He draws parallels between the events of the 2008 Global Financial Crisis and what he sees as a looming financial disaster before going even darker with predictions of social unrest. He even promises to provide you with a guide to dealing with “looters or a mob of protesters” arriving at your doorstep.

If you want his help preparing for these events, you have to subscribe to his newsletter, Strategic Impact, for as low as $49 per year.

Now that’s quite a way to market a newsletter but, if you’ve been around the newsletter circles, it is not uncommon.

If you intend to sign up for it, do more research to ascertain that you know what you are getting yourself into.