The America 2.0 presentation was released before the coronavirus pandemic reached American shores.

During the presentation, Paul Mampilly expressed optimism that the economy was on the cusp of exponential growth that would propel it to record highs.

The headline of the presentation was:

“Citizens from every edge of our great nation — from farmers to doctors and from 10-year olds to 100-year olds — will reap the benefits. And that’s just the start.”

It set the tone of the presentation as Paul spent most of it talking about a booming economy that would benefit those who positioned themselves to make money off of it.

In this article, I will give you an outline of the key points he made in the presentation. Keep reading to learn more about “America 2.0.”

America 2.0 by Paul Mampilly is an ad for his Profits Unlimited investment advisory service.

Although he released it before the coronavirus pandemic hit the US, he was confident that we would avoid a global recession, the DJIA would reach 100,000, and the real estate market would double. 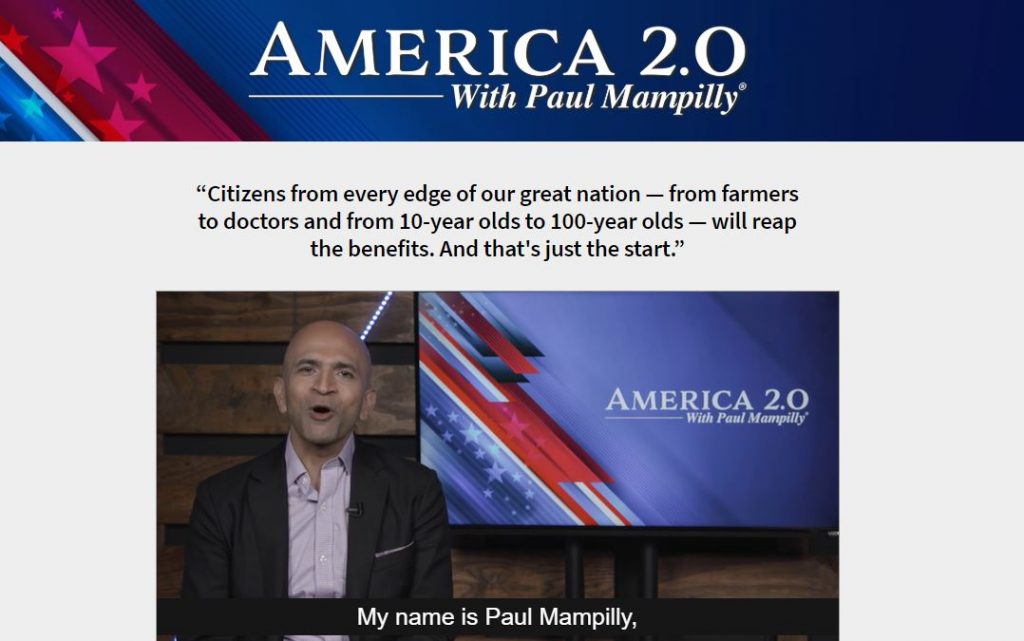 He identified a small company that would be well-positioned to benefit from the roaring economy. Here is what he said about it:

“It’s a little-known company that isn’t just positioned to profit from America 2.0 … it will be essential to building America 2.0.”

Then he went on:

“It’s a relatively small company based in South Carolina … valued at just $1 billion… But, it’s disrupting a $2.2 trillion industry… manufacturing.”

He specified what part of manufacturing the company was to take part in:

“This company is disrupting the auto industry … making better cars, faster. Housing is becoming cheaper. Even the health care industry is seeing massive advancements. It already employs 2,000 hardworking Americans who are churning out almost $700 million in annual sales.”

As he was releasing the presentation, shares were selling for $10 and he said that he was expecting them to increase rapidly due to a favorable economic climate. He said:

Who Is Paul Mampilly?

Paul Mampilly is one of the investment experts at Banyan Hill Publishing.

He is the editor of a couple of newsletters on the platform, including IPO Speculator, Extreme Fortunes, True Momentum, The $10 Million Portfolio, Rebound Profit Trader, and Rapid Profit Trader.

He has been involved with the financial services industry for more than 25 years.

Other experts I’ve recently shared reviews of include Jeff Brown and George Gilder.

He entered the scene when he relocated from India to the USA. He started his career as an assistant portfolio manager at Bankers Trust.

He became a hedge fund manager and was in charge of assets worth up to $6 billion at one point. His work as a money manager earned him a feature on Barron’s where his hedge fund was lauded as one of the leading funds in the world.

His investment approach is all about him researching to find ways of profiting from megatrends. He typically shares his findings with his followers (subscribers).

What Is Profits Unlimited?

As I already mentioned, the main reason Paul Mampilly made the America 2.0 presentation was to advertise his Profits Unlimited newsletter.

The newsletter is published by Banyan Hill Publishing.

Before I reveal the benefits of the newsletter subscription, I should clarify that he has published a book called Profits Unlimited: A Wall Street Insider Reveals the Secret to Life-Changing Wealth.

I am bringing this up so that you don’t confuse the book and the newsletter because they share the same name.

Going back to the presentation and the newsletter, by the end of the presentation, he provides you with a special report detailing the investment opportunity at hand. The report is called My No. 1 Stock Pick.

The annual subscription costs $47, a markdown from the normal $199.

Paul Mampilly released the “America 2.0” presentation before the coronavirus pandemic caused a global economic shutdown that sparked a record-breaking sell-off in the stock market.

He had predicted that the DJIA would reach 100,000 and the real estate market would double. Amid all the growth, a $10 stock, his number one stock pick, would rise exponentially and yield massive returns.

The presentation remains unchanged even after the pandemic and we are yet to see how his recommendation fares post-pandemic.

He may end up being right about the stock market because it may recover after the economy reopens fully and we witness a historic rally. It’s probably why he has stuck with his recommendation.

As for profits unlimited, you can give it a shot if you have $47 to spare and would like to see what Paul Mampilly is up to. Fortunately, there is a satisfaction guarantee in case you decide to cancel the subscription.