InvestorPlace has been promoting the Accelerated Wealth Summit over the past few days so I decided to take a closer look.

Hosted by Navellier, it is a webinar that he will use to talk about his proprietary stock research system that unearths the biggest winners before Wall Street.

If you are considering attending the webinar, read this article as I will be looking ahead at what we ought to expect from the event.

What is The Accelerated Wealth Summit?

The Accelerated Wealth Summit is the latest online event to be hosted by Louis Navellier and, like other events he has hosted before, he keeps his cards close to the chest with this one because he doesn’t spill the beans regarding what the event will be about.

The webinar will happen on May 19th on Wednesday at 4 PM Eastern Time. 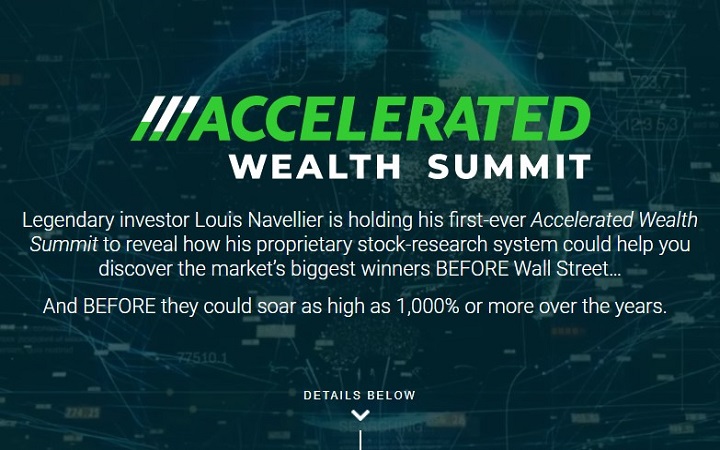 Earlier in the year, as he was promoting his Growth Investor newsletter, he released a video in which he warned his audience about a global phenomenon that was purportedly ripping the world and the stock market apart that he was calling The Technochasm.

In the Technochasm phenomenon, he was quoted as saying that a small group of people who know how things work was building wealth while other Americans were struggling to get by. Companies were growing faster than ever before while others were going under. And as the stock market continued to reach new highs, millions could, at the same time, be seeing their wealth erode.

So he says the premise of the Accelerated Wealth Summit is to help millions who are likely to be hit with a retirement crisis thrive in the current economic climate. And he’d do that by revealing how his proprietary stock picking system works. This is a system that he says has enabled him to uncover some of the biggest winners in history, including Amazon, Cisco, Apple, just to mention a few. And it is based on computer models.

Other things he is expected to cover at the event include:

Louis Navellier is a renowned growth investor with a rich history of involvement with the financial services industry. He has been providing investment advice to tens of thousands of investors for more than three decades and has earned the reputation of being a savvy stock picker.

In his 35-year career, he has made a name for himself as an outspoken financial newsletter editor. He started his most popular advisory service, Growth Investor, in 1998 and claims to have beaten the market by a margin of 3 to 1 over 17 years.

He also says that while he has been known to employ complex methodologies, his goal has always been to uncover Wall Street’s inconsistencies and help investors beat the market with less risk. His complex methodologies typically involve him designing computer-based systems to analyze the market, which explains why he considers himself a quantitative analyst (quant).

He is also a money manager and has a team of more than 50 analysts that oversee mutual funds and institutional accounts at his firm, Navellier & Associates.

How to attend The Accelerated Wealth Summit

To attend the Accelerated Wealth Summit as it happens, you have to register by providing your email address in a text box that looks like this on the landing page:

When you fill in your email address, Navellier will send you updates related to the event every day leading up to it. You can opt-out of these any time.

In addition to those updates, you will also be automatically subscribed to Louis Navellier’s Market360 Newsletter for free. You can also unsubscribe if you don’t fancy it.

The event is FREE of charge and you don’t have to be a subscriber to any of Navellier’s investment newsletters to be eligible to join.

If you cannot attend the event as it happens but would like to, don’t fret because Navellier and his team will release a recording of it and let you watch it for free.

He will also promote a newsletter as his way of letting you leverage his stock-picking system. The only thing we don’t know is which newsletter he will promote at the event.