I recently received an email from Larry Benedict’s The Opportunistic Trader inviting me to the 7 Day Blitz Summit.

In the invitation, Larry says that he has a “7-day blitz secret” that he wants to share with ordinary investors. The exact line from the presentation reads, “After managing almost $1 billion for his wealthy clients, legendary trader Larry Benedict is now ready to share his ‘7-day blitz secret’.”

I sat through the hour-long video seeking answers and put together this article sharing with you what I found out. It was interesting, to say the least.

What is the 7 Day Blitz Summit? (The Pitch)

The 7 Day Blitz Summit is an event that was hosted by John Burke. It provided Larry Benedict with the opportunity to promote his newsletter, The S&P Trader.

Larry says that “The 7 Day Blitz” is a week in which gains explode in a little-known corner of the market. Although the 7 Day Blitz happens near the end of the quarter, it has nothing to do with Earnings Season. 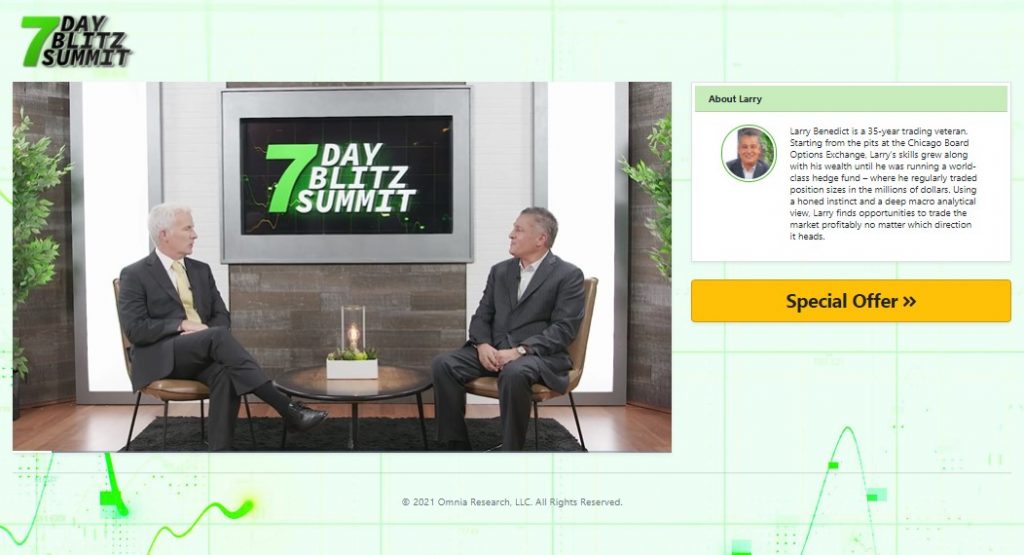 Larry says that it is guaranteed to happen because it is enforced by an organization regulated by the federal government. When it happens, up to a trillion dollars (or more) change hands. Here is an excerpt from the presentation explaining this:

“This phenomenon will be enforced by an organization that’s regulated by the federal government.

They say this MUST happen during the third week of March…

Which makes this whole thing 100% predictable.

We know with 100% certainty that a ton of money will exchange hands during this phenomenon.

Larry is estimating over $1.2 trillion.

And you just need to trade one ticker for the chance to grab some of that money.

But warning… this will be all over in just a few days.

This could be your LAST CHANCE to make tens of thousands in just one week.”

A few questions arise from this.

First, what is that one ticker Larry uses?

We also learn that the organization he was alluding to is the Options Clearing Corporation, which is regulated by the Federal government.

Another thing, what happens in that week if it has nothing to do with the earnings season?

He says that he was referring to Stock index futures, Stock index options, Stock options, and Single stock futures all expiring simultaneously and automatically within seven days. This creates the massive capital flow (the trillion dollars) that Larry takes advantage of with his trades.

In the presentation, he says that this is due to happen in the third week of March.

Larry demonstrates a proprietary system to see where the money is going in real-time. If money starts flowing into the SPX, his indicator shines green meaning that it is going higher and if it shines red, it means that the SPX will fall.

He says that he doesn’t read reports and clarifies that all he has to do is “read the tape.” By studying the price and volume, he can predict the direction of the market. He also looks out for big news that can move the market

If it isn’t already obvious, Larry uses options to make money whether the market is going up or down. It is a trope shared by other gurus who run options-based advisory services. Off the top of my head, I can think of Clint Lee (Flashpoint Fortunes) or Alan Knuckman (Big Option Trader) just to mention a few, who’ve talked like this.

On researching how he trades, I learned that he uses a vertical spread options strategy. By using a vertical spread it means that he buys and sells options of the same kind that expire at the same time but with different strike prices.

For example, when he recommends that you buy a call (put), he will at the same time ask you to sell another call (put) with the same expiration date but with a different strike price.

A vertical spread is great at limiting the risk, which is probably what Larry is aiming for with the strategy.

Who is Larry Benedict?

Larry Benedict is a former hedge fund manager who’s been trading for 35 years. He started trading at the Chicago Board Options Exchange where he says he learned how the market works.

When he was running a hedge fund between 1990 and 2010, Larry claims that he never had a losing year and that during the 2008 Global Financial Crisis, he and his partners had their best year, raking in $95 million. He says that Barron’s ranked his hedge fund in the top 100 hedge funds on three occasions.

With his experience and instinct, Larry claims that he can analyze macro trends in a way few other people can’t just by examining a chart. He claims that he can find opportunities to trade no matter which direction the market moves.

What is The S&P Trader? (The Newsletter)

The S&P Trader is one of two newsletters that Larry Benedict publishes at his firm. He says that this newsletter is the more advanced of the two.

He focuses on one ticker, The S&P 500 index (SPX), and trades using a vertical spread options strategy, which I have already elaborated.

When you become a subscriber, you can expect to receive:

How much do you pay to join The S&P Trader?

An annual subscription of The S&P Trader costs $2,000 (but you get two years if you join via the link in the presentation)

There are no cash refunds. Instead, if you cancel your subscription within 90 days of joining, they give you credit that you can spend on any product offered by Larry’s firm or its corporate partners.

The 7 Day Blitz Summit was Larry’s platform to promote his newsletter (The S&P Trader). In seeing the name of the advisory service, you’d naturally expect him to urge you to buy the index and hold but that’s not how he plays. He wants you to trade options and he gives you recommendations every week (I am not sure how this works because it seems like he is building up to one week).

By using a vertical spread options strategy, it means that Larry is keen on managing risks. The caveat is that he also limits the potential returns of the trades he recommends.

Before you join his newsletter, do more research into it because there has to be information that he hasn’t shared with us in his presentation that you could use to make an informed decision.