Looking for a review of a presentation titled 5G Volta by Energy & Capital’s Keith Kohl?

When Keith released his 5G Volta pitch, I was eager to see what it would be about because he is known for indulging in the oil industry; therefore, him talking about 5G was a bit of a surprise.

I analyzed the presentation and put together this article in which I highlight the main talking points so that you will be better positioned to decide what to make of his proposals.

What is 5G Volta (The Pitch)

Keith Kohl presents us with what he deems the biggest 5G opportunity yet that he distinguishes from the “standard 5G” (I have no idea what he means by that).

Now, if you’ve been following the markets, you’ve no doubt seen a couple of these stories play out over the past few months where an investment guru proposes “the biggest 5G opportunity that no one save for a few individuals is talking about.”

I have reviewed a couple of them here that I can think of including Trump’s 5G Lockdown (Louis Navellier) and 5G Contracts (David Fessler). 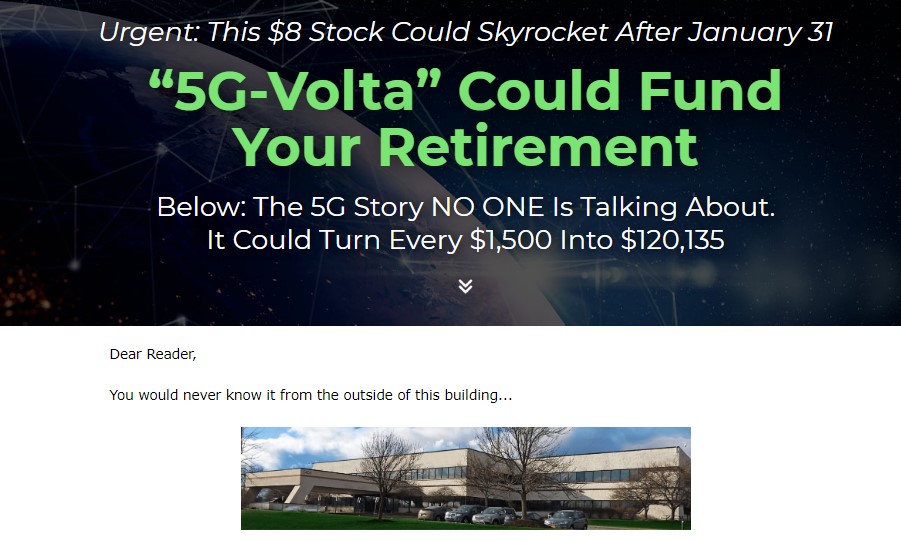 Going back to Keith’s presentation, he kicks things off by talking about tiny modules that will be a vital component for the 5G revolution. Here is how he describes them:

“But right now, a fleet of trucks is leaving this highly secure, nondescript warehouse in upstate New York.

Inside these trucks are tens of thousands of tiny modules.

Each one is tiny, no bigger than 10 grains of salt.

And this brand-new hardware is a vital component for the 5G revolution.

You’ve probably heard about 5G over and over. But what I’m about to share is the 5G story that hasn’t been told.

Because this is NOT about faster internet, better smartphones, or greater cell coverage.

It has NOTHING to do with the usual suspects such as Qualcomm, Apple, or T-Mobile.

This is about a government-mandated program I call 5G-Volta.”

Keith tells us that he has uncovered a government-run program that has been kept from the public and that is expected to have a valuation of $1.5 trillion. Those tiny modules will be at the heart of the program.

Those tiny modules are RF Filters.

He then says that they present us a chance to pocket four-digit gains in a few months.

He says that this is not an isolated case of a “little-known” company being the driving force of a dramatic tech revolution. He says that he has seen the pattern play out before and that investors have bagged three- and even four-digit gains.

How 5G-Volta came about and its expected impact

Keith says that it all began with an executive order that had bi-partisan support:

“You see, 5G-Volta was launched in May 2020. That’s when President Trump signed Executive Order 13920 with little fanfare.”

What of the impact on the technology industry? Here is what Keith had to say about that:

“Most people think it simply lets you download your favorite Netflix show faster, have more stable FaceTime calls, or that it makes sharing videos from your phone easier.

But 5G is much more than that…

Because with 5G, it’s possible to have wireless sensors everywhere…

Those sensors will be installed in the power grid, which he says is due for a big upgrade. He insists that it is not in a good state and the modules made by the small company are what will help “revamp the system from the ground up.”

The system needs millions of sensors, as Keith puts it:

“There are 1.58 million high-voltage transmission towers, more than 100 million utility poles, and 55,000 substations in the U.S.

That’s a total of at least 101.64 million sensors needed.

And this estimate is highly conservative since most transmission towers, utility poles, and substations will need a lot more than just one sensor.”

These sensors have to be installed on every vulnerable point across the power grid.

Keith then points out that the 4G network has proven incapable of handling these sensors, which is why 5G will prove useful:

“Because the new 5G network is capable of handling up to 1 million devices per square mile.

This means we can finally deploy sensors at every single vulnerable point across the power grid.”

“Let’s assume lightning hits a power line. 5G sensors will immediately detect the electricity overload and send this information to other parts of the grid within as little as 1 millisecond.

Switches will cut off the overloaded lines from the network in an instant and prevent a devastating cascade failure.

This kind of almost instantaneous reaction wasn’t possible with our previous wireless network.”

Therefore, Keith sees 5G as a tool that allows engineers to maintain the power grid and better deal with cyberattacks, wildfires, and blackouts.

He says that it will be used to better link the power plants, battery packs, and end-users in what he calls “a unified Energy Cloud.” It will make power production and distribution seamless.

How to invest in 5G-Volta

Keith says that the best way to invest in 5G-Volta is by buying stocks of the small company making those sensors.

He says that you shouldn’t be excited by “the usual suspects”; big companies like Verizon, T-Mobile, Samsung, and Apple for whom the 5G hype already priced in and that have limits to potential future gains. Instead, you should go for a relatively small company like the one he is touting because there is a lot more room for big returns.

So, what do we know about the tiny company he wants us to invest in:

He could be referring to a company called Akoustis Technologies Inc (NASDAQ: AKTS) that hovered around the $8 per share mark for a couple of months before starting to rise sharply in December (you can study the chart I have linked to).

It was founded in 2014 and has been focusing on an acoustic wave RF filter technology that is used for 5G applications.

To learn more about it, you can read its company information page on the official website.

He has written a report called 5G-Volta: Retire Rich on the Power Grid’s Upgrade of the Century that names the company and shares more details about it. But to get your hands on the report for free, you have to subscribe to his investment newsletter called Energy Investor, which I delve into later in this article.

Who is Keith Kohl?

Keith Kohl is an investment guru who edits newsletters like Pure Energy Trader and Energy Investor. He is the managing editor of a publishing company called Energy & Capital.

Most of what he does is seek investment opportunities in the world’s energy markets. Examples of instances he’s made significant recommendations include when he claims to have been among the first people to pick up on the US shale boom.

He claims to have recommended that his readers take the Bakken boom seriously when few people realized that newly developed fracking technology was about to create wealth.

What is Energy Investor (The Newsletter)

To receive the information you need to invest in the 5G Volta company, you have to sign up for Keith’s advisory service, the Energy Investor.

It is a follow-along investment research service through which he reveals what he believes are the best moneymaking opportunities in the energy markets. He gives general advice (not personal because he doesn’t have the authorization).

When you become a member, you are entitled to:

How much does it cost to sign up for Energy Investor?

It has a 6-month money-back guarantee

Keith Kohl’s 5G-Volta presentation gives us a different perspective on how to view the 5G rollout. While most analysts and commentators focus on 5G’s impressive internet speeds and the impact it will have on things like self-driving cars, IoT, and other nascent technologies, he is keen on how it will be used to upgrade the power grid.

Although he tells us that 2021 is the year that 5G will be meaningfully implemented, you should take that with a grain of salt because some experts believe that 5G will be gradually adopted – a process that could take years to be actualized.

Therefore, as you invest in any 5G-related stock, bear in mind that it could take longer for the benefits of the rollout to be realized.

That being said, Keith has used the pitch to bring to our attention yet another use case of 5G (for those who weren’t aware of it).