According to them, there is a massive movement happening in the stock market and it has to do with cannabis.

In this review, I walk you through the presentation pointing out the main talking points as well as detailing the offer that Tilson and his colleagues were pitching.

What is The 2021 Empire Cannabis Summit? (The Pitch)

The 2021 Empire Cannabis Summit is a presentation that was hosted by Jared Kelly. The panelists were Whitney Tilson, from Empire Financial Research, and Tom Carroll from Stansberry Research. 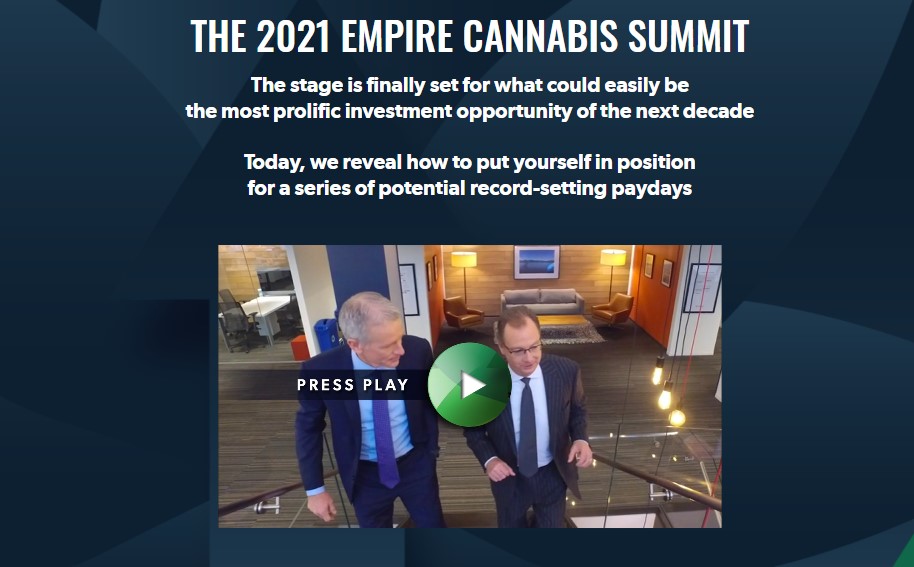 As the title implies, they were talking about investing in cannabis. They also promoted a newsletter by Tom Carroll called Cannabis Capitalist.

About investing in cannabis, they agreed that the cannabis market is due for a massive rally because it is now “maturing.” By this, they meant that the fledgling market is about to shed its “nascent” tag and become a proper mainstream market.

To explain this, Carroll says that we are about to witness the “fourth era of cannabis stocks.” He says that the first era began in 1996 when states started considering legalizing marijuana as a medical drug. The second one began in 2010 when legal cannabis began to gain traction and the third began in 2015 when massive investment drove pot stocks to the moon before eventually waning.

So in the fourth era that we are about to witness, he says that pot stocks will go mainstream making it the best time to invest in pot stocks in history. He believes a few catalysts will drive this.

The first one is cannabis companies gaining access to finance and lines of credit. Here is how he puts it:

“The first major catalyst is cannabis companies gaining access to the U.S. financial system and markets.

Soon, legal cannabis firms will be allowed to use local and national banks just like all other businesses.”

The second catalyst will be access to the main stock exchanges, which will allow institutional investors to invest in those companies.

Right now, U.S. companies are either traded on foreign exchanges or over the counter.

But soon, they could gain access to the New York Stock Exchange and Nasdaq.

This could open these stocks to millions more investors, as well as institutions that can’t legally own them right now.”

In saying this, Tom implies that institutional investors buying up cannabis stocks will have the same impact that their involvement with cryptocurrencies has had on cryptos the past year.

The third catalyst will be consolidation:

“The third major catalyst I see coming is consolidation.

With cleaner access to the banking system and capital markets, larger cannabis and consumer-product companies could begin to consolidate the market.

The well-run smaller companies could get bought up at premiums, which is excellent news for cannabis investors.”

And the fourth catalyst is the ecosystem that will be built around cannabis – the pick and shovel companies.

“And that leads me to the fourth major catalyst I think could drive the cannabis sector to record heights: Picks and shovels companies.

This means obvious things like packaging, labels, and distribution.

But other aspects of business services could get a boost as well.

He expects these pick and shovel companies to also benefit from the boom.

Tom has prepared a special report he is calling The 2021 Cannabis Explosion: Four Stocks You Don’t Want to Miss. In it, he expounds on the concept of the four eras of cannabis, the catalysts that he mentions in the presentation, and he gives details of four marijuana companies that he believes will soar.

To get your free copy of the report, you have to sign up for his newsletter, which goes by the name Cannabis Capitalist. We will discuss it later.

Who is Tom Carroll?

Thomas Carroll is one of the editors that work for Stansberry Research. He is in charge of the Cannabis Capitalist newsletter.

Before he joined the firm, he worked at Legg Mason and then Stifel Financial in Baltimore for nearly twenty years as managing director and senior analyst of healthcare. He considers himself a health care specialist (in the investment sense).

He has been featured on Bloomberg, CNBC, CNN, Fox Business, and other publications.

What is Cannabis Capitalist? (The Newsletter)

The Cannabis Capitalist is an advisory service Tom Carroll has been running since the start of 2019. It is published by Stansberry Research.

As you’d imagine, he uses it to talk about the cannabis industry and give investment recommendations.

When you join the Cannabis Capitalist, you receive the following (on top of the aforementioned report):

How much do you pay to join Cannabis Capitalist?

An annual subscription will cost $2,500 if you sign up via the presentation. Otherwise, the retail price is $5,000.

No, they don’t refund your money. Instead, you have 30 days to sample the service and if you want to cancel your membership, you can divert that money towards other newsletters offered by Stansberry Research.

In addition to the four catalysts Tom highlights in the presentation as factors that will boost cannabis, he also believes that a Democrat-controlled government will be good for the marijuana industry.

However, he is careful to not imply that they will push federal legislation because although Democrats have been known to be more pro-cannabis than their Conservative counterparts, he acknowledges that such legislation is not going to be straightforward.

If Tom is right about institutional investors being involved in the cannabis market, he could be right to be optimistic. We have seen institutional involvement drive cryptocurrencies up and although the two markets are different, you can’t deny that it will have an impact.

About the advisory service, do not just buy into it because Tom and his colleagues talk a good game in the video. Do more research into it because once you pay that $2,500, there are no refunds.