The 1 to 30 Wealth Summit is an event hosted by Luke Lango and Louis Navellier where they discuss a secret blueprint for you to advance your financial future.

They also highlight a bunch of small tech stocks that they say you can buy now to boost your investment portfolio.

In this review, we examine the main talking points of the meeting and what you can take away from it.

Introduction to 1 To 30 Wealth Summit

The 1 to 30 Wealth Summit has been getting a lot of attention because it is brought to you by Luke Lango alongside Louis Navellier, both of whom work for InvestorPlace, one of the oldest independent financial publishing firms in the country. 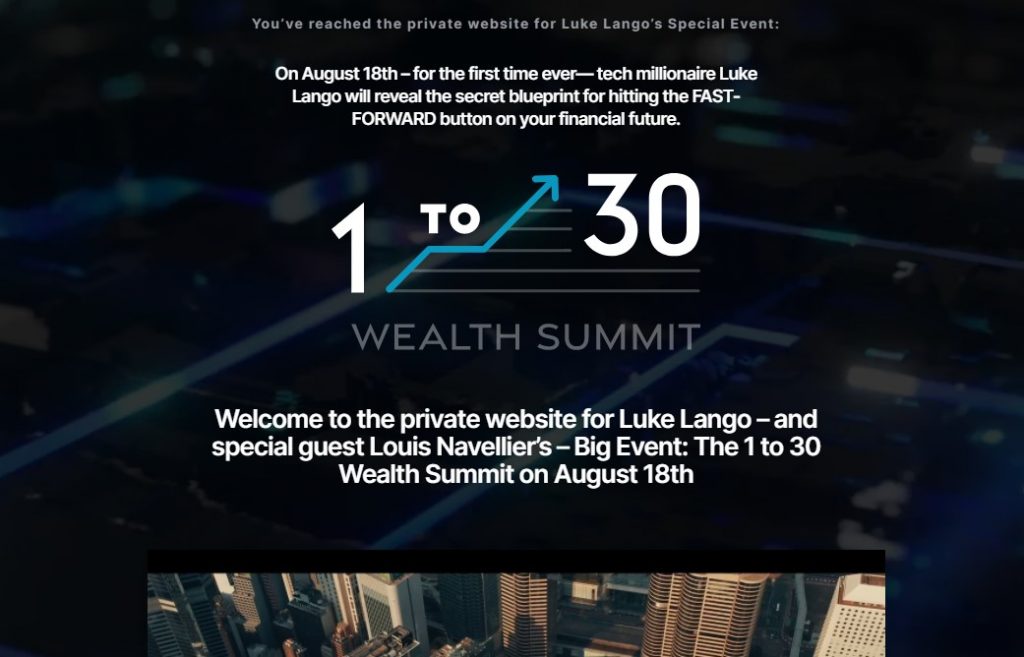 Louis Navellier is the more experienced voice who’s been behind viral presentations like I am a One Percenter and Technochasm where he has talked about his investment strategies.

Luke Lango is the rising star of InvestorPlace and his stock-picking skills have enabled him to be listed as one of the top analysts by TipRanks.com, an independent platform that rates stock pickers and investment analysts.

In The 1 to 30 Wealth Summit, the two experts promise to show you how to ascend to millionaire status, achieve financial freedom, and get your finances in order if you are retired or nearing retirement.

How do they intend to go about this?

By investing in select industries in the technology sector that they see as having great potential. Some of these industries include:

Luke Lango believes that with quantum computing, we can advance Artificial Intelligence (AI) to the levels we see in movies, improve gene editing thus eradicating some diseases, and implement cellular simulation thus fast-tracking the development of batteries.

In one of the essays, he says,

“Imagine the possibilities if we could broadly create a new set of quantum computers 158 million times faster than even today’s fastest computers.”

Therefore, quantum computing, according to Luke Lango, is likely to become a trillion-dollar industry and he says that he has identified a tiny company that is on the cutting edge of transformative technology. Luke claims that over the next decade, it could become a major stock.

Another industry Luke Lango has set his sights on is the commercialization of Space flight. 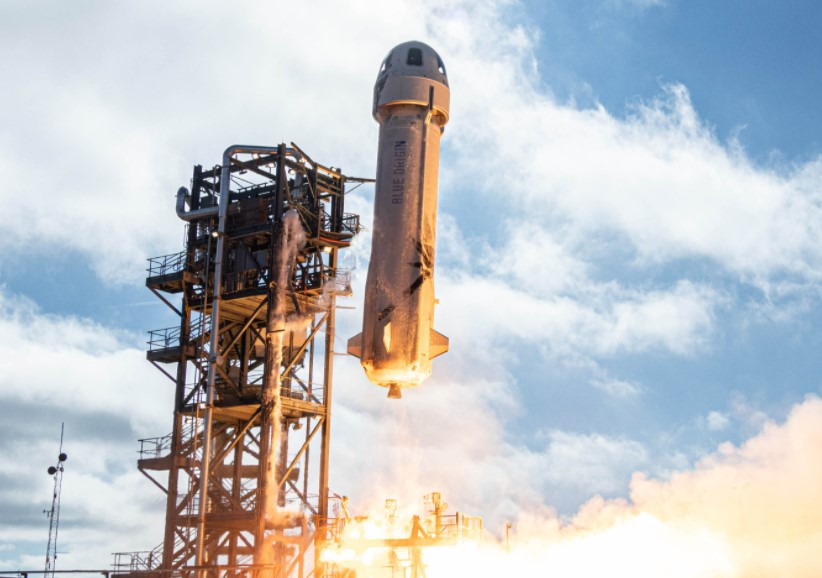 But it is a big deal it’s a bigger deal than pretty much anything else going on in the world right now.

Because those flights kickstarted the emergence of a multi-trillion-dollar Space Economy.”

Luke believes that there is more to space than those flights meant citing how satellites will have greater applications now that propulsion technologies are improving at a rapid rate.

He quotes Morgan Stanley that predicted that the space economy could be worth $1.7 trillion in 2040.

Therefore, he has identified a tiny, innovative company that is using space-based technologies to fix internet coverage and internet speed. He says that it has a 100X upside potential.

Luke Lango believes that Tesla isn’t worth that much because it is a car company, rather it is an energy company. 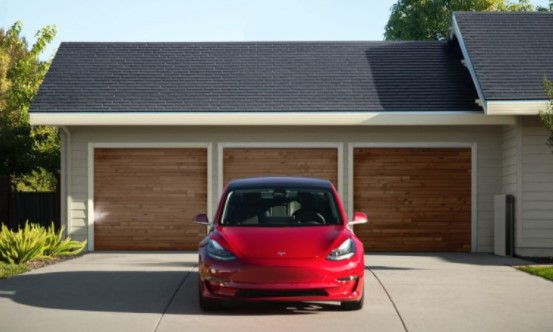 He believes that there is a major shift happening in the energy sector as companies like Tesla enable people to power their homes using renewable energy sources and remain independent of the grid. He refers to this trend as a “Distributed Energy Revolution.”

As it happens, he expects it to disrupt the $2.4 trillion electric power industry. Therefore, he says that you need to consider investing in this revolution by backing energy storage stocks because they will be at the heart of the revolution.

Out of that industry, he is bullish about one stock that is leading the energy storage game. It is a small company that is flying under the radar that he expects to become huge.

Luke Lango believes that Artificial Intelligence is going through a revolution. He claims that AI, which is prevalent now with applications like chatbots, digital assistants, and music playlist generators, is going to get even bigger. 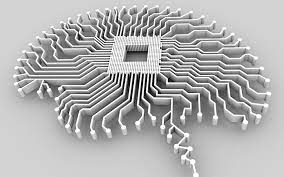 “Make no mistake. The AI Revolution is just getting started.

That’s because the machine learning (ML) and natural language processing (NLP) models upon which AI is built are informed with data. Basically, the more data they have, the better the models get, and the more capable the AI becomes.

The volume and granularity of data globally is exploding right now, mostly because every object in the world is becoming a data-producing device.”

Therefore, with more data, the AI programs learn more because they have more reference points to process, a core tenet of machine learning.

As the AI revolution happens, Luke says that you need to be invested in AI stocks. And, of course, he has identified one AI stock that has robust technology and has applications that are disruptive in a huge market. It has the talent needed and its growth trajectory is great.

Who are the investment analysts behind the 1 to 30 Wealth Summit?

Luke Lango is an investment analyst who has been active in the financial services industry for a couple of years.

He got a near-perfect score on his SATs and ACTs and was selected as an NBA top 100 high school prospect.

He has been working on computer models and was working with the Philadelphia 76ers’ front office to design data analytics models to analyze incoming draft prospects. He was even asked by the former general manager of the Dodgers to be a founding member of his sports data analytics business.

Luke Lango started a social media company with the backing of Bill Gross.

He started making stock market predictions from his dorm room at Caltech and that’s when he started getting a lot of attention. He was known for his bold calls that ended up being profitable. For example, he talked about AMD in 2015 when it was trading at $2 (it has since gone up by 4,855%). He also forecasted the growth of Spotify in 2017 as well as Roku and Netflix before they became household names.

His biggest achievement was becoming the #1 ranked stock picker in 2020, according to TipRanks, a leading independent financial accountability group. 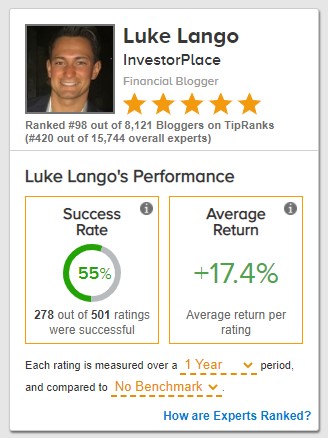 Before he joined InvestorPlace, he was a founding manager at L&F Capital Management LLC, a boutique investment fund based in San Diego that combined quantitative analysis with behavioral economics to identify long-term growth investments before they happened.

Louis Navellier is a legendary investment analyst who’s been active for over three decades. He is a money manager and his fund management company manages more than $1 billion in private and institutional accounts.

He is best known for his growth investment philosophy, on which he bases his most popular advisory service, Growth Investor.

Louis Navellier also uses computer-based systems in stock analysis and was once even labeled “King of Quants” by Forbes Magazine. His interest in the quantitative analysis was piqued in college when he wrote an algorithm that beat the S&P by a factor of 3 to 1.

Ever since Navellier has been using quant-based systems and has identified a couple of household-name companies when they were trading for peanuts. For example, he talked about Home Depot when it was still much smaller than it is today and also claims to have been one of the first people to recommend Microsoft, Nike, and Intel.

He got mainstream recognition for his track record and has been mentioned by CNBC, The New York Times, and MarketWatch.

Louis Navellier published a book called The Little Book That Makes You Rich that was critically acclaimed.

Closing Remarks on 1 To 30 Wealth Summit

Luke Lango and Louis Navellier are expected to unveil a brand-new portfolio with seven hypergrowth technology stocks, each with a 30X upside potential. They call it Operation Wealth Speed because these are stocks that they think will transition from small-cap to large-cap fast.

This isn’t the first time we are seeing a presentation about technology stocks that are expected to grow fast. However, it will be interesting to see what the two analysts have lined up.